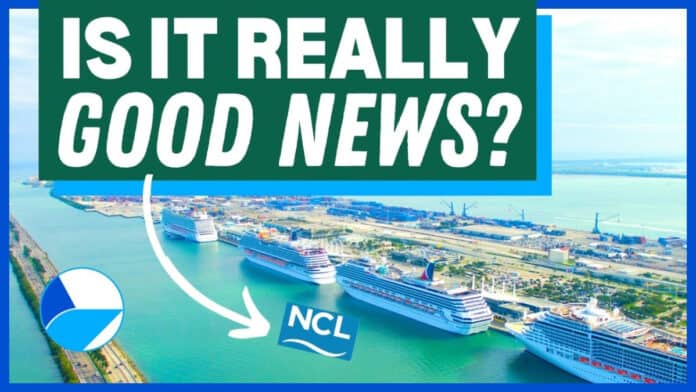 It’s finally happened! The cruise industry is moving forward, and it’s now really possible that cruises could start to resume in the middle of July. But for one cruise line, it could be too late, and is it all really good news?

What a week of cruise news we’ve had! For the first time since cruise lines first suspended operations, we now have some real hope of a summer restart. It looks like the pressure worked as the CDC’s maritime team has been meeting with cruise lines and ports twice-weekly over the past month to resolve the issues on resuming cruises.

Also, don’t forget all the other cruise news, including new ship reveals from Disney and Celebrity Cruises, a morale boost from the Carnival Cruise Line President, vaccinations begin at the second busiest cruise port in the world, and not so good news with Norwegian Cruise Line deciding to cancel most departures from the U.S. through the summer.

So it actually happened! yes, the CDC listened to all the state officials, cruise lines, ports and of course the most important, the cruisers. The industry has in fact been in discussions with the CDC twice-weekly for the past month to work out an easier way on resuming cruise operations in the U.S.

Late on Wednesday night, the CDC came out with a letter that detailed some revised requirements that cruise lines need to follow. There are still instructions to work through but now it’s all mainly workable and for the first time we might actually see cruises start to resume by mid-July.

One of the biggest changes is that ships can bypass the required simulated test voyages carrying volunteers and jump to sailings with paying passengers if 98% of crew and 95% of passengers are fully vaccinated.

The CDC Letter to Cruise Lines: What It Means

It’s a huge breakthrough for cruises and without tests voyages, that’s a big chunk of preparation out of the way. But is it all this really good news? Do remember there is still a lot to do to make sure guests and crew can remain safe. There is also the big question about kids as the vaccine rollout is not yet aimed at those under the age of 16. The majority of families might have to hold on a little longer until more kids can get vaccinated to be able to go on a cruise.

The second busiest cruise port in the world will now be able to offer its workers and vessel crew members vaccinations due to the Florida Public Health Advisory being approved on April 29.

It does now mean that the vaccine eligibility has been expanded to include those who are in Florida for the purpose of providing goods and services. This includes the crew members that enter the state from other countries and work on cruise ships.

Port Canaveral will provide up to 1,000 vaccination shots per day for vessel crew members and port support personnel. The vaccination model has been developed with the Parrish Healthcare Center at cape Canaveral, Canaveral Fire Rescue, and cruise line medical personnel. Officials at the port were also guided by the U.S. Coast Guard, U.S. Customs, and Border Protection.

Cruise lines play a major role at the port and have done so well to make the new vaccination program a reality. In fact, on Friday, the first people under the new eligibility received their vaccination by the port. It’s also in line with the CDC’s newly updated instructions detailed recently in a letter sent to cruise lines.

Despite Carnival Cruise Line being in total shutdown, crew members aboard the Carnival Sunshine cruise ship had the chance to enjoy a visit from Christine Duffy, the president of Miami-based Carnival Cruise Line. It was also the first ship in the fleet Duffy visited since the suspension on operations first began back in March 2020.

The vessel was docked at Terminal E in PortMiami on Wednesday with no passengers on board. Duffy spent time onboard meeting with senior officers and toured the ship. At the moment the ship does not have its full complement of the crew but she still took time to meet with those crew members who are on board to keep essential services maintained and preparing for when the cruise line does eventually restart operations.

Carnival released photos of the visit from various locations on the Carnival Sunshine including the bridge, engineering, lido deck, and on the I-95, often a hive of activity when cruise ships are in full operation.

Disney Cruise Line has revealed all the details of the new Disney Wish cruise ship that will arrive in 2022. We finally get a full look at the new vessel with new renderings released, ship facts, itinerary details, and more as she will become the fifth ship in the fleet.

The new vessel will have some brand new features and one of the main highlights will be a splashtacular adventure with Mickey Mouse and Minnie Mouse aboard the first-ever Disney attraction at sea. There will be a “Frozen” dining experience, a Marvel cinematic dining adventure, and the first of its kind Star Wars experience.

In summer 2022, the Disney Wish will sail its inaugural season of three- and four-night cruises to Nassau, Bahamas, and Disney’s private island, Castaway Cay, from its new homeport of Port Canaveral, Florida. Bookings open to the general public on May 27, 2021.

Disney Wish will greet its first guests on June 9, 2022, for a special five-night maiden voyage that includes two days at sea and stops in Nassau and Castaway Cay. On June 14, 2022, Disney Vacation Club will host a three-night, members-only cruise to Castaway Cay.

The Royal Caribbean-owned cruise line finally revealed details of the much anticipated Celebrity Beyond, which will be the largest ever cruise ship and the third in the Edge-class.

Celebrity Cruises President and CEO Lisa Lutoff-Perlo unveiled the vessel on Wednesday in a virtual event that also featured the ship designers and Richard Fain, the Royal Caribbean Group president.

The ship has been stretched by 20 meters, and even her height increased to 17 decks to provide a more spacious feeling onboard. This will also allow for some of the highlight spaces onboard, including the reimagination of The Retreat, the Resort Deck, and the Rooftop Garden. Some of the main highlights of the new ship are:

The new Edge-class cruise ship is currently under construction in France and will be around 140,000 gross tons. She will debut out of Southampton, UK on April 27, 2022, on a 10-night Western European cruise.

She will then offer a variety of Mediterranean journeys including nine-night Italian Riviera and France itineraries and 10-night Greek Isles itineraries through early October when she then heads to the Caribbean.

We’ve had some major cruise news coming out from Norwegian Cruise Line this past week as the cruise line has now extended its suspension on the majority of U.S. departures through all of the summer. It came just days before the new updated CDC requirements were released so pretty bad timing for NCL.

Some of the cancellations from the U.S. go as far back as November which is no doubt very disappointing to many cruisers who were hoping of a summer cruise with NCL. So here are the latest round of cancellation dates released by the cruise line:

However, not all is lost as the cruise line continues to shift vessels to alternative homeports outside the United States. Norwegian Gem regular sailings are canceled through November 17, 2021, as she will be offering new voyages out of the Dominican Republic from August 15, 2021. Norwegian Epic and Norwegian Getaway will begin sailings in the Mediterranean from September. Norwegian Jade will start sailings from Athens and Norwegian Joy will also start cruises in the Caribbean this summer.

The Cruise Line also extended its temporary Peace of Mind cancelation policy to guests sailing on cruises with embarkation dates through October 31, 2021. These guests have the flexibility to cancel their cruise 15 days before departure.

It has just been another hectic week in the cruise industry and those were just a handful of the biggest stories. We’ve got all the latest including more bad news for a cruise restart in Alaska, the latest situation with cruise ships in Key West, a second Royal Caribbean cruise ship to homeport in Barbados, a tough decision on the crew by Royal Caribbean, new mask guidelines from the CDC, more cruise lines restarting this summer and much more.

You can also take a look at last week’s cruise news update here.