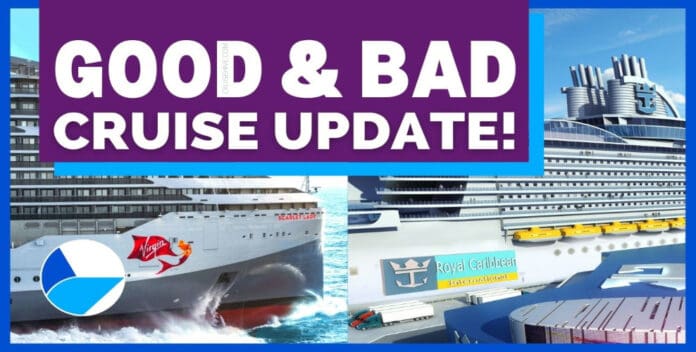 Here we go with another busy week of cruise news updates. It’s been a mixture of good and bad news across the industry and around the world.

It has been just another non-stop week in the cruise industry with many new developments as most cruise lines remain on hold.

We’ve had some good and bad news including cancellations and new UK-only sailings from two cruise lines, a major update from Virgin Voyages, Port Canaveral being ready for Carnival’s new Mardi Gras, a further ban for cruise ships in Australia along with some positive news from Royal Caribbean and MSC Cruises. We’ve got lots to get through so let’s get started.

British cruise operator P&O Cruises announced it would be canceling all voyages onboard all of its ships until August and into September. However, all is not lost as P&O Cruises is preparing to offer “the ultimate escape” staycation this summer.

The company hopes to offer guests an opportunity to cruise around the British Isles this summer but it does mean the cancellation of regular sailings. So Arcadia, Aurora, Azura, and Ventura regular cruises have been cancelled until the end of August 2021 and on Britannia and Iona until the end of September 2021.

The new UK-only cruises will depart from Southampton and sail around the UK coastal waters. P&O Cruises will be announcing further specifics on the new sailings later in March.

Princess Cruises has released a major update on its operations out of the UK following a UK government announcement on a framework on reopening international travel.

The UK’s Global Travel Taskforce chaired by The Secretary of State Grant Shapps met for the first time on March 2 to discuss a plan that will be submitted to UK Prime Minister Boris Johnson on April 12, 2021.

So this does mean that the cruise line has extended its pause on regular European sailings to and from the UK, including roundtrip from Southampton through September 25, 2021, on Sky Princess, Regal Princess, and Island Princess.

The good news is that Princess Cruises will be offering new UK cruises. All we know at the moment is the cruise line will launch a series of new short cruises departing in late Summer on Regal Princess and Sky Princess out of Southampton. More details on this will be released later in March 2021.

Virgin Voyages has followed many other cruise lines by extending its pause on operations further into 2021 for Scarlet Lady. Cruises have now been canceled from May 9 through June 30.

Those guests impacted by the latest round of cancellations have two different options unless their voyage has been canceled before. The first option for guests is a 200% Future Voyage Credit of the amount paid to date towards the voyage fare, which can be applied to another sailing, rather than a refund.

The second option for affected guests is a refund option, which means a full refund of everything paid along with a Future Voyage Credit equal to 25% of the existing paid voyage fare to be used on a future sailing.

Innovation in the cruise industry continues to move forward during the suspension of operations as Port Canaveral is now ready with LNG. The new Q-LNG 4000 arrived at the port which is an articulated tug and barge (ATB) able to offer safe and reliable delivery of Liquified Natural Gas (LNG).

It has been nicknamed Q4K and the project has been in the making for four years. The barge has the capacity to fuel up to two cruise ships with a 7-day itinerary each.

When the Q4K arrived at Port Canaveral recently it was actually conveniently docked at Port Canaveral’s new Cruise Terminal 3 which was completed in June 2020. The terminal has been constructed for Carnival Cruise Line and the new LNG-class cruise ships.

Mardi Gras, Carnival’s first fully powered LNG cruise ship is currently in Barcelona, Spain but she will soon be heading across the Atlantic to the port. The huge 180,000 gross ton vessel will be fueled using the new barge, kicking off a new era of eco-friendly fueling for the port and North America.

MSC Seaside to Resume Sailings in May 2021

Even though most cruise ships remain on hold worldwide, MSC continues to move forward on new ways to keep some of its ships moving. MSC Seaside, a popular MSC vessel that has been sailing out of Miami in the past will begin cruises this May for the first time since the suspension of operations.

So the new 7-day itinerary for MSC Seaside will include calls to Siracusa and Taranto which are both in Italy. The first voyage will depart on May 1, 2021, out of Genoa and it will be a 7-night voyage. The itinerary will be sailing five times during the month of May departing on the 1, 8, 15, 22, and 29.

Measures will include universal testing at embarkation as well as mid-cruise, weekly testing of the crew, social distancing, the wearing of masks in public areas, only protected shore excursions as well as enhanced deep sanitation and ongoing cleaning procedures.

The human biosecurity emergency period which includes the ban on cruise ships and has been in place since March 17, 2020, will be extended by an additional three months until June 17, 2021.

The measures almost completely ban all international travel to Australia. This will impact a number of cruise lines that operated from the country including P&O Australia.

According to Joel Katz, the CLIA Managing Director, the industry is disappointed with the decisions made, although it does understand them. Whether cruise ships will be sailing in Australia depends on the Government. CLIA says it is working with the Government on a resumption of cruising in Australia. But when cruising can return to Australian waters remains unclear and we have not heard any specific dates on the framework.

Allure of the Seas to Homeport in Galveston from 2022

Royal Caribbean has announced that one of its largest cruise ships in the world will homeport out of Galveston, Texas, from November 2022. The Oasis-class vessel will sail 7-night Western Caribbean itineraries from the popular cruise port.

Allure of the Seas will make calls to Roatan, Honduras, as well as Cozumel and Costa Maya. The first voyage will depart on November 27, 2022, and the final 7-day cruise will depart on April 23, 2023. The ship will be based from Galveston on a seasonal basis for the cruise line’s 2022-23 winter season.

What’s also exciting about this announcement is that by the time Allure of the Seas starts sailing from Galveston, the new terminal will be completed. Back in 2019, Royal Caribbean did already announce the ship would be sailing out of its new terminal at the port. However, things have changed since then, and construction was delayed.

Construction on the new state-of-the-art terminal will finally begin in April 2021 and be completed just in time for Allure’s arrival in fall 2022. The two-story facility is costing $100 million with a total of 170,000 square feet.

The mega cruise ship is 225,282 gross tons with a guest capacity of 5,484 at double occupancy along with 2,200 international crew members.

Odyssey of the Seas to Sail Vaccinated Guest from Israel

A remarkable announcement from Royal Caribbean confirmed Haifa in Israel to be the homeport for Odyssey of the Seas in May of this year. The cruise line’s highly-anticipated new ship, will offer Israelis a combination of 3- to 7-night getaways on the Greek Islands and Cyprus. The new sailings will go on sale on Tuesday, March 9.

Apparently Royal Caribbean has been eyeing up cruises out of Israel for sometime so who knows what other surprising new homeports it has lined up!

The first guests to cruise on Odyssey of the Seas during its inaugural season will be residents of Israel. This ship is designed to provide every kind of traveler with an unforgettable vacation. Benjamin Netanyahu, Israeli Prime Minister, said that the Israeli government is proud to offer Royal Caribbean the opportunity to sail from Israel.

So those were just some of the cruise headlines from the week, we’ve got even more big headlines including AIDA Cruises canceling more sailings and extending a season for one of its ships, the UK’s Saga Cruises extending its suspension, new specialty restaurants introduced on MSC Virtuosa, the latest on Royal Caribbean homeporting in Cozumel and many more stories.

We’ve also got an extremely detailed guide on when each cruise line currently plans on resuming cruises. You can even see all the updates since suspensions first started back around a year ago.

You can watch last week’s cruise news update if you need to catch up on even more.