Here's the latest developing cruise news from the week and things are heating up as the cruise industry adds more pressure. 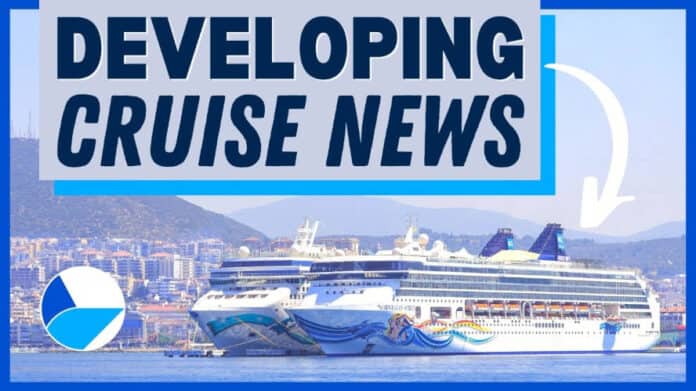 It has been just another busy week within the cruise industry with frustrations growing as ships remain on hold from the U.S. but hope in other countries as cruise lines find alternative solutions.

There is hope with cruises set to return but not out of the United States. That’s right, the cruise industry vs the CDC is starting to get intense and everyone is getting in on the action. We’ve got all the latest on that along with new homeports for Royal Caribbean and Celebrity Cruises, redeployments on the way from Norwegian Cruise Line, and an update from the Carnival Cruise Line president.

Celebrity Cruises to Homeport in Greece

Alright so let’s start with Celebrity Cruises which has announced that its newest ship, Celebrity Apex will homeport out of Athens, Greece starting on June 19. The second Edge-class cruise ship will offer seven-night round-trip cruises out of Athens through September 2021.

She will be calling at Mykonos, Rhodes, and Santorini in Greece along with Cyprus and even a call in Haifa and Jerusalem in Israel. Those who do want to enjoy the new offerings will need to be fully vaccinated and that goes the same for the crew members. Those guests under the age of 18 won’t need to be vaccinated but must prove a negative test.

This news follows Celebrity Millennium that will homeport out of St. Maarten from June and offer Caribbean cruises.

Royal Caribbean to Homeport in Cyprus

Royal Caribbean continues its plan b by shifting ships away from the U.S. The cruise line will base Jewel of the Seas out of Cyprus starting on July 10 through October 2021.

The cruise line expands its offerings in the Mediterranean with the vessel sailing 7-night cruises and calls include Athens, Rhodes, Crete, Mykonos, and Santorini.

Bookings for the new offerings on Jewel of the Seas will open on April 7, 2021, and for fully vaccinated adults only. Those under the age of 18 will need to show proof of a negative test. The cruises will be fully protected as all crew members will also be fully vaccinated.

With cruises in the U.S. still on hold, Royal Caribbean has already announced new cruises out of Israel and Bermuda for this summer.

Norwegian Cruise Line has canceled many cruises that impact five cruise ships. The cruise line is planning a major redeployment for the summer through as far forward as November 2021.

The only reason the cruise line gave within letters that were sent to impacted guests was due to redeployment. NCL also confirmed to Cruise Hive this week that a newly revised schedule will be announced very soon. There are rumblings that the new deployments could be for summer sailings in the UK or even new homeports in the Caribbean.

Pressure is mounting on the CDC after several pushes on lifting the Conditional Sailing Order that has been in place since November 1, 2020. It has been almost five months now, and the CDC is still in the first phase of the four-phased framework.

It’s clear that the cruise industry has had enough. The Cruise Lines International Association (CLIA) has already urged the CDC to lift its Conditional Sailing Order and allow cruises by July.

The Florida Governor has held a roundtable discussion at Port Canaveral too, to discuss the situation with industry leaders including cruise line executives. The cruise lines have clearly had enough and Royal Caribbean group has already started shifting vessels away to alternative homeports outside the U.S.

Even the Miami-Dade Mayor has sent a letter to the CDC director requesting a meeting regarding resuming cruise operations. An Alaska senator also recently questioned the director for further details and a timeline on resuming cruises but the director was unable to do that.

In fact, the CDC has already stated that the Conditional Sailing Order is still in place until November 1, 2021, and it was an inter-agency decision. However, pressure continues to mount with more officials urging the order to be rescinded and for cruises to be allowed from the U.S. from the summer.

The entire situation remains very fluid and almost daily now, there are new developments between the cruise industry and the CDC.

Carnival Cruise Line President Christine Duffy released a new video update and she made it clear that no decision had yet been made on guests requiring to be vaccinated.

She also mentioned that no decision had yet been made on June sailings, this comes as Norwegian Cruise Line has already suspended its operations through June 2021.

However, Duffy did say that Carnival has adjusted its cancellation dates to provide guests further peace of mind if Carnival did eventually extend its suspension through June.

She also covered a hot topic at the moment which is homeports outside the United States. we already know Royal Caribbean is doing this but Duffy said Carnival is America’s cruise line and made it clear that Carnival ships would remain based out of U.S. ports.

There has been so much cruise news this week and including two more cruise lines announcing UK sailings, Jamaica possibly becoming a homeport, upcoming P&O LNG ship to homeport in the Caribbean in 2022, Costa Cruises to resume operations, and a lot more news coverage.