All the huge cruise news from the week covering major cruise lines and the restart of operations in the U.S. 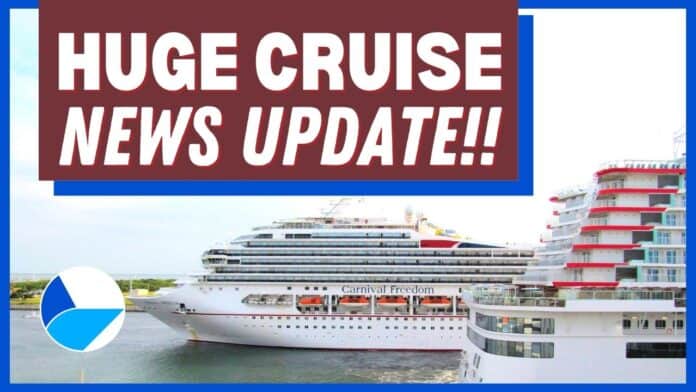 Here we go with another busy week of cruise news as even more cruise ships are approved to restart operations, and cruise lines are busy planning the comeback.

Cruising is making a comeback worldwide, especially in the U.S., where the industry has been on hold for more than 15 months! In this week’s update, we’ve got it all, including Carnival Cruise Line released its plans for August sailings, more cruise ships approved for sailings, an extended ban in Australia, Norwegian Cruise Line making a return in the U.S. in August, and loads more news. It’s been busy for sure, so let’s get started on all this huge news.

Carnival Cruise Line has announced which cruise ships will resume operations in August, and the plan also includes the new Mardi Gras, which recently arrived in the U.S. for the first time. It comes as the cruise line ramps up its restart plans after already detailing the ships that will resume in July.

So here is what’s happening for August:

Even though more vessels will return, it confirms which ships will have to remain on hold even further. As a result, Carnival Cruise Line has extended its suspension through August 31, 2021, for the following ships:

The cruise line plans to bring more ships back to service in September and through the remainder of the year. The cruise line is busy making sure crew members are fully vaccinated on any ship that resumes operations to ensure the cruise experience can be as fully protected as possible.

Odyssey of the Seas Arrives in Fort Lauderdale

After arriving in the U.S. for the first time on June 4, Odyssey of the Seas arrived at her homeport in Fort Lauderdale. The second Quantum-ultra class ship will now begin preparations to begin passenger cruises in July. She will sail 6- to 8-night Caribbean cruises through April 2022, starting on July 3, 2021.

The Royal Caribbean cruise ship was previously scheduled to begin sailings out of Israel but due to the unsafe situation in the country, it was decided by the cruise line to pull the ship out and redeploy her to the U.S. earlier than planned.

Odyssey of the Seas was built at the Meyer Turku shipyard and delivered to Royal Caribbean on March 31, 2021. She’s 169,000 gross tons and has a guest capacity of 5,498 at double occupancy, along with 1,550 international crew members.

Holland America has provided an update on cruise operations in Europe, and it has been decided to cancel the remainder of the summer 2021 season for Nieuw Statendam and Volendam. This impacts the European sailings with departures from September through November 2021 and the Collectors’ Voyages (combined cruises) associated with those departures.

Holland America’s new Rotterdam cruise ship, which is currently under construction at the Fincantieri Marghera shipyard in Italy, is still scheduled for delivery on July 30, 2021. However, the new vessel will remain on hold with no passenger operations until the inaugural voyage on September 26, 2021, from Amsterdam, Netherlands. Rotterdam’s naming ceremony date is also to be decided at a later time as the cruise line is finalizing its plans.

This announcement comes as Holland America continues to work with the relevant governments on a safe return to operations. Plans also continue with all the different ports as the cruise line aims for a phased-in return to service.

Australian Health Minister Greg Hunt has extended the human biosecurity emergency period which has already been in place from March of last year until September of 2021. The ban was previously set to expire this month. According to the health minister, the current pandemic continues to pose an unacceptable risk to the Australian public.

The cruise industry has been in talks with the Australian Government for many months now on how the cruise lines can resume Down Under. There was expected to be a pathway forward for sailings to resume along with indications from the Tourism Minister that the measures would be easing slightly.

Adventure of the Seas Resuming Cruises

On Tuesday, Royal Caribbean’s Adventure of the Seas arrived in Nassau, Bahamas ready to begin cruises for the first time since suspensions first started in March 2020. In fact, the ship is departing today!

Yes, finally, Adventure of the Seas will kickstart 7-Night Bahamas & Perfect Day cruises with real passengers onboard. The sailings are for fully vaccinated guests only and all crew members onboard are already fully vaccinated too.

Even more Royal Caribbean cruise ships will restart through the coming months as follows:

Celebrity Cruises continues to move forward with its restart plans out of the U.S. as the CDC has now approved Celebrity Equinox to resume operations. The ship will begin sailings out of Fort Lauderdale, Florida, on July 25, 2021. She will offer seven-night itineraries, including calls at Cozumel and Costa Maya in Mexico and Nassau in the Bahamas.

This follows Celebrity Edge which is scheduled to begin cruises from the same port on June 26, the first cruise ship to resume cruises from the U.S. since suspensions first started in March 2020.

Here are the other eight vessels in the fleet returning to service in addition to Celebrity Equinox:

Just like all the other Celebrity cruise ships that are resuming operations, Celebrity Equinox from Fort Lauderdale will be for fully vaccinated guests only.

Norwegian Cruise Line has already released details on restarting operations to Alaska and out of five US ports through the fall. The cruise line has now released further details on a restart from the US in August, with the newest ship in the fleet sailing to Alaska and cruises restarting from Miami.

Norwegian Gem will kickstart cruises out of PortMiami on August 15, 2021. The ship will sail seven-day itineraries to the Caribbean and a four-day voyage to the Bahamas in November.

Norwegian Cruise Line has already announced that all guests and crew members will need to be fully vaccinated on cruises that depart through October 31, 2021.

So that’s it for another jam-packed week of cruise news! We’ve got even more coverage including Royal Caribbean’s president and CEO clearing up complicated vaccine protocols, Carnival Cruise Line releases specific health protocols for Texas sailings, Scotland denies MSC’s newest cruise ship, two passengers testing positive on Celebrity Millennium, a further suspension from Disney Cruise Line and many more stories all over on the web site.