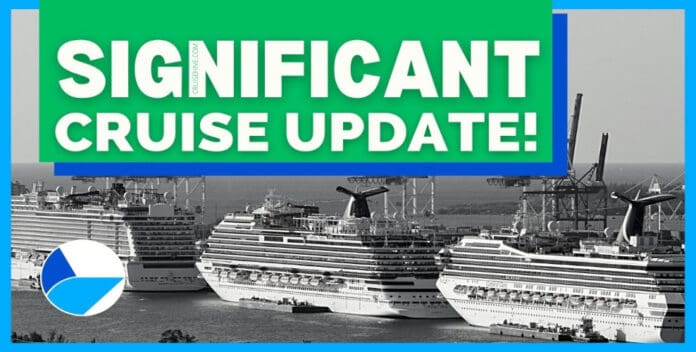 Here we are once again with a significant cruise news update as the industry continues to be suspended and we see even more cruise ships now being scrapped.

We’ve really had a crazy couple of days this week with Canada’s government deciding to ban cruise ships an entire year, we’ll get more into that and the reaction from the cruise lines later in the video.

We’ve got more sad news with cruise ships being beached and scrapped, new health policies from Carnival Cruise Line, lots of complications with the CDC requirements on resuming cruises, and more. So let’s get started!

We start with the onerous task cruise lines have to resume cruises. A Senate Transportation Committee meeting which took place this week it was made painfully clear what the current state of the cruise industry in Florida is facing. It’s proving to be toilsome and there is a long road ahead before sailings can effectively resume.

Michael Rubin, the Florida Ports Council government representative, told members of the Senate committee that it could be months before a resumption will happen. It could also be 2022 or later before we see cruises on any significant level, let alone the same levels as pre-pandemic.

According to Rubin, cruise lines and ports are working through an “onerous” list of requirements from the U.S. Centers for Disease Control and Prevention and hope to have at least some vessels operating at half capacity this summer.

He went on to say that some of the smaller luxury cruise lines may not be able to operate until vaccines are available globally. He said that although the pandemic’s impact varies by port, combined, the financial impact could reach $22 billion. A port like Panama City (FL) is handling more cargo, while Port Canaveral’s operations traditionally involve cruise operations 70% of the time.

We’ve got further details in our full article on cruisehive.com along with the difficulties the cruise industry is dealing with in the U.S. at the moment.

There are currently six former Carnival cruise ships that are now being scrapped. It also ends the once-popular Holiday-class, a class that helped grow the Miami-based cruise line into what it is today.

At the Aliaga shipbreaking facility in Turkey, there are another three former Carnival cruise ships being scrapped. Carnival Fantasy is almost completely gone, and what’s left of her is alongside sister ships Carnival Imagination and Carnival Inspiration. It really is a sad ending for these once popular vessels and with so many memories.

While we’re on the topic of ships being scrapped. The Costa Victoria which was formerly operated by Carnival-owned Costa Cruises was beached in Aliaga, Turkey recently.

It wasn’t a simple beaching as the ship had some propulsion issues. Cruise Hive reported in January 2021 that the ship would be towed to the scrapyard by a tug boat from Italy. She can now be seen beached in an awkward position, which is likely due to being towed.

The ship was sold by Carnival Corp back in summer 2020. It was hoped Costa Victoria would be used to accommodate shipyard workers, but unfortunately, that plan fell through. She first entered service for Costa Cruises in 1996 and has sailed for Costa until the pandemic hit.

Carnival Cruise Line has released new COVID health policies and procedures to make sure guests remain safe during a cruise vacation. Maybe after reading through everything it might not feel like a cruise vacation.

The cruise line has developed the new policies with guidance from authorities around the world including the U.S. Centers for Disease Control & Prevention. A lot of the new protocols are expected such as mask-wearing around the ship, social distancing, and checks before embarkation.

The cruise line could bring in new wearable tech and use videos for contact trancing and guests will have to have temperature checks done daily. We got some first details of what the impact on port of calls would be.

Carnival could limit port visits and guests may not be allowed to leave the initial port area. Guests won’t be able to go off on their own and explore and only be able to book tours that have been vetted by the cruise line.

The biggest take from this is that Carnival is going to really take these measures seriously. Guests will have to follow the new policies put in place and the policy details could change even further as the situation remains very fluid.

You can read through all the details over on cruisehive.com or read through the entire content on the official Carnival site.

Well, we come to the biggest news of the week, or should I say the biggest shock of the year so far for the cruise industry. Canada has made a huge decision to ban cruise ships for an entire year. The ban will now remain in place until February 28, 2022. This impacts all cruise ships, which can carry over 100 passengers.

The announcement was made by the Minister of Transport on Thursday. The reason for the ban is due to the evolving pandemic and keeping workers in the transportation sector safe and healthy. The government has stated that cruise vessels in Canadian waters pose a risk to its health care systems.

There is some hope though if the situation improves such as the vaccines starting to make an impact then the Minister of Transport has the ability to rescind the Interim Orders.

So how do the cruise lines feel about all this, was it expected? It definitely wasn’t! in fact, multiple cruise lines released statements within hours of the Canadian government’s announcement. Within minutes of the news coming out, cruise lines responded on social media, saying they also just found out about this and were surprised.

All the major cruise lines had cruises scheduled for Alaska this season and it’s looking likely these will now be canceled unless something magically is announced allowing cruises to sail.

This is all due to the Passenger Vessel Services Act where cruise ships departing from a U.S. port must visit a foreign port. Some cruise lines that are registered in the U.S. will still be able to sail but you can forget about any of the larger cruise lines such as Holland America, Princess Cruises, and Royal Caribbean.

The Cruise Lines International Association (CLIA) did release a statement in reaction to the year-long ban. Charlie Ball who is the Chair of CLIA in North West & Canada said that its members were very surprised at the length of the ban and hoped that there would be an opportunity to revisit the timeline.

He went on to state how important the cruise industry is to the Canadian economy and two years without cruising could have irreversible consequences for families throughout the country.

Those were just some of the topics we covered throughout the week. There are even more cruise stories including should we forget about the 2021 Alaska season, Cozumel looking into becoming a homeport, Fred Olsen Cruise Line suspends cruises until the end of June, how flight restrictions could impact cruises, Majesty of the Seas possibly heading for scrap, new MSC cruise ship delivered and a lot more.

You can also take a look at last week’s cruise news update if you need to catch up on even more.