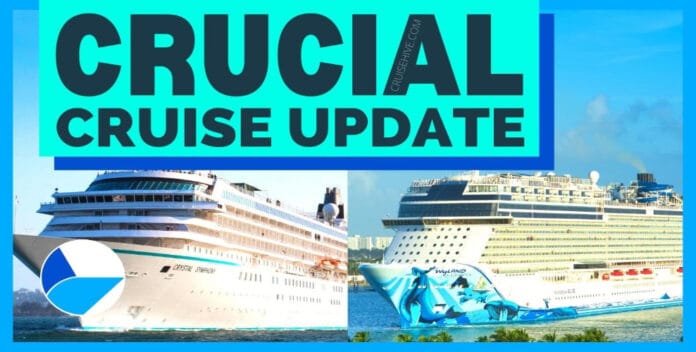 It has been a busy week of cruise news! Did we just have the biggest hint yet of cruises being suspended for even longer and is it just a matter of time until all the major cruise lines issue vaccine requirements? Let’s get into it all in this crucial update on the cruise industry.

It has been a crucial week for the cruise industry as more cruise lines have now started to extend their suspensions into Summer 2021. Vaccine requirement for a safe return of cruising seems to be a growing trend and there are many more updates including return dates for two Carnival-owned cruise brands, the name of P&O’s next excel-class mega-ship, new options for Carnival cruises that are seven days or less, and more. We’ll also get you updated on new extended suspensions announced from four cruise lines.

We start with Carnival-owned Costa Cruises which is now aiming to resume operations on March 27, 2021. The cruise line has scheduled an Italian itinerary from the end of March, while May will see cruises to international destinations.

The first ship to start sailing will be the company’s flagship vessel Costa Smeralda. Scheduled for March 27, 2021, the vessel will be sailing on 7-day itineraries in Italy for one month before her itinerary will change to one-week cruises in the Mediterranean.

A second ship, the Costa Luminosa, will be joining Costa Smeralda from May 2, 2021. The ship is scheduled to sail from Italy on cruises departing and arriving in Trieste.

Costa plans on more ships kickstarting operations with Costa Deliziosa on May 29 out of Venice, Costa Magica on the same day from Bari, Costa Pacifica out of Barcelona also on May 29 and Costa Firenze out of Genoa on May 30, 2021.

You can check all the specific details on itineraries and health measures in our full post over on cruisehive.com.

AIDA Cruises will be opening its Spring 2021 cruise season on March 20. Originally scheduled to start on March 6, the cruise line had been forced to postpone due to various restrictions placed by the German government.

There will be strict health measures in place to make sure all guests and crew remain safe. This will be a clear sign to authorities around the globe that cruises can resume safely.

The crucial shift towards needing a vaccine to go cruising is growing as Crystal Cruises has now become the largest cruise operator so far to issue this requirement.

So on February 18, 2021, Crystal announced that all guests will need to prove that they have received a COVID-19 vaccine at least 14 days before boarding.

The requirement is in addition to the cruise line’s health protocols, and the proof will have to be shown before embarkation. There will still be a need for a negative test and health screenings.

The cruise line does expect crew members to be vaccinated but understands the availability in their home countries. For now, it’s not a requirement, but the crew will still need to have a negative test and meet all the health protocols in place.

Once vaccines are widely available, Crystal Cruises will alter its stance and the crew will need to be vaccinated 14 days prior to joining their vessel.

We finally know the name of P&O Cruises’ second excel-class cruise ship. The cruise line revealed that P&O Ionas‘ sister ship will be named Arvia which translates to “From The Seashore.”

The new ship will be a total of 184,700 gross tons and she will have an identical design to her sister ship. Arvia will be fully powered by Liquified Natural Gas (LNG), part of a new drive of environmentally friendly vessels from parent company the Carnival Corporation. There will be enhancements to already successful concepts across the fleet along with features already found on P&O Iona.

She will join the fleet in December 2022 and bookings will go on sale in March. The cruise line will be releasing further specific details on Arvia in the coming weeks and months.

The Miami-based cruise line has offered new options to guests booked through July 31, 2021, on cruises that are seven days or less. A letter was sent which was signed by Carnival Cruise Line President Christine Duffy on January 15, 2021, with the new cancellation options.

The cruise line mentions in the letter that the return of cruise operations in the U.S. is still not determined, and the cruise line is still waiting on further guidance from the U.S. Centers for Disease Control & Prevention (CDC). Guests can now choose what’s best for them moving forward.

So option one will allow guests to maintain their existing booking, including any payments that still need to be made. They will receive a $100 onboard credit if the voyage does still go ahead. If the cruise is eventually cancelled and guests have not yet received the enhanced value offer, they will receive what’s been offered during the suspension of operations to other guests.

For option two, guests can cancel their voyage any time from now to March 31, 2021, and receive a full refund. If the cruise was booked with a future cruise credit, that could be kept along with onboard credit as long as the next cruise is booked by September 30, 2021, for a sailing departing by April 30, 2023.

Carnival Cruise Line also released new options for those who are booked on sailings longer than seven days and we have all that covered over on cruisehive.com.

We are now starting to see a new round of cancellations and already one major cruise line has cancelled until the summer! Let’s take a look at the latest new suspensions announced from the week.

We start with Norwegian Cruise Line which has now cancelled all sailings through May 2021. Cruise ships won’t resume operations until June at the very earliest and for many ships, they will remain on hold for even longer.

This includes all three operators owned by Norwegian Cruise Line Holdings. It came as no surprise as days prior to the announcement, cruises for May had already been removed from the website.

Viking Cruises became the second cruise line in the last several days to extend its pause on operations. River and ocean operations will remain on hold through May 31, 2021, which means cruises won’t resume until June at the earliest.

The good news is that Viking vessels remain in a “warm layup” and ready to begin sailings with new health measures in place once government approvals are given. The update was released on February 17 along with a letter sent to any impacted guests and travel agents.

P&O Australia announced it will not be sailing any voyages until June 18, 2021, bringing cruises in Australia to the start of the Southern winter cruise season.

At the start of the year, the company had already decided to postpone all of its voyages to New Zealand and the hope is now that loyal guests will still re-book for a future cruise. Guests can look forward to two new arrivals to the fleet later in the year with Pacific Encounter out of Brisbane and Pacific Adventure out of Sydney.

As mentioned earlier Crystal Cruises extended its suspension on operations starting from May 2021 for river cruises and for even longer for ocean and yacht sailings.

And breaking news coming in as Disney Cruise Line has just removed all its remaining May 2021 sailings from its website. As of right now, nothing has yet been announced.

So those are just some of the major cruise headlines from the week, we’ve got even more over on cruisehive.com including another cruise line requiring crew members to be vaccinated, Carnival Cruise Line launches a Monopoly board game, NCL provides an update on Alaska sailings, Minister in the UK says people shouldn’t be booking travel and a lot more.

If you’ve been busy you can also catch up on last weeks cruise news update.