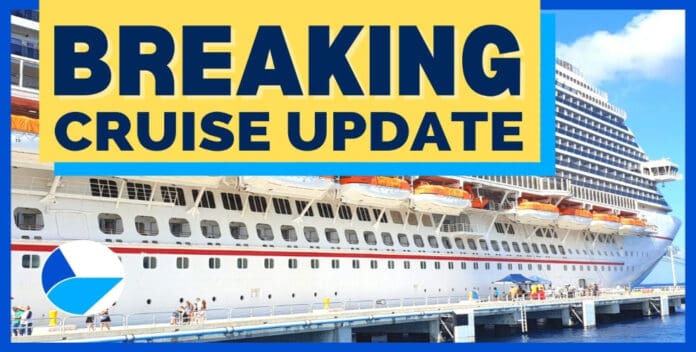 We’ve got breaking cruise news from Carnival Cruise Line and Royal Caribbean along with some big cruise industry stories from the week.

So just before we get started, within the last 24 hours we had some breaking news from Carnival Cruise Line and Royal Caribbean which we will update you on later in the video.

We’ve also got some big news stories from this week including crew members needing to be vaccinated before returning to the ships, a world-first feature revealed from MSC Cruises, more cancellations from Carnival, cruises to nowhere to continue for Quantum of the Seas, and more.

180-Day World Cruise Sells Out in a Single Day!

We get started with this impressive news of Oceania Cruises’ 180-day world cruise selling out in just one day! Who said there is no demand in cruising!

Bookings opened for the public on January 27, 2021, and even though these types of sailings usually attract loyal cruisers, in this case, more than one-third of all bookings came from first-timers and those first booking as an Oceania guest.

The line’s 2023 Around the World in 180 Days voyage is the most extensive and in-depth of any world cruise available. Calling on 96 ports in 33 countries across four continents.

The Insignia cruise ship will sail this dream offering departing San Francisco, California on January 15, 2023. The 684-passenger vessel will end the cruise back in San Francisco on July 13, 2023, and the voyage is costing guests over $41,000! Let us know what you think of this and if it’s worth the price in the comments.

Carnival Cruise Line has extended its suspension for just two ships that are based out of Australia. This won’t impact the operations out of the United States but will still have a huge impact on the industry down under.

Carnival Cruise Line has already stated that guests who are impacted by the further cancellations should expect an email very soon about their options. It’s just going to take even longer until resuming cruises safely can happen.

For now, cruise ships operating in Australian waters with a passenger capacity of over 100 are banned until March 17, 2021.

Quantum of the Seas to Remain in Singapore

Royal Caribbean has announced an extension of Quantum of the Seas‘ season of cruises to nowhere out of Singapore. The island nation is one of the few countries where cruising has been allowed to proceed successfully for the last few months.

Royal Caribbean’s decision was expected as Quantum of the Seas was initially scheduled to reposition to Alaska for the summer season. The cruise line has been exceedingly successful with short ocean cruises from Singapore, which are limited to Singapore residents only.

Royal Caribbean has been successfully sailing in Singapore since December 2020 and will continue to do so between March 22, and June 21, 2021.

Quantum of the Seas is one of the few cruise ships sailing worldwide and is certainly proving that guests can indeed do cruising safely. The line has introduced some groundbreaking measures to provide guests with peace of mind while sailing.

So Rob will be working very hard at the very futuristic venue MSC Starship Club aboard the MSC Virtusoa which was recently delivered to the cruise line on February 1, 2021. The club will have 3D holograms, an immersive digital art wall and a 12-seat infinity digital interactive table, giving guests the opportunity to explore space with their own personalized galactic tour.

There will be specific vertical digital cockpits where guests can make their orders. Rob will then get to work using all his skills to make the perfect cocktail. He’ll be able to cater to many guests thanks to him being able to speak eight languages.

Rob will be able to showcase his dance moves along with telling people jokes, riddles and space trivia, offering a witty bar experience just like with a real bartender.

The MSC Starship Club has been a concept that’s been in the making for almost six years. The cruise line has been pushing the boundaries and innovations to make it a reality. MSC Virtuosa will begin sailing this April in the Mediterranean.

Royal Caribbean has confirmed that crew members will need to be vaccinated before going back to work on the cruise ship. In a letter recently sent to the crew members, the company speaks about the new opportunities the vaccine offers for them to go back to work, as well as offer protection to their family and the guests onboard.

There is as yet very little known how the cruise company will be administering the thousands of crew members with the vaccine. The process will likely be different depending on where each crew member lives, when they are supposed to be boarding, and most importantly, when ships will be allowed to sail.

Royal Caribbean has said it will continue to update its crew members with the necessary information and has asked for patience to go through the details.

No updates yet on guests needing to be vaccinated. A lot of it depends on the CDC and the requirements needed for the Conditional Sailing Order.

Staying with Royal Caribbean, it has just come out that the cruise line will not be canceling any of its Canada sailings including departures from the country, port visits, and cruises to Alaska.

The cruise line says it is working through potential options with the Government of Canada and the USA and the Cruise Lines International Association (CLIA). For now, the cruise line is asking guests to keep their bookings until an alternative solution is completed. Canada announced recently that cruise ships are banned from its waters for one year.

And we end with a huge development from Carnival Cruise Line. New options have been detailed for those who have a booking on a cruise which is 8-days or longer. A letter has been sent out which details two options.

Option 1 lets guests maintain their exiting booking while the cruise line continues to explore options on the longer sailings. Guests will automatically receive a $100 onboard credit should the voyage still go ahead.

If that cruise is eventually cancelled and guests have not yet received the enhanced value offer, they can instead take advantage of what other guests can receive on other sailings during the suspension of operations.

For option 2, guests may choose to cancel their booking any time by March 31, 2021, and receive a full refund. The future cruise credit and onboard credit, if any, can be retained as long as the next cruise is booked by September 30, 2021, for a cruise that departs by April 30, 2023.

This provides peace of mind for those who were worried about the longer sailings. In November 2020 Carnival announced that cruises over seven days through October 31, 2021, were to be temporarily removed as a precaution and while dealing with resolving the details with the CDC.

All the details on the options and our full report on this new development which came out last night can be found on the website.

Those were just some of the major news headlines from the week. We’ve got even more including a COVID outbreak swiftly dealt with by TUI Cruises, Virgin Voyages giving away 2,021 cruises, new venues revealed for Carnival’s new Mardi Gras, an update on one of Cozumel’s most popular beach clubs, Carnival’s chief communications officer responds to frustrated guests and a lot more.

You can also take a look at last week’s news round right here.