A significant cruise news update with the latest developments on resuming cruises and new technical instructions from the CDC. 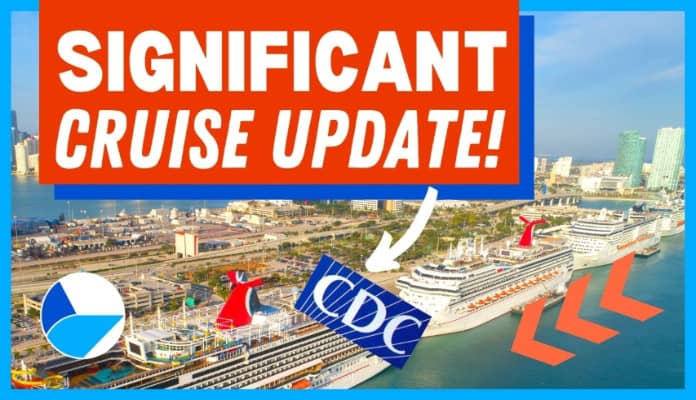 We’ve got a significant cruise news update with all the latest headlines from the week including those much anticipated technical guidelines for resuming cruises.

What week of cruise news it has been. We’ve had all kinds of new developments but of course the most significant is that the CDC has finally released technical instructions for cruise lines to resume operations, and we’ll get into all that very soon. We’ve also got news from Royal Caribbean taking delivery of the shiny new Odyssey of the Seas and new UK summer sailings. Also updates from Norwegian Cruise Line Carnival-owned cruise lines, MSC Cruises and Celebrity Cruises.

Anthem of the Seas will be sailing, like many others, from the Port of Southampton from July 7, 2021. Given the massive efforts by the emergency services, NHS, social care sector, and armed forces over the last 12 months, the line is offering 999 free rooms to UK residents in these professions.

Royal Caribbean will be offering guests two options for a cruise around the British Isles this summer. Anthem of the Seas will be sailing on a 4-night ocean getaway on July 7, while July 15 will see the launch of 5-8-night cruises with several port calls in destinations such as Liverpool, Kirkwall in the Orkney Islands, Scotland, and Belfast, Northern Ireland.

These itineraries will be open for vaccinated guests only and on sale from April 7. Guests under the age of 18 will not need to be vaccinated but should show a negative test result. Pre-registration for guests eligible for one of the 999 free staterooms will open on April 13.

Odyssey of the Seas Delivered

The day finally arrived for Royal Caribbean as Odyssey of the Seas has been delivered from Meyer Werft. She is the 25th ship in the fleet and comes after delays due to the global pandemic. The festivities took place virtually in a live broadcast on Facebook that included performances and speeches from the cruise line and shipyard executives.

There is much anticipation for the new Royal Caribbean cruise ship as she will be the first to offer sailings out of Israel starting in May 2021. She will sail out of Haifa and offer a combination of 3- to 7-night itineraries through October.

On Friday evening, the U.S. Centers for Disease Control & Prevention (CDC) surprisingly released the technical instructions as part of the second phase of the Conditional Sailing Order. And to be honest, it looks even more complicated for the cruise lines and ports.

So here is the brief list of what the new instructions cover:

This comes after growing calls for the CDC to actually end its Conditional Sailing Order, however, the CDC has remained firm and from what we’ve see in the newly released guidelines, hope of cruises returning by June look doubtful.

There are no plans until the next phase to allow test sailings and no clear timeline on resuming operations out of U.S. ports. The focus was very much on crew vaccination and the need for cruise lines to work with ports on a number of health measures.

Also Read: No Test Sailings Yet and No Clear Dates from CDC

Norwegian Cruise Line Holdings has confirmed to crew members that they will need to be vaccinated to work aboard the vessels. This impacts all cruise lines owned by the company, including Norwegian Cruise Line, Regent Seven Seas, and Oceania Cruises.

This comes as many cruise lines are pushing forward with plans to resume cruises safely. This could also be a hint of NCL introducing new vaccinated-only sailings in alternative markets. A redeployment announcement is already expected very soon.

Apparently, a recent crew survey revealed that many crew members are already planning on being vaccinated in their home countries to prepare for a possible resumption of cruises in the summer. So, as a result of the survey and expert guidance, all crew members and officers will have to be fully vaccinated before returning to any ship.

NCLH advises that crew do get vaccinated by an approved brand as soon as possible. Those who can’t get vaccinated will need to wait until these vaccinations can occur onboard.

The iconic British cruise line Cunard Line had an impressive day of bookings on March 31, 2021, when it released its UK domestic sailings this summer. Cunard had its biggest day in a decade due to the huge demand for summer UK domestic cruises.

Queen Elizabeth will be sailing cruises between July and October 2021 around the UK coastline out of Southampton. And according to Cunard’s president, on the recent Centenary World Voyages, all but one suite is sold out, an indication that cruisers are ready to hit the seas once again.

There will be a total of ten British Isles Voyages and three Sun Voyages lasting between three and twelve nights. Queen Elizabeth is the newest ship in the fleet at 90,900 gross tons and a guest capacity of over 2,000. The ship will sail for fully vaccinated guests only due to the successful rollout across the country.

Another Homeport for Celebrity Cruises

Celebrity Cruises has announced another homeport for the summer season. The cruise line will be re-deploying Celebrity Silhouette to the British Isles to join a host of other vessels sailing under the UK’s reopening of the domestic cruise industry.

The cruises onboard Celebrity Silhouette will be going on sale from April 6 onwards. Setting sail from Southampton this July 3, the ship will embark on a series of 6-8 night itineraries around Britain’s coastline.

The vessel seems to be sailing more on the UK’s northern shores as the itinerary sails from Southampton in Southern England, with ports of call in Belfast, Northern Ireland, Liverpool, England, Glasgow, Kirkwall, and Inverness in Scotland, and a stop at the scenic Isle of Portland in Dorset is also included. The vessel will be doing a number of scenic sailings as well.

MSC Virtuosa to Sail from the UK

The MSC Virtuosa will debut with UK domestic sailings from this summer. Her maiden voyage will depart on May 20, 2021, out of Southampton, England.

The voyage will be the first of a series of 3 and 4-night mini cruises before she begins 7-night cruises from June 12. The new MSC cruise ship will sail from England and Scotland for the week-long offerings.

As expected, these new cruises from MSC will be for UK residents only. The cruises are open for all guests, including those who have not been vaccinated. However, those who are not vaccinated will need to show proof of a negative test that has been conducted up to 72 hours before embarkation.

We’ve also got even more news from a very busy week in the industry including the Carnival Cruise Line President taking a tour of the new terminal 3 at Port Canaveral, the U.S. Travel Association joining calls to lift the Conditional Sailing Order, P&O Australia extends its suspension down under, confusion over cruise ships returning to the U.S. Virgin Islands, calls for caution ahead of the UK restart of operations and a lot more.

You can catch-up on last weeks cruise news update too.