A cruise news update as the cruise industry vs. the CDC continues and sailings set to return across Europe. 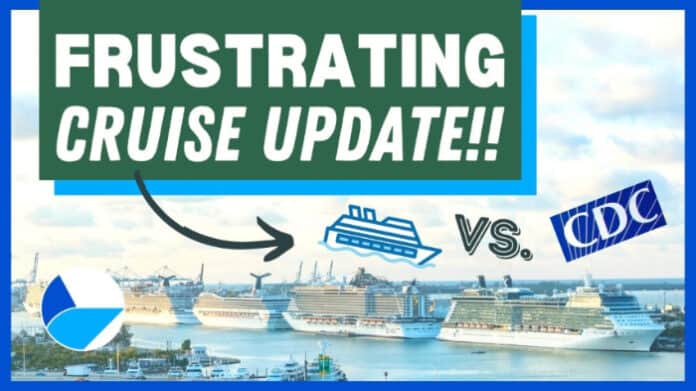 Frustrating pretty much sums up a busy week of cruise news as the cruise industry in the U.S. remains on hold and pressure mounts on the CDC.

Welcome everyone to some of the biggest cruise stories from the week. Even though it does seem it’s all about the cruise industry vs. the CDC, there have also been some other major stories.

So we’ve got all the latest on cruises trying to kickstart operations in the U.S., including a new CRUISE Act from senators, two politicians against cruise travel, and Norwegian Cruise Line sending a reminder to the CDC.

We’ve also got updates with new Disney dates on UK staycations, new cruises coming this summer from MSC Cruises, and the UK industry making a comeback!

We start with the Careful Resumption Under Improved Safety Enhancements Act which is named the “CRUISE Act” for short. The act has been introduced by Senators Rick Scott, Dan Sullivan, and Marco Rubio with the aim to overrule the CDC’s framework for the Conditional Sailing Order that has been in place since the end of October 2020.

The new act aims to disregard the order from the CDC and to let cruises resume safely no later than July 4, 2021. Highlights include:

Congresswoman María Elvira Salazar is leading this legislation in the House of Representatives to get the bill passed. The hope is that cruises will resume operations with their own strict health measures in place. In fact, cruise lines have already proved that cruising can operate safely in other parts of the world.

And while we’re on the topic of the CDC, Norwegian Cruise Line has still not received a response from the U.S. Centers for Disease Control & Prevention after a letter was sent on April 5, 2021. The CDC has not replied to the cruise company, and now another letter has been sent requesting a response.

Cruise lines really want to resume operations, and Norwegian Cruise Line has been very vocal recently urging the CDC to lift its Conditional Sailing Order (CSO) by July 4, 2021. The original letter sent detailed the company’s plan to resume sailings from the U.S safely.

It’s clear that the president and CEO, Frank Del Rio really wants a response and he believes that the Conditional Sailing Order is outdated and ignores the advancement of vaccines across the U.S.

The cruise company, which operates Norwegian Cruise Line, Regent Seven Seas, and Oceania Cruises, does require all guests and crew to be vaccinated for the initial voyages from the U.S. Along with strict health protocols developed by health experts, including testing. The cruise line says this exceeds the CDC’s CSO’s intent.

In a letter to the CDC Director, Dr. Rochelle Walensky, two politicians have urged to strictly enforce the Conditional Sailing Order (CSO) if any new outbreaks occur on cruise ships.

This comes after growing calls for the CSO to be lifted by July 4 from state officials, cruise lines, and ports. Cruise lines have even proved their case that cruises can resume safely. However, there is another side of this, with some calling for a strict enforcement on cruises before they have even resumed.

So Congresswoman Doris Matsui of Sacramento and U.S. Senator Richard Blumenthal for Connecticut have sent a letter to the CDC director. The full letter is over on cruisehive.com but basically, they are asking to enforce the CSO and not allow cruises to resume earlier which is against all the recent calls to lift the Conditional Sailing order.

The pair have used outdated advice to prove their point and don’t take into fact any of the new advancements cruise lines have made since the pandemic first started over a year ago.

Even though MSC Cruises has already announced a further suspension on U.S. operations through June 30, 2021, the cruise line has been very busy planning its return across Europe for the summer.

This is just the beginning as MSC has said that the newly announced itineraries across Europe could be expanded as more countries open. There will be a total of 10 ships sailing the continent including the Eastern and Western Mediterranean, and Nothern Europe.

For the Western Mediterranean, MSC Grandiosa will initially extend her current 7-night itinerary by calling at Italian ports. MSC Seaside will begin sailing from Genoa on May 1, calling at newly introduced Italian ports.

The MSC Seashore, MSC Cruises’ newest flagship, will join the cruise line’s fleet at the end of July. Between August 1 and October 31, the vessel will offer 7-night cruises calling at the Italian ports of Genoa, Naples, and Messina, as well as Valletta in Malta, Barcelona in Spain, and Marseille in France.

MSC plans to operate four vessels in Northern Europe. The first will be MSC Virtuosa which will sail on a UK itinerary, available for UK guests only starting from May 20, 2021. MSC plans to sail as well from Germany; however, the port opening situation is unclear so sailings will not begin until June 15.

MSC Seaview will homeport in Kiel, Germany, starting on June 19, replacing MSC Virtuosa. Additionally, MSC Preziosa is planned to depart on June 21 from Hamburg, Germany, and MSC Musica on June 20 in Germany, if the German ports are open.

Disney Cruise Line first revealed that it was planning UK staycation cruises and that bookings would open in April. Those new itineraries out of Southampton, Newcastle, Liverpool, and Tilbury were detailed in the second week of April, However, some of the departure dates have changed including when guests can start booking.

The new date for when anyone can book one of the UK staycations will be April 30, it was previously April 19 but now it has been pushed back. For Platinum and Gold members, bookings open on April 28. For Silver members, the bookings open up on April 29. The advanced dates can only be booked via a special phone number.

So here are the new dates out of the four UK homeports:

UK Cruising is Making a Comeback!

While the cruise industry in the United States seems to be getting nowhere, the UK’s situation is looking much more positive. Domestic cruises will be allowed from May 17, and now a new traffic light system has been introduced that will soon allow international cruises from the UK.

A new 20-page report by the UK’s Global Travel Taskforce sets out a new framework for reopening international travel, including cruises no earlier than May 17.

This will be done using a new traffic light system. As mentioned in the report, the government is committed to making a comeback using analytic data and a risk-based approach.

Once UK domestic cruises open, the task force will follow closely as it could impact when international cruising opens back up. Travelers will also no longer need to fill out a permission form for international travel.

The government will implement a new traffic light system to identify if a destination is safe to visit or not. This applies to all travel industries, including cruises. The system aims to protect the public and any new variants of the virus.

By early May, the government will release which countries are red, amber, or green in preparation for allowing international travel sometime from May 17.

So those were just a handful of the major stories from the week, there’s even more including Royal Caribbean providing an update on helping the island of St. Vincent, the cruise industry meets with the White House to discuss resuming operations, residents in Alaska are looking at putting a limit on cruise ships, Florida-based cruise line aims for July 2 restart to the Bahamas, CDC still recommends to avoid all cruise travel, and Alaska could join Florida to sue the CDC to get cruises moving again.