All the latest cruise news from the week as we continue to follow the cruise industry vs. the CDC to allow cruises to restart along with even more U.S. suspensions. 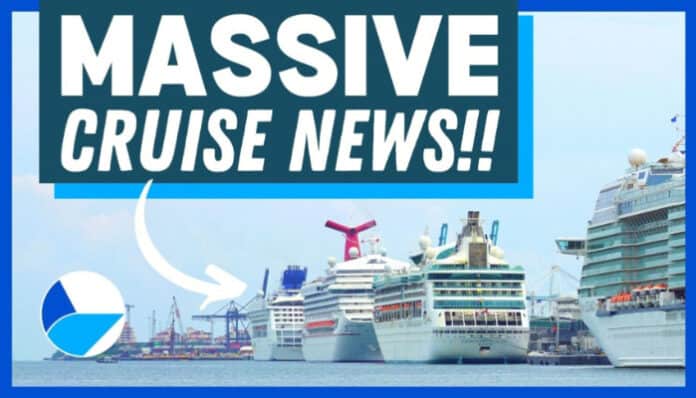 Here we go with another full week of cruise news updates covering all the major cruise lines and even that massive news coming from Florida.

There have been several new developments from the week as the State of Florida fights for cruises to reopen and the cruise industry continues its calls for the CDC to lift the Conditional Sailing Order.

In addition to all that drama, there have been so many cruise news updates with extended suspensions from Carnival Cruise line, Royal Caribbean, Virgin Voyages, and Disney Cruise Line along with a continued shift to homeports outside the U.S.

With the U.S. Centers for Disease Control & Prevention (CDC) still not lifting the Conditional Sailing Order, The State of Florida and Gov. Ron DeSantis have moved forward and filed a lawsuit against the Federal Government and the CDC to allow cruises immediately.

The announcement was made at PortMiami and the Governor specifically talked about the impact the shutdown is having in Florida. He said it didn’t make sense not to allow cruises to restart especially as people will be traveling to alternative homeports outside the U.S. such as the Bahamas anyway.

DeSantis believes the Federal Government does not have the right to mothball a major industry for over a year. He thinks there is a good chance for success. The possibility of this happening has been in discussion for many weeks, and DeSantis is partnering with Florida Attorney General Ashley Moody to make it happen.

And we now head into all the suspensions starting with Royal Caribbean. The company has extended its hold on U.S. operations through June 30, 2021, and this impacts Royal Caribbean International, Celebrity Cruises, and Silversea Cruises.

Cruises are not set to resume until July at the very earliest. However, the further suspension does not impact operations out of other countries including the newly announced homeports that Royal Caribbean plans on sailing from this summer.

Carnival Cruise Line has also extended its suspension in the U.S. It comes as the Conditional Sailing Order by the CDC remains in place despite many calls for it to be lifted. So the further suspension is now through June 30, 2021, and it does also impact Mardi Gras’ debut which was scheduled for June 5 but now she is delayed for a sixth time until July 3, 2021.

For now, Carnival remains “America’s cruise line” but patience is running out with the CDC. Carnival Cruise Line President Christine Duffy has said that they may be forced to start shifting ships to alternative ports outside the United States.

Keep checking with all the latest and we’ll make sure you’re first to know on what the cruise line decides what to do.

It has been a busy week of news for Virgin Voyages as the cruise line announced cancellations into September 2021 and then not long after, announced new UK domestic sailings for the summer.

So all regular cruises on Scarlet Lady are now canceled from July 4 to September 17, 2021. Virgin had already suspended operations through June so cruises from the U.S. are just going to have to wait much longer.

However, all is not lost as Virgin has joined the now huge list of cruise lines that are planning on taking advantage of UK domestic sailings this summer. The new offerings will be for vaccinated guests only and go on sale on April 13, 2021. There will be a series of 3-4-night sailings out of Portsmouth in south England departing on August, 6, 9, 13, 16, 20, and 23.

Summer cruises out of the United States are pulling away as Disney has canceled all of its June 2021 departures. The further suspension on operations impacts the Disney Dream, Disney Fantasy, and Disney Wonder sailings. These vessels will not resume cruises until July at the very earliest.

The cruise line’s previous extended suspension was announced in late February for sailings through June. Disney Magic cruises were canceled until August, which’s now been updated through September 18, 2021.

Despite Disney canceling cruises from the U.S., those in the UK will still be able to enjoy a vacation at sea onboard the Disney Magic. The ship will sail UK domestic sailings for the summer, set to go on sale this month.

It has been building up for over a week since we first reported about cancelations and deployment changes for five NCL cruise ships. Well, we now know that the cruise line is shifting ships to alternative homeports for the summer in the Caribbean and Europe.

The cruise line will require all guests to be fully vaccinated and tested prior to boarding any of the vessels. To go along with its return to service, Norwegian Cruise Line has also launched a new docuseries named Embark and it premieres on April 15 at 8:00 PM on Facebook.

This news comes as NCL has also sent a letter to the CDC urging for the Conditional Sailing Order to be lifted by July 2021.

So those were the biggest news stories from the week, but do know that things are developing fast as cruise lines push for a restart in the United States. There are even more headlines that you should catch up on including cruise lines working together to help evacuate residents from St. Vincent, Disney’s new LNG cruise ship reaches a major construction milestone, new cruises announced for the next P&O LNG ship, a business update from Carnival Corp and more.