10 Ways to Enjoy Royal Caribbean’s Quantum of the Seas

Check these things to do and enjoy on Royal Caribbean's Quantum of the Seas with cruise ship stats, facts, and dry dock details.

Royal Caribbean’s Quantum of the Seas is, as you might guess from the name, a Quantum-class cruise ship. The lead ship of the class, when launched in 2014, the Royal Caribbean cruise ship was the third-largest cruise ship in the world by gross tonnage.

Originally announced in 2011, Quantum of the Seas was floated out in August 2014 and delivered to Royal Caribbean in October, for a November christening off the New Jersey coast.

Originally, Quantum of the Seas spent its time cruising to the Caribbean and Bahamas from New Jersey, before it was redeployed and shipped off to Asia. There, it began serving the Asian market, doing so for several years. In the coming years, however, Royal Caribbean said, in an announcement released in March 2020, the ship will serve the Western United States with Alaskan cruises.

Though the ship is relatively young, it did receive updates in 2019, though these updates were relatively minor. Any English-speaking cruisers aboard Quantum of the Seas (at least until the ship is redeployed to Alaska, after which we’ll have to wait to see if Royal Caribbean changes things up) will find the ship’s dining and entertainment options very much so catered to the Asian market that the ship has served for the past several years. Still, this is nothing new for cruisers who have previously sailed on just about any international cruise line’s Asian itineraries.

Also Read: 14 Things to Know About Royal Caribbean’s Spectrum of the Seas

Are you thinking of booking a cruise on the Royal Caribbean Quantum of the Seas cruise ship before it embarks on its new itineraries, or even after that? Then you’ll want to enjoy this ship to its full potential.

While it’s not the largest in the world, it’s still pretty massive, meaning there’s plenty to do, see and experience for any type of traveler, whether you’re traveling as a couple on a romantic honeymoon, as a multigenerational family or as a group of friends.

Check out our 10 ways to enjoy Royal Caribbean’s Quantum of the Seas, for a full rundown of what to do.

1. Pay a visit to the Guinness Record-holding North Star

If you enjoy any of the entertainment options aboard the Royal Caribbean Quantum of the Seas cruise ship, it has to be this. The North Star experience received its Guinness Book of World Records recognition in 2016, as the highest viewing deck on a cruise ship. So, what exactly is it?

The North Star is a glass observation capsule offering 360-degree views, and it rotates up and over the ship sides, for views you won’t experience anywhere else.

If you’re on an Asian or Australian cruise on Quantum of the Seas, some of the notable sites you’ll be able to glimpse from the North Star include the Hong Kong skyline, Sydney Opera House and Sydney Harbour.

2. Try to dine at all of the many free dining options

While some cruise lines out there only allow you to eat at two or three restaurants for free, with the dining cost included in your overall cruise fare, that’s not the case about the Royal Caribbean Quantum of the Seas cruise ship. The majority of the restaurants aboard the ship are either free or partially free.

As alluded, Asian food is plentiful and you’ll find a huge array of Asian cuisine on the buffet at Windjammer Marketplace. If you love Asian cuisine of all types, then you’re going to be in heaven aboard this ship. Plus, the food quality in these free restaurants is pretty top-tier. (But, if you don’t like Asian fare, you can still find plenty of Western cuisine at Sorrento’s and the Cafe Promenade.)

3. Pick one or two of the for-a-fee restaurants to try during your cruise as well

Of course, while the complimentary dining is delicious, it’s worth it to upgrade for at least a meal or two during your cruise, to try the for-a-fee restaurants. These include La Patisserie, Jamie’s Italian, Izumi, Chops Grill, Chef’s Table, Da Dong Wonderland and Harp & Horn.

At the latter, expect Chinese bar food, which you won’t find on other Quantum-class cruise ships dedicated to Western cruisers — a real treat if you’re looking to try something new. And, at Da Dong Wonderland, indulge in a nine-course luxury meal, with a menu inspired by a Michelin-star Chinese chef. Of course, favorite restaurant Jamie’s Italian is as good as ever, and pretty much exactly like what you’ll find on other Royal Caribbean Quantum-class ships.

4. Attend a show at the Royal Theater

While on most cruises, you can expect to see a Broadway-style musical show, that’s not the case on the Royal Caribbean Quantum of the Seas cruise ship. The ship recently swapped out its Mamma Mia! show for a Las Vegas-style cabaret of sorts.

If you’re not into music and dance, you might like the theater’s comedy show, Funny Bones. Another music show is Sonic Odyssey, a fan favorite that blends music and art for an amazing, larger-than-life, awe-inspiring experience.

5. Get in some family-style fun at one of the many activity stations across the ship (like the can’t-miss SeaPlex!)

Don’t even start to think that sea days are boring. That’s not at all the case here. Quantum of the Seas offers up a range of daily activities (including some English-spoken activities if there are enough English speakers aboard the cruise).

Of course, the SeaPlex is a worthy stop on any Quantum-class ship. The SeaPlex is an indoor sporting venue that offers tons of different activities to get your blood pumping.

There’s something suitable for all ages, making this a great pick for families wanting to get in some quality time. Roller skate, scoot around in a bumper car, kick around a soccer ball or challenge your friends to a game of basketball. E-gaming is also an option, with Xbox gaming consoles on the outskirts of the room.

Sign up for the ship’s circus school event for even more family fun, and learn some entertaining skills such as the art of the trapeze or juggling or even clowning.

6. Play a game or two in the casino

Even if you’re not a frequent gambler, stopping by the casino while aboard the Royal Caribbean Quantum of the Seas cruise ship can be a fun nighttime activity for the adults in your party. Risk a few dollars at the roulette wheel or at the slots. The gaudily decorated casino is a real amusement.

The casino is also one of the only places aboard the ship where smoking is permitted, but if you don’t smoke, you can head to the casino’s non-smoking section.

Two70 stretches across the ship’s fifth, sixth and seventh decks, at the rear of the vessel. Two70 is a completely unique entertainment venue that you need to see for yourself, as it’s something you really won’t find on just about any other cruise line.

The space is made up of huge windows, a bar, stage and seating. It’s pretty tame in the daylight, but when night falls, it lights up with spectacular shows. The windows turns into a larger-than-life screen that shows off interesting animations. The screen is complemented by several other robotic screens that follow choreographed movements.

When the space isn’t just showing off all its technological marvels, it offers the twice-nightly show Starwater, which blends acrobatics, music and technology for a truly unique experience.

8. Hop your way through the many bars and lounges

Try to hit as many of the bars and lounges aboard Quantum of the Seas as you can. There are plenty to choose from and you’ll find that most are rarely crowded.

Bionic Bar is an absolute must-visit, thanks to its robotic bartenders that mix up your drinks using smart tech. Vintages Wine Bar is, obviously, for wine and is located near Jamie’s Italian, so you can get your wine and Tuscan food fix all at once. There are several pool bars and, as mentioned, the North Star bar.

9. Soak up the sun at one of the infrequently crowded pools

On some cruise ships, you can barely get into the pool, there are so many people! And don’t even mention finding a deck chair. That’s hardly the case when you’re aboard the Royal Caribbean Quantum of the Seas cruise ship.

There are three main pools on Deck 14 and all are often sparsely crowded, if crowded at all. You can easily find a deck chair just about any time of day. So, take your pick from the outdoor main pool, the pool underneath the retractable roof or the pool that sits in the suite guest-only Solarium. You’ll even find the four hot tubs on the deck often go unnoticed.

A separate H20 Zone is good for families with small children, as it has its own, tame wave pool and a splash pool. If you’ve visited the Solarium space on other Royal Caribbean ships, you may be saddened to find out that, on Quantum of the Seas, the Solarium is for suite-guests only.

10. Try one of the unique, adventure activities on Deck 16

Lastly, if you love adventure and any kind of physical challenge, you’ll want to try two very special activities on Deck 16: the iFly by RipCord skydiving simulator and the FlowRider surf simulator. They’re both amazing ways to try something new and see if you might want to try the real things sometime in the future.

Not up for thrills of that nature? The climbing rock wall is nearby and offers adventure of a tamer type.

Worth Reading: 16 Impressive Things About Royal Caribbean’s Ovation of the Seas

Quantum of the Seas FAQ:

How many swimming pools are on Quantum of the Seas?

There are three main pools on Deck 14: the outdoor main pool, the pool underneath the retractable roof and the pool that sits in the suite guest-only Solarium. Four hot tubs are also available, as is an H20 Zone for families with small children.

What class cruise ship is Quantum of the Seas?

How large is the Quantum of the Seas cruise ship? 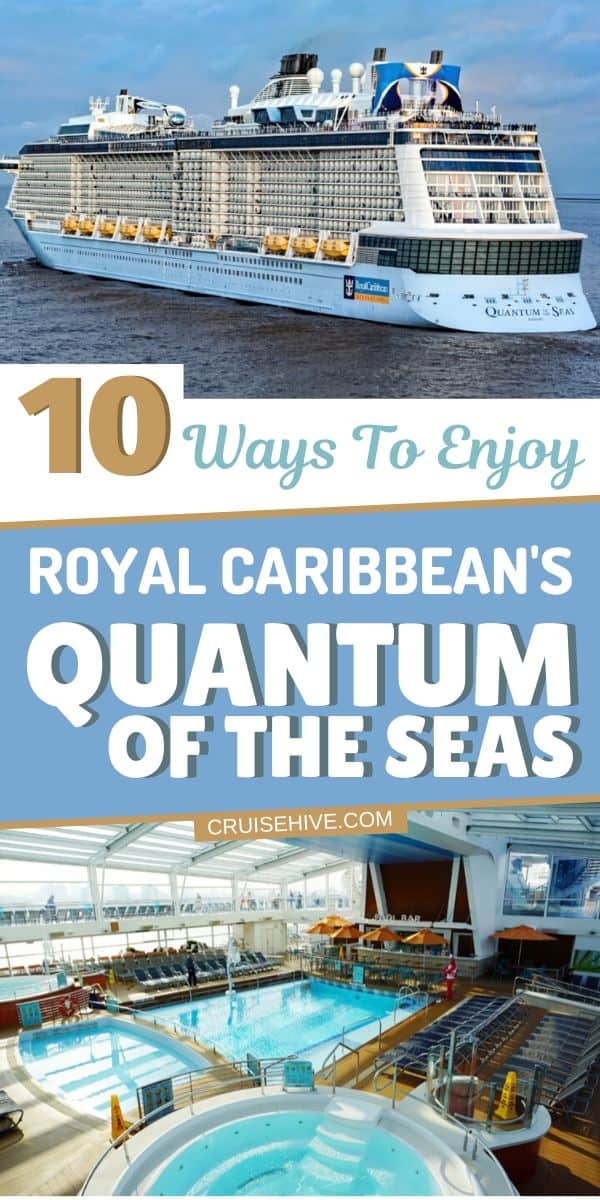