How the CDC’s New Air Travel Requirements Could Impact Cruising

Viking Cruises which is also known as Viking River Cruises and mainly known for river vessels has christened the first of three new cruise ships.

The Viking Star which is a luxury cruise ship was christened in Bergen, Norway on Sunday, May 17th which included a lavish celebration. It was the perfect day for a christening that was also held on Norway’s National Constitution Day. There were events throughout the day including an appearance from the Viking Stars godmother and mayor of Bergen, Trude Drevland.

In addition to the public fanfare, Viking Star‘s arrival in Bergen is noteworthy because it marks the first time in 10 years that a Norwegian-flagged passenger cruise ship has chosen Norway’s second-largest city as its homeport.

“We believe the arrival of Viking Star signals a new era in destination-focused cruising, and I could not be more proud that she will call my favorite city in the world ‘home,'” said Torstein Hagen, Chairman of Viking Cruises. “This is a ship that was built for exploration and designed with our Scandinavian heritage in mind, and our guests will experience it from the moment they step onboard.”

As the evening set the cruise line CEO Torstein Hagen along with the ships godmother made a speech which was followed by the champagne smashing against the Viking Stars hull. The traditional christening was then followed by a music festival which included performances from Charlie Siem, popular rock singer Sondre Lerche, Ylvis and Sissel. There was a fireworks display on the waterfront that was watched by thousands.

Long ago the Vikings ruled the northern oceans and now once again they are making a comeback with the first of three new cruise ships for the cruise line. Viking Star was built at the Fincantieri shipyard in Marghera, Italy and it set off on its maiden voyage on April 15th. The new vessel is 47,800 gross tons and can carry 930 passengers in 465 staterooms.

Another two sister ships are to be delivered, the delayed Viking Sky in Spring 2017 and the Viking Sea in 2016. The vessels are expected to feature similar features like the Spa Snow Room and the infinity Pool. 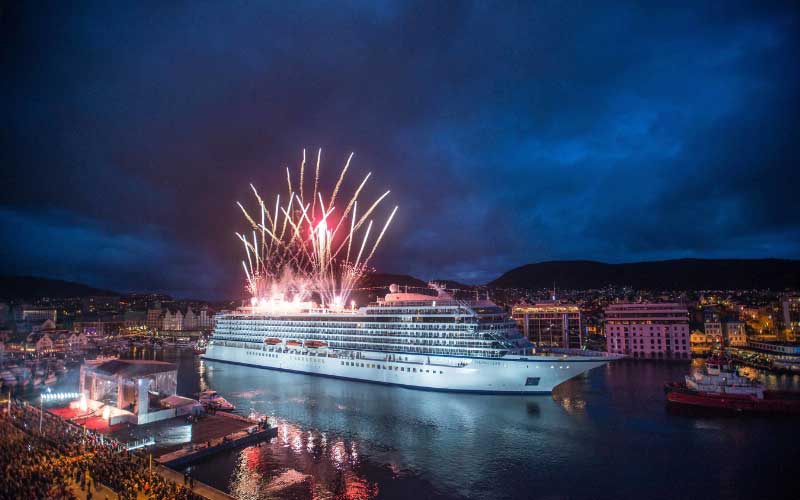