Viking celebrates its 25th birthday and naming ceremony of its two expedition ships in Amsterdam with a historical gathering of cruise ships. 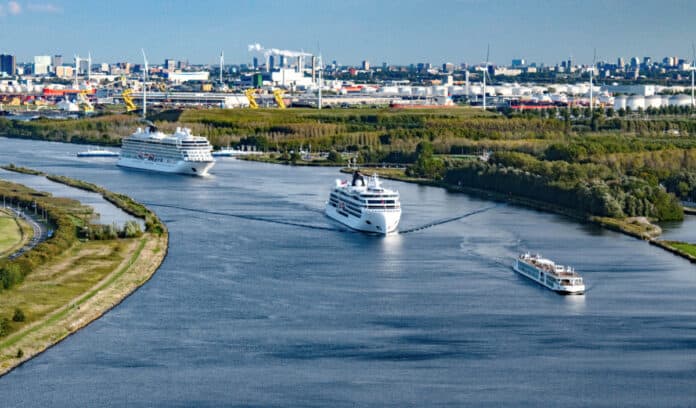 Viking celebrated its 25th birthday yesterday, September 30, with a historic gathering of three different types of cruise ships. An ocean ship, the company’s newest expedition ship, and a Viking river longship met in Amsterdam to sail in convoy to Ijmuiden, the Netherlands.

It was the first time that the three cruise ship classes met, which made for a spectacular sight as the three sailed down the North Sea Canal. The celebrations coincided with the naming of the cruise line’s two expedition vessels, Viking Octantis and Viking Polaris.

Founded in 1997, Viking, formerly Viking Cruises, has quickly developed itself into a global player in the cruise industry. Operational in three different types of cruises, ocean, river, and expedition, the company has seen rapid growth in the 25 years it has been operational.

Viking’s 25th-anniversary celebration in Amsterdam is the most recent event during a year in which the company has also welcomed to its fleet eight new Viking Longships, new purpose-built vessels on the Mekong, Nile, and Mississippi rivers, and two new expedition ships. By the end of 2022, two new, identical ocean ships will have also joined Viking’s fleet.

To mark the occasion of its 25th birthday, the company organized a historic gathering of all three ship classes. The newest ocean vessel, Viking Mars, a 47,842 gross tons cruise ship, Viking Mani, a 2015-built Viking longship river cruise vessel, and Viking Polaris, the second and newest expedition vessel, all met in Amsterdam.

It was the perfect occasion to also celebrate the naming ceremony for Viking Octantis and Viking Polaris, which was handed over by the shipyard just three days ago. Viking Octantis is currently sailing in the Great Lakes, so the naming was done through a remote ceremony.

“Today is historic for Viking—to celebrate our 25th anniversary, to have all classes of our ships sailing together for the first time, and to name our phenomenal new expedition vessels,” said Torstein Hagen, Chairman of Viking. “I am very proud of what we have accomplished in our first 25 years. And in our view, we are just getting started. Where do we go next? Onwards.”

The new Polar Class Viking Octantis and Viking Polaris are purpose-built for expeditions, at an ideal size for safety and comfort in remote destinations such as Antarctica. As the ships will be spending a significant amount of time in far-away destinations, the choice was made to select two veteran explorers as Godmother.

“It is an honor to be the godmother of the new Viking Octantis. I have spent significant time in Antarctica and recently had the privilege to return on one of the ship’s first voyages. The region is a special destination for scientists and adventurers, and sailing with Viking is the perfect way to get there,” said Liv Arnesen.

In keeping with the naming tradition, Arnesen and Bancroft assisted in breaking a bottle of Norwegian aquavit on each of the ship’s hulls.

“Growing up in the Minnesota region, the Great Lakes are where I spent my early years becoming an explorer. I am proud to be the godmother of an expedition vessel like the Viking Polaris that will allow guests to visit, not only the Great Lakes but also Antarctica, two regions that played a pivotal role in my life,” according to Ann Bancroft.

Following the ceremony, Viking Mars, Viking Mani, and Viking Polaris sailed in convoy through the North Sea Canal from the Dutch capital city of Amsterdam to the port of Ijmuiden. From Amsterdam, Viking Mars will continue her cruise around Western Europe,

Viking Polaris is currently making her way to Rio De Janeiro, Brazil, from where guests will embark on the first of a series of cruises to Antarctica. Viking Mani will remain in Europe, sailing from Amsterdam to Basel, Switzerland, and back.