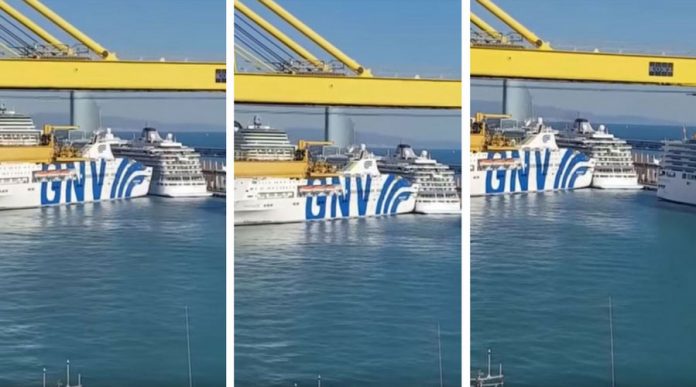 A ferry in Barcelona has hit a docked Viking cruise ship after apparently drifting backward.

A large ferry named “GNV Fantastic” hit the Viking Star cruise ship while docked at the Port of Barcelona in Spain on Friday afternoon at around 2 PM. Thankfully No injuries have been reported and after looking at the footage this could have been a lot worse. the port has also stated that damage is likely small.

Port of Barcelona stated the following regarding the accident:

Today, around 14 hours, occurred in the Port of Barcelona, opposite the terminal B, a slight collision between ferry GNV Fantastic and the Viking Star cruise ship. There was no injuries and material damage which, apparently, are being evaluated.

The ferry which is on the large size and operated by Grandi Navi Veloci based in Morocco had a technical issue. The ship apparently lost power which caused it to drift backward. In its path and docked just across the way at Terminal B was Viking Star, the first ocean cruise ship for Viking Cruises which began service in 2015. The Fantastic ferry drifts back and collides with the luxury cruise ship. Both vessels impact at the aft but for Viking Star there are balconies.

Footage of the accident has started doing the rounds on social media:

As soon as the accident occurred the local Coastguard was mobilized. An evaluation of any damage has also been activated.

Viking Star was docked in Barcelona as part of a Meditteranean cruise and the ship actually arrived at the popular cruise hub the day before. The luxury cruise ship is 47,800 gross tons and carries over 900 guests each voyage.

The Fantastic ferry is operated by GNV and is 35,222 gross tons. The vessel can carry over 2,000 passengers along with 760 vehicles so is not just a small ferry but also a passenger ship.