The two boutiques – LACOSTE and Carolina Herrera – will be the first at sea for each acclaimed brand, as well as the first boutiques to be designed specifically for a Norwegian Cruise Line ship. These new offerings are the latest of several that are shaping Norwegian Escape into one of the most sensational cruise ships at sea, with other alliances including Jimmy Buffett’s Margaritaville; James Beard Award-winning Iron Chef Jose Garces; Michael Mondavi Family Wines; Tony Award-winning Broadway musicals After Midnight and Million Dollar Quartet; and more.

“These exclusive boutiques from two legendary fashion industry icons add further glamour to one of the most exciting cruise ships ever built,” said Andy Stuart, Norwegian Cruise Line’s president and chief operating officer. “LACOSTE and Carolina Herrera will offer Norwegian Escape guests a shopping experience unlike any at sea.”

More than 80 years after its founding, LACOSTE continues to be a sport inspired lifestyle brand renowned for elegance and comfort. Famous for its iconic polo shirt, LACOSTE offers sportswear apparel for men and women, as well as footwear, eyewear, watches, fragrances, leather goods, and other items. The LACOSTE boutique aboard Norwegian Escape will include a wide assortment of clothing items, including signature polos, t-shirts, dresses, skirts, footwear, and accessories.

Carolina Herrera is an international fashion house recognized for timeless elegance and refinement. From fashion and accessories to fragrances, the brand embodies the creative vision established by founder, Carolina Herrera, over three decades ago. The Carolina Herrera boutique aboard Norwegian Escape will include beautiful, hand-selected luxury products, including handbags, leather goods, pashminas, scarves, jewelry, footwear and accessories.

In addition to dedicated boutiques, Norwegian Escape will feature further retail from widely-recognized brands including, but not limited to, Hublot, Bvlgari, Tissot and Uno de 50. The ship will be the first to introduce Ulysse Nardin watches, as well as a hand-picked collection of Columbian Emeralds, also exclusive to Norwegian Escape.

Norwegian Escape, soon to be the largest ship in the Norwegian Cruise Line fleet, will sail weekly seven-day cruises from her year-round homeport of Miami to the Eastern Caribbean beginning on November 14, 2015. The 164,600 gross ton ship will be the largest ever to home port year-round in Miami, carrying 4,200 guests to tropical Caribbean destinations including St. Thomas, U.S. Virgin Islands; Tortola, British Virgin Islands and Nassau, Bahamas. 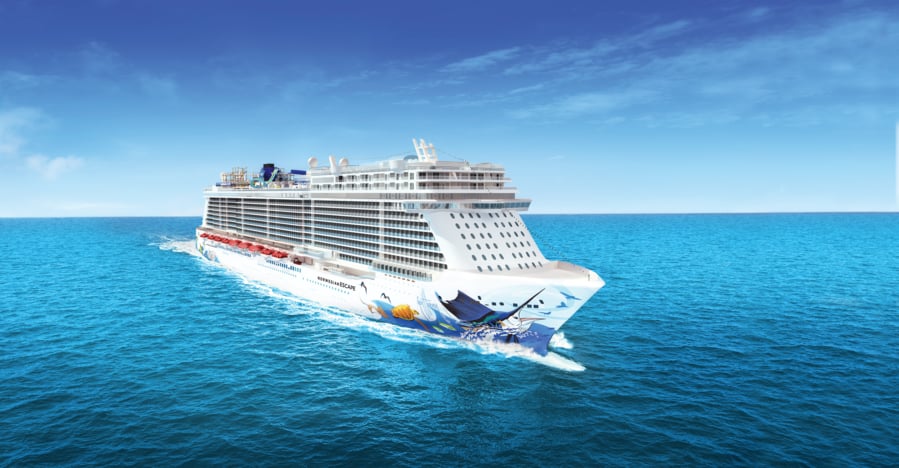