Politicians urge the CDC to strictly enforce its Framework for Conditional Sailing Order and to halt cruises if outbreaks occur. 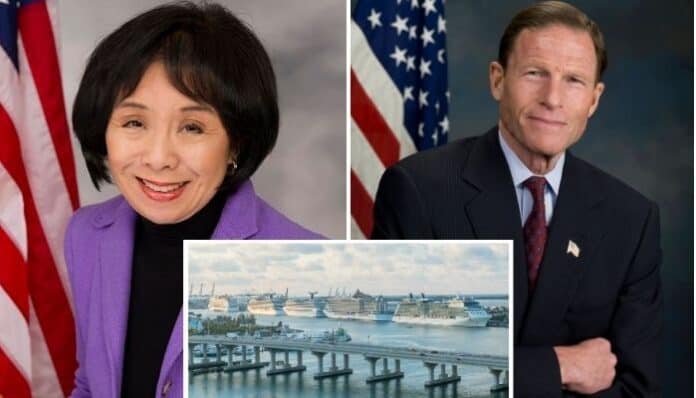 In a letter to the U.S. Centers for Disease Control and Prevention (CDC) director, Dr. Rochelle Walensky, two politicians have urged to strictly enforce the Conditional Sailing Order (CSO) if any new outbreaks occur on cruise ships.

This comes after growing calls for the CSO to be lifted by July 4 from state officials, cruise lines, and ports. Cruise lines have even proved their case that cruises can resume safely. However, there is another side of this, with some calling for strict enforcement on cruises.

Calls for Aggressive Action on Cruises

We’ve been reporting on the growing calls to lift the Conditional Sailing Order in recent weeks, which has reached the highest office in the U.S. However, Congresswoman Doris Matsui of Sacramento and U.S. Senator Richard Blumenthal for Connecticut are urging the opposite in a letter sent to the CDC.

“Given the potential for a large, virus spreading event on a cruise ship, the CDC appropriately issued its No-Sail Order to suspend cruise ship operations”

The Congresswoman and Senator who are long-time advocates for improving safety, security, and medical standards aboard cruise vessels, are urging the CDC to strictly enforce the framework for Conditional Sailing Order and to halt cruises if outbreaks occur onboard.

Matsui and Blumenthal continued to write:

“While the United States makes progress toward our shared goal of beating this pandemic, COVID-19 remains a grave public health risk that requires ongoing vigilance.”

“Prematurely lifting restrictions on cruising – with thousands of people in close proximity and conditions ripe for spread of infections – threatens a serious setback in this progress.”

The order was first introduced at the end of October 2020 and on April 2, the CDC released technical instructions as part of phase two in the four-phase framework. These newly released instructions have been called “largely unworkable” by the Cruise Lines International Association (CLIA). Since the instructions, there have been multiple calls to lift the order and even a lawsuit filed by the State of Florida.

You can read the full letter that was sent to the CDC director from Congresswoman Doris Matsui and Senator Richard Blumenthal below:

The Cruise Industry is Ready

The cruise industry has proved that cruises can resume safely, and since the pandemic first started in early 2020, cruise lines have implemented strict health protocols. The outbreak on the Diamond Princess in Yokahama, Japan, in the early months of the pandemic, was at a time when not much was known about the virus.

The industry has moved on and has focused on measures to make sure guests and crew remain safe. Cruise lines have been getting their own advice from expert health panels, and some have already issued vaccine mandates for all guests and crew.

The cruise industry in the U.S. has been suspended for more than a year already, and it has had a huge impact on jobs and related sectors. The states of Alaska and Florida have been severely impacted.

There is no doubt that Congresswoman Matsui and Senator Blumenthal want to help protect passengers and agree with the CDC’s advice that cruise travel is still a high-risk level. But the recent technical intrusions released and the advice is outdated as cruise lines have already implemented changes to stop this.

For now, the U.S. cruise industry remains on hold with major cruise lines already suspending operations out of U.S. ports through June 2021. There is a lot going on at the moment between the cruise industry and the CDC so do keep checking for all the latest developments.