Two large blocks of P&O Iona have come together to make another giant cruise ship owned by Carnival.

Just days ago we were posting about Norwegian Encore leaving the construction hall at the Meyer Werft shipyard in Papenburg, Germany. The shipyard has already connected two huge blocks in that very same hall making up the P&O Iona, a giant new generation cruise ship for Carnival-owned P&O Cruises.

Now that the two large blocks have come together, the ship will come to life externally and with the arrival of another large aft section.

Earlier in the month, the large glass SkyDome was also added when one of the blocks was located outside the hall. The large dome which was installed was a complex undertaking and not common on new cruise ships. We have a full post about the installation right here.

P&O Iona is the first Liquified Natural Gas (LNG) powered cruise ship for the cruise line and follows in the footsteps of similar new-generation ships of 180,000 gross tons ordered for sister cruise lines such as German-based Aida Cruises and Italian-based Costa Cruises.

Iona will be completed and join the British fleet in Spring 2020 and will be a total gross tonnage of 183,900 and a passenger capacity of around 5,200. She will debut in May 2020 and offer week-long Norwegian Fjord cruises out of Southampton, UK through September 2020. 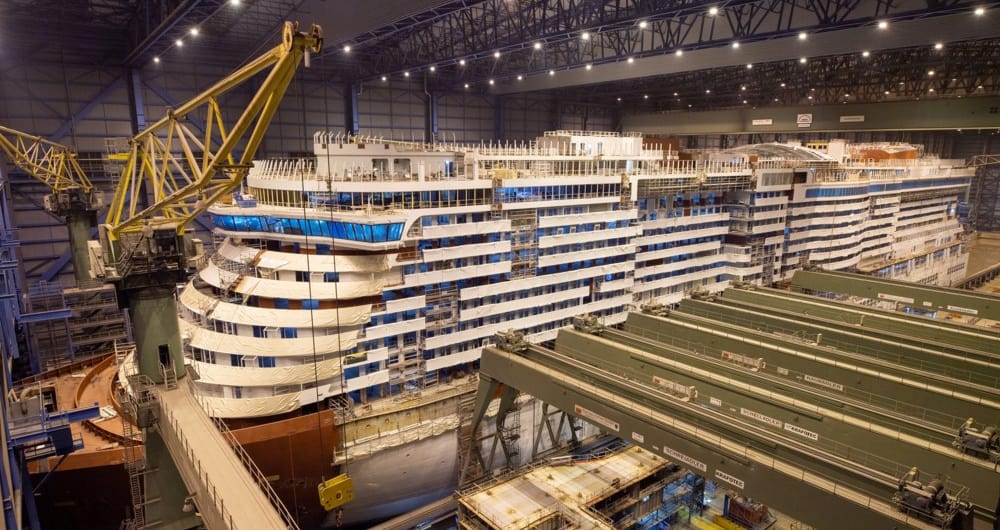