Travel chatbots are a growing trend, here's everything you need to know about your cruise virtual assistant.

Recently, we’ve heard the news about the launch of the first cruise chatbot with artificial intelligence – the CruiseBe chatbot. We decided to test it and figure out how convenient technologies can affect the cruise market. In general, chatbots are not new in the travel industry. Large giants, such as Expedia or Kayak, allow you to choose hotels, cars and book them. There are younger startups, such as SnapTravel, that also work in the hotel market.

There is Mezi known in the form of the mobile application. However, despite the abundance of these bots, this industry has just begun to develop. It was surprising that we didn’t find any similar projects that had been already launched in the cruise market. There were rumors that the Royal Caribbean planned to launch the chatbot soon, but there are no exact dates yet, and it’s a rumor for now. After all, we know at first hand that innovations in cruises can be implemented too long. Although the trends over the past 5 years are encouraging.

So what can the first cruise chatbot created by the Texas startup, CruiseBe, do? One of its functions, apparently, is the aggregation of information about possible leisure for a selected cruise. You tell the bot ‘plan my cruise,’ he suggests you choose your cruise company, ship, and cruise date, and then the bot generates a day-by-day schedule of your cruise, which you can see by clicking on the link.

As developers say, now the bot can plan the cruise itinerary for 80 percent of cruises for the next year.

Another interesting feature is the fact that the bot can simply give you information about the particular ship, show you her deck plans or cabins. It’s interesting that you do not need to select the ship from any lists but simply write, for example, “Tell me about Allure of the Seas” when communicating with the chatbot. By the way, the system with the port of calls is the same. You can ask the bot for information about 500 different ports. As we have understood, at the moment, the AI ​​of this bot is presented in the form of speech/text recognition and the ability to keep up the conversation. 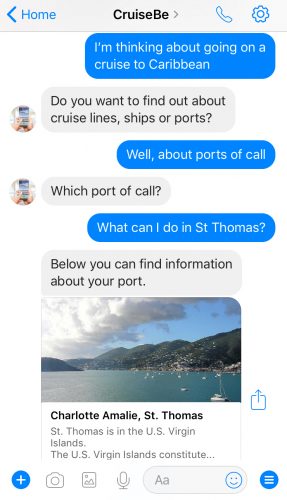 Actually, it’s interesting that this cruise chatbot is not exactly like other bots that we used to communicate with before because he manages to keep up the conversation. You can talk about movies, books, etc. with him. We got a little carried away. At some point, we even forgot that we were talking with the bot and not with a live person.

However, let’s return to the functionality. The bot can do much more than the functions we’ve mentioned above. You can ask the bot for a selection of articles about the particular ship, port or the history of cruises.

If you have free time, you can take a test or even play in the easy games like “Guess the ship or port of call by a photo.” 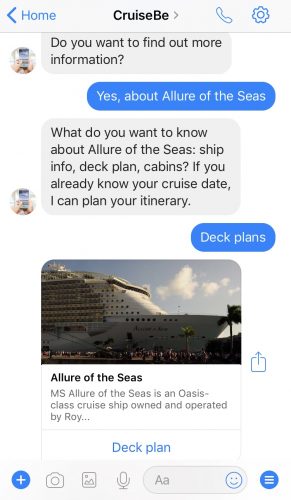 You can also subscribe to the newsletter and articles that the bot sends daily or once a week. By the way, it is quite convenient since the bot tells interesting news that you do not need to search on the Internet. And if you suddenly needed the help of the live person, there’s the standard “Message an agent” command. However, we did not use it.

In general, the bot is very interesting and useful for those who have already booked the cruise and want to get the day-by-day schedule of their itinerary. Besides, the bot will help you find information about ships and ports very quickly. And it’s really comfortable because you do not need to surf the Internet, look for details on separate websites – it’s enough to write your question in Messenger. We can even say that the bot serves a virtual travel assistant, who works 24/7 and immediately answers many questions.

In general, it is the great feature of any travel bot. Let’s remember the chatbots that help you find the hotel! Probably, it’s not quite usual still, but it’s interesting and practical when you can book the hotel without leaving Messenger. 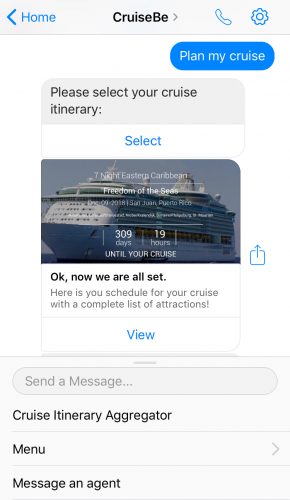 By the way, as for the booking. CruiseBe chatbot cannot fully replace the travel agent yet, as there is no search for cruises and the possibility of their booking via the bot. We’ve read somewhere that the developers planned to implement it in the future. To be honest, we are not sure that cruise lovers are ready to make such purchases and trust virtual travel agents at the moment. However, the future is unpredictable, and chatbots are likely to become our virtual travel agents in the next 5-10 years. After all, we are already used to Siri, Alexa, and Google Home. And the question “Hey Siri, what is the weather like tomorrow?” doesn’t surprise anymore. Although a person who talks to the phone like that could be considered crazy about 15 years ago.

In general, it’s very cool that more and more innovations, start-ups, and applications appear in the cruise industry today. It shows that our beloved industry is keeping pace with the times. It cannot but please us. See you in the virtual space!

By the way, the same startup has released the new cruise iOS app, which we will also test. 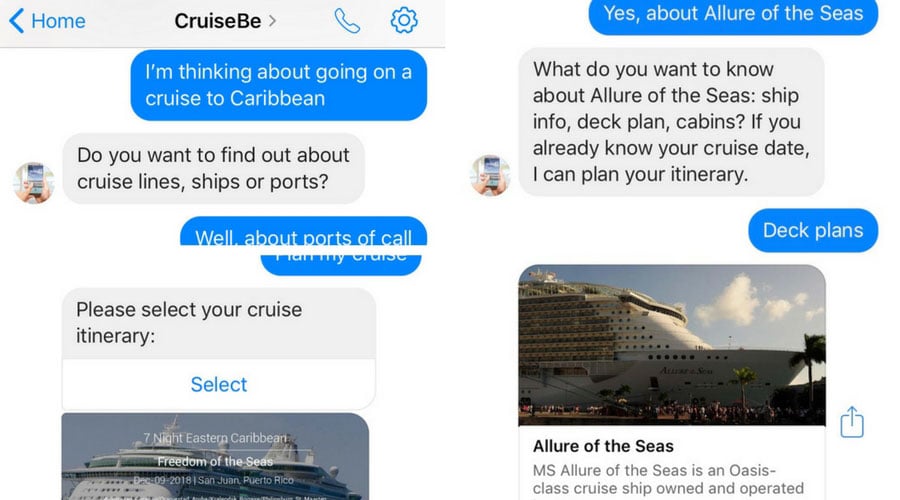