The year is coming to an end and it sure has been busy. As we head into 2017 Cruise Hive looks at its most popular news stories. The top 10 news posts which we list below have been most viewed by Cruise Hive readers.

Even though there has been some really sad news throughout the year we can be delighted with some crazy odd and funny events. The cruise industry can be full of surprises just like the third story on the list:

#1: Late Passenger Tries To Swim Back To Cruise Ship

When we first found out about this we had to make sure it wasn’t April 1st! Back in March, a British woman tried to swim back to the Marko Polo cruise ship while it was sailing away from Funchal, Madeira. 65-year-old Susan Brown apparently missed the vessel so decided to get a taxi to Santa Cruz so she could catch a flight, she saw the ship sailing nearby and decided to jump into the ocean with her handbag and swim back. Luckily she was rescued by some local fishermen.

#2: The Old Carnival Jubilee Cruise Ship To Be Scrapped

It wasn’t so nice posting about this legendary “Fun Ship” which helped turn Carnival Cruise Line into what it is today. The ship had a great life since entering service in 1986 but sadly in June it was announced the ship which was known as “Henna” at the time was to be scrapped. The post received a lot of views and Cruise Hive readers posted their memories of the Jubilee.

In August this astonishing story took the web by storm, 31-year-old Chinese woman Ms. Fang apparently fell overboard Mariner of the Seas as the ship was sailing back towards Shangai, China. The woman was cruising with her parents and while she was enjoying the views on deck 4 she fell over the railings at around 9:00 PM.

What’s shocking is that Ms. Fang spent 38 hours in the ocean adrift. She was finally rescued by local fishermen and was not in any life-threatening condition. This was probably one of the best ending stories of the year!

#4: Woman Shouts For Cruise Ship To Come Back After Missing Departure

The year wouldn’t be complete with some kind of pier drama! In this case, A woman was caught walking fast down the pier as the Carnival Spirt was just departing from Ketchikan, Alaska. The woman was asking people do get the ship to come back but sadly it never did. No doubt she had to get a flight back to Seattle and probably wishing she made it back onboard on time.

#5: Most Friendly Crew Can Be Found On Carnival Cruise Line

This post was actually posted just days before 2016 but it was one of the most viewed in the first half of the year. In the 2015 Cruise Ship Awards, Carnival Cruise Line was voted number 1 for having the friendliest crew. We received thousands of votes and it was a close battle between other fellow cruise lines. The awards had been ongoing since September 2015 and we finally announced the results just before 2016 started.

Unfortunately for 2016 we decided not to have the same categories, we’ve got other categories which are just as good and we’ll be revealing the winners at the end of December 2016.

#6: This Is What A Cruise Ship Sailing In Bad Weather Looks Like

We like to post a wide range of different news posts and will never only just choose stories which make cruise lines look good like other blogs. This brings us to this popular footage of the P&O Oceania caught in some bad weather. Even though it happened back in 2012 only recently a new video was posted showing just how bad it actually was.

P&O Oceania was caught in bad weather of the West coast of France in 2012 and at the time there were many ok-ish videos. Don’t let it scare you as the ship’s captain will always try to stay ahead of any storm in the area so guests can enjoy their cruise.

2016 was a year of cruise ship fights, especially for one Carnival ship! A second fight broke out onboard the Carnival Glory in September. Several female passengers decided to have a go right in front of the Casino bar on the ship’s promenade deck. The video which was posted received over 10,000 views and Cruise Hive decided to post about it so we could show readers what not to do during a cruise. it’s a good way to shame those involved and hopefully, learn from their mistakes.

The entire internet went crazy over this story and newspapers all over the world reported it. The newest and largest ship from Carnival Cruise Line hit the headlines for all the wrong reasons when it got too close to a local marina in Messina, Italy in August.

The huge 133,500 gross ton vessel managed to do a maneuver so close to the marina pier that the force from the propulsion completely sunk the pier and damaged many boats. Local boats in the harbor were overturned as the Carnival Vista tried its best to move away, sadly the damage was already done.

One of the biggest events for the cruise industry in 2016 was when Hurricane Matthew battered the Caribbean, Florida and parts of the U.S. East coast just three months ago. Just about all major cruise lines were affected by the powerful Hurricane which at times was a category 5.

Thousands of cruise ship passengers were affected by altered itineraries and canceled voyages. Many of the world’s biggest cruise ports including PortMiami and Port Canaveral also closed. it comes as no surprise this news story was so popular as people inFlorida and cruise passengers wanted the latest updates and how it may affect them.

And finally, we come to number 10 in the list which is another post related to weather. Rhapsody of the Seas which is operated by Royal Caribbean was damaged after being caught in sudden strong winds in September. There was damage do the ships Viking Crown Lounge as seen in the video along with some minor damage on the open decks. There was also reports that the ship listed heavily.

Well, now that 2016 is coming to an end we do hope there is plenty of good news next year and all our readers get to enjoy a cruise away from their busy lifestyles. Have a great festive season folks and we’ll see you soon. 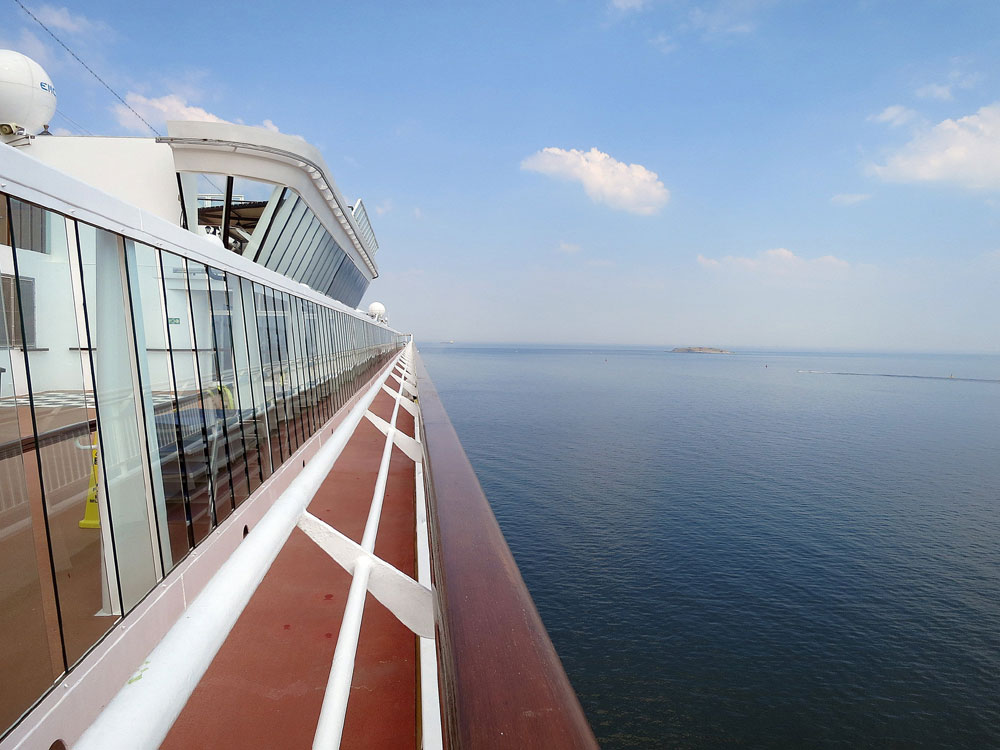