Carnival Liberty experienced an issue with the ship’s bow thrusters during the previous voyage (May 2-7).  Bow thrusters are required during docking maneuvers. They are not required for the normal operation of the vessel except when coming in and out of port. In the absence of full bow thruster capability, the ship can arrive and depart a port with the assistance of tug boats and maintain its normal itinerary.

Based on when the issue occurred during the last voyage, we were not able to secure tugboat assistance in Cozumel in time to call at that port. Future voyages are expected to operate as scheduled and the ship is presently on a new voyage.

Technicians are working to resolve the issue and tugboat assistance for docking maneuvers will be arranged as needed in the interim until the repairs are completed.  On last week’s voyage, given the missed call in Cozumel, guests were  provided with a $100 per person onboard credit.  The ship did make its scheduled call in Progreso.  Liberty departed on her next voyage on Saturday and is scheduled to visit both ports of call on the itinerary including Cozumel.

Due to a thrusters issue the Carnival Liberty was forced to cancel its port of call at Cozumel, Mexico on Thursday. If there were tug boats available at the port then the ship would have been able to dock but without assistance the ships thrusters are unable to maneuver the ship into position.

In a letter to guests onboard the Carnival Liberty the cruise line said the ship had to cancel the call at Cozumel because of a bow thrusters issue which first occurred in Progreso on Wednesday, May 4. The thrusters issue is not related to a propulsion issue which delayed the ship’s arrival into Galveston, Texas on Monday, that problem has been fixed. Carnival also said all onboard services are functioning normal and Carnival Liberty’s arrival into Galveston on Saturday, May 7 will not be affected.

You can read the letter below which was provided to Cruise Hive from a crew member and posted on Facebook from a guest: 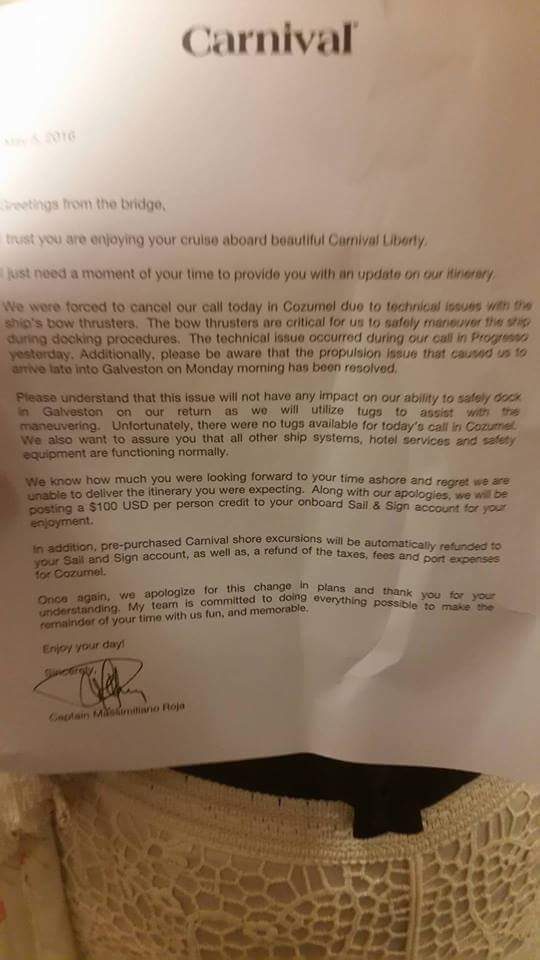 As a result of the cancelled call at Cozumel, all guests are getting a $100 onboard credit on sail and sign accounts. Any guests who booked a shore excursion on the island will get a full refund including any other additional fees for visiting Cozumel.

Carnival Liberty was sailing a 5-night Western Caribbean cruise and arrived back at its home port in Galveston, Texas today. We’re not sure if the next voyage will be affected by the bow thrusters issue, we have contacted Carnival about this and will update this post once we get a response. 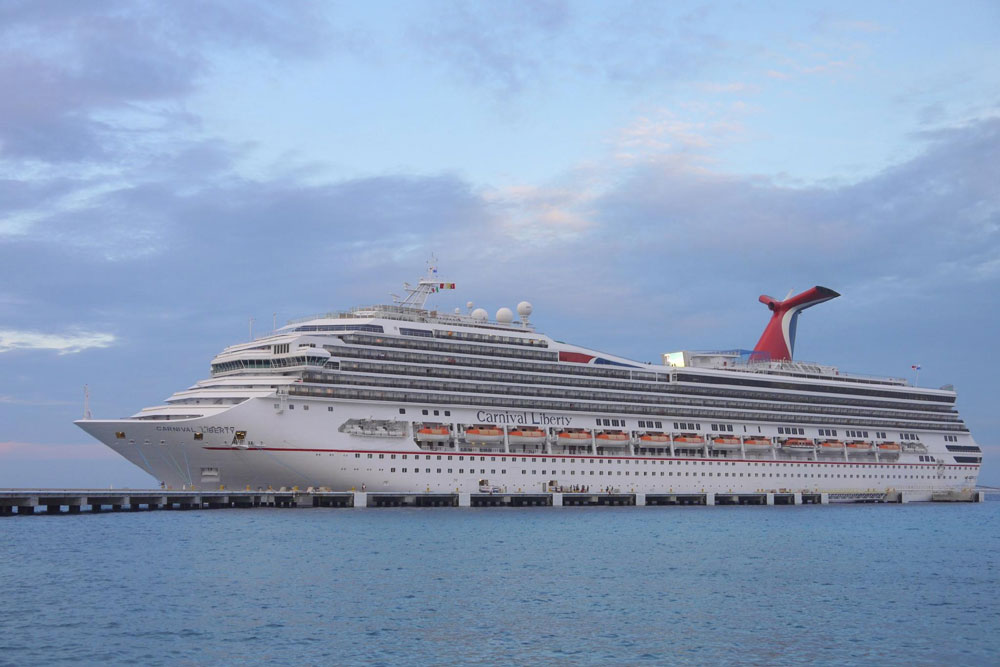