What a day it was for Princess Cruises which dealt with three major construction milestones for three different future Princess cruise ships. All this happened across two shipyards.

A Busy Day for Princess Cruises

Princess Cruises celebrated three milestones at the Fincantieri Monfalcone shipyard in Italy yesterday. There was the steel cutting ceremony for the final Royal class cruise ship, the keel laying ceremony for Enchanted Princess and the Madrina Celebration for Sky Princess.

That’s three Princess ships now under construction. Expect plenty of announcements and news as we get closer to each ship delivery.

“The number of people enjoying cruise vacations has increased on average more than one million new cruisers every year over the last decade, an overall increase of more than 68 percent.”

“As we continue to grow our fleet with five new ships arriving by 2025, we’re proud to not only celebrate these three major construction milestones in the same day but also to continue to innovate our product with cutting-edge technology and elevated guest experiences that will be offered on all of these ships.”

The cruise line celebrated with Sky Princess Madrina Ms. Kerry Ann Wright, 2nd officer for Princess Cruises. She was chosen by her fellow team members and this is thanks to the recent float out of the new cruise ship which will join the fleet in October 2019.

One of the biggest highlights about the fourth Royal class ship will be the largest balconies at sea. The balconies for guests in the sky suites will measure 1,012 square feet for the starboard side and 947 square feet for the port side. They will also offer 270-degree panorama views and have a sleeping capacity for five guests.

The ship is approaching the interior fitting out phase at the Fincantieri shipyard in Italy. Once completed the vessel will be 143,700 gross tons and a guest capacity of 3,660. She will be similar to sister ships Royal Princess, Regal Princess, and Majestic Princess.

Enchanted Princes will become the fifth Royal-class cruise ship and will arrive in 2020. The cruise line celebrated the keel laying on Valentines Day.

This marks a major development in the construction process as the bottom-most part of the ship is lowered into position. In this case, the keel weighs approximately 500 tons. Many more block will be added through the year to make the ship as one.

A traditional coin ceremony was held with the welding of an OceanMedallion into the ship. Executives from the cruise line and the shipyard along with invited guest attended. More details about Enchanted Princess will be revealed in the coming months.

And we finally come the very last Royal class cruise ship which is yet to be named. Officially construction began yesterday by the first piece of steel being cut.

The ceremony actually took place at the Fincantieri shipyard in Naples, Italy but the major milestone was broadcast live the Monfalcone shipyard which is where most of the action is taking place.

We don’t much about the future Princess ship just yet but she will be the sixth in her class and arrive in 2022. After this ship, the Carnival-owned line will move into a new era of fully powered Liquefied Natural Gas (LNG) ships with the first arriving in 2023. Read more about the future ships right here. 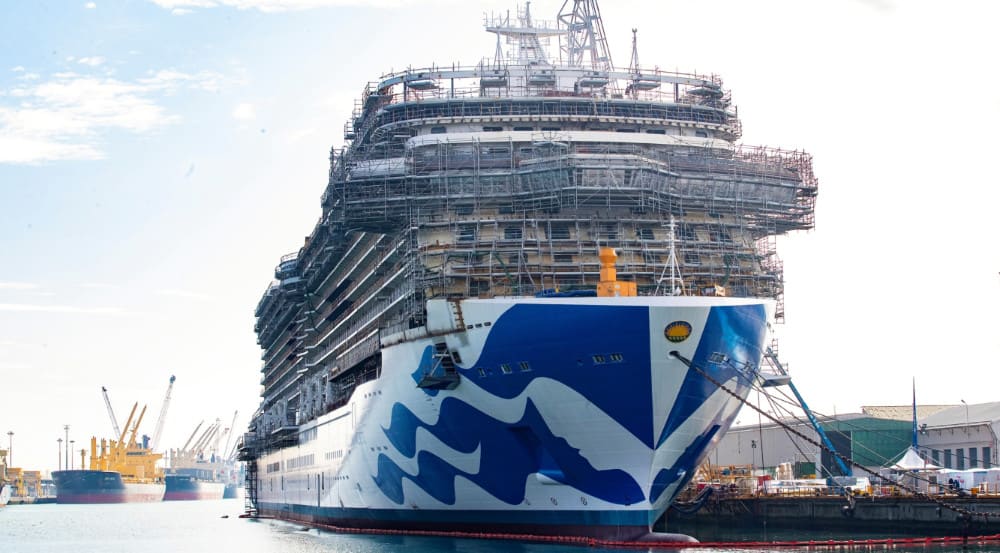