Thousands of People Watched 3 Cunard Ships Dance On The Mersey

Over the weekend Cunard Line had a huge event to celebrate the company’s 175th anniversary. Thousands of people watched the festivities along the River Mersey in Liverpool.

Queen Mary 2, Queen Elizabeth and Queen Victoria met on the Mersey on Sunday, 25th May. The Cunard vessels put on a grand show to hundreds of thousands of people watching from shore and possibly millions watching the live stream. The largest passenger ships ever to muster together on the River Mersey, lined up across the river as the Red Arrows performed a fly-past overhead to the delight of the spectators.

Commodore of the Cunard fleet Christopher Rynd said, “It’s been a privilege to bring the Cunard fleet together on the Mersey for the first time ever to mark Cunard’s 175th anniversary year and our historic and ongoing partnership with Liverpool, our spiritual home.”

Take a look at this breathtaking Time lapse video of the three Queens coming together:

At 10:45 AM the Queen Mary 2 which is the fleets largest cruise ship departed its berth in Liverpool to meet up with sister ships Queen Elizabeth and Queen Victoria. once meeting up the vessels put on a show never to forget which began at around 12:30 PM. The ships did several planned maneuvers and just 426 feet apart when lined up opposite the Cunard building. The fog horns from all three Queens were also heard across the Mersey.

“All of us at Cunard are moved by the incredible reception the Three Queens have received from the people of Liverpool and beyond today,” remarked Richard Meadows, Cunard, President, North America. “This moment has brought the relationship between Cunard and the Mersey alive, and that together, Liverpool and Cunard have paid tribute to the people who have created our 175 years of shared history.”

Queen Mary 2 is 150,000 gross tons at when it first entered service in 2004 was the largest cruise ship in the world. sister ships Queen Elizabeth and Queen Victoria are both 90,000 gross tons. This year the british based cruise line is celebrating its 175th anniversary and this was just one event of many throughout 2015. Take a look at our special article which is all about the anniversary and what’s coming up next. 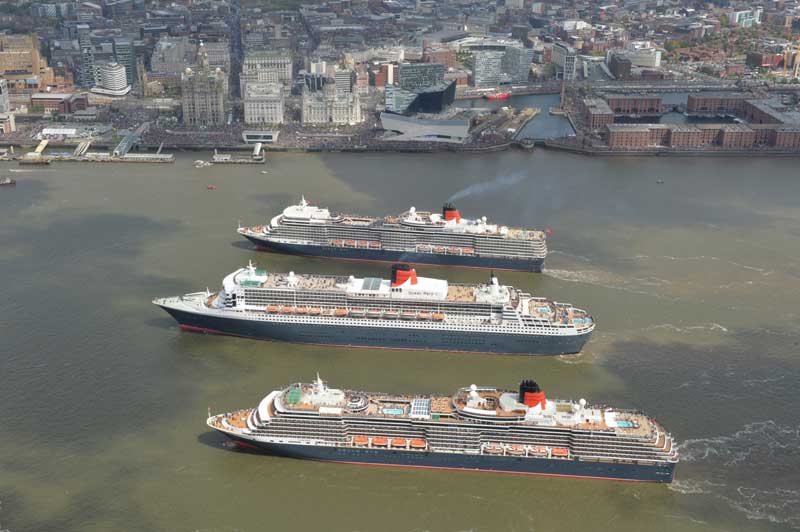