The traditional ceremony took place yesterday at Fincantieri’s Ancona shipyard, just one day before the company takes delivery of its second ship, Viking Sea, which will officially debut to guests next month. Viking Sky is scheduled for delivery in early 2017.  The company also today announced that it has placed an order with Fincantieri for three additional sister ships, which will bring Viking’s total number of ocean ships to six by 2020.

“It is a special day when a new ship meets water for the first time. This is our third ship to be floated out in three years, so it is indeed a proud moment for our entire Viking family,”

“Our first ship, Viking Star, has enjoyed great success in her maiden season. I look forward to her five sister ships experiencing the same respective success as they debut over the coming years.”

A float out ceremony is significant because it denotes a ship moving into its final stage of construction. Viking Sky’s float out began at approximately 4:30 p.m. local time on March 23, and in keeping with maritime tradition, a madrina – a special woman of honor – assisted with the ceremony. Marit Barstad, sister of Viking Chairman Torstein Hagen, served as Viking Sky’s madrina and welded commemorative coins under the ship’s mast that represented three family birth years.

Ms. Barstad also cut a cord to allow water to begin flowing into the ship’s building dock. Following a two-day process that will set Viking Sky afloat, she will then be moved to a nearby outfitting dock for final construction and interior build-out. 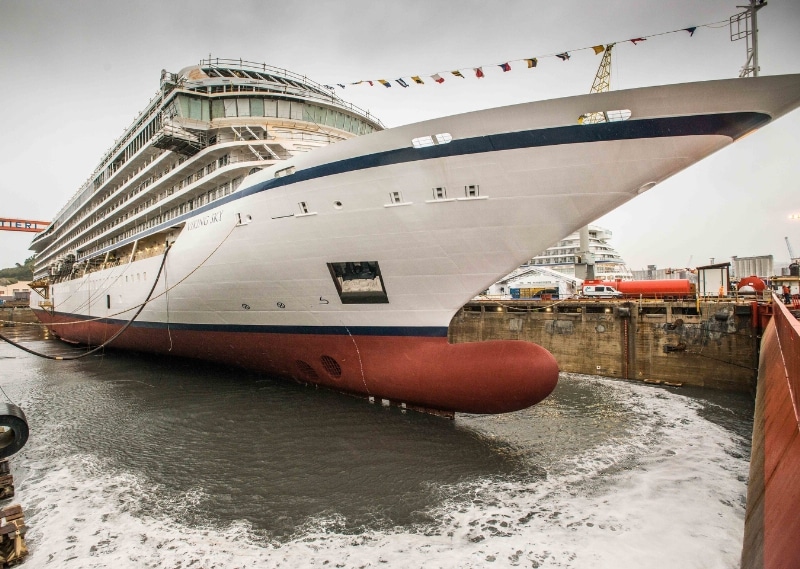