Take a look at the things to love and do on Royal Caribbean's Liberty of the Seas cruise ship, a Freed-class vessel perfect for a vacation at sea.

The Freedom class has now been overtaken by the Oasis class as some of the largest passenger ships in the world — but does that mean you shouldn’t take a cruise on one of these magnificent Freedom-class cruise ships, or on the Royal Caribbean Liberty of the Seas cruise ship in particular? Absolutely not! There’s still plenty to enjoy aboard this ship.

Check out our nine things to love about Royal Caribbean cruise ship.

1. Liberty of the Seas, while not the largest cruise ship on the oceans, is still pretty big

The ship sports a gross tonnage of 155,889 GT, and a length of 1,111 feet. There are 18 decks in total and, at maximum occupancy, the ship holds 1,360 crew members and 4,960 passengers. Liberty of the Seas is the largest Freedom-class cruise ship.

Since 2007, the large ship has received multiple renovations, including some minor renovations in 2011 (that included the addition of the main pool’s outdoor video screen) and larger renovations in 2016, which added cabins, new restaurants and lots of enhancements for the pool deck, as well as new sports facilities, including the water slide complex.

These changes actually increased Liberty of the Seas’s gross tonnage, which gave the ship its status as the largest Freedom-class cruise ship and the 11th largest cruise ship in the world at the time.

2. You’ll never run out of fun while you’re aboard Liberty of the Seas

If it’s fun and thrills you’re after, Liberty of the Seas delivers. There’s a ton to do, no matter what kind of traveler you are — couple or family, single or multigenerational traveler.

Outdoor fun is particularly plentiful, with the three different pool spaces and the water park featuring the Tidal Wave slide, as well as two additional water slides that both offer their own jaw-dropping, heart-pounding thrills. There’s also the FlowRider surfing simulator, so you can try your hand at riding the waves, all from the safety of the top deck.

For families who want to split apart for their fun, that’s possible, too, with lots of kids programming for all ages, nursery to teens, and more laid-back fun for parents in adults-only areas of the ship, a spa and quieter spots, such as the wine bar.

3. You don’t have to break the bank to have a great time while aboard the Royal Caribbean Liberty of the Seas cruise ship

If you only want to pay for your cabin and cruise fare and nothing else, you can still have an awesome time aboard Liberty of the Seas. The cruise ship offers tons of included activities and dining selections, making it an excellent value for your money.

Included with your cruise fare, you’ll enjoy meals in the main dining rooms (three to choose from!) and at the buffet and several other eateries, all the theater shows, the majority of the ship’s activities and events, the outdoor attractions, kids programming, fitness center access and more.

We’ve kind of already touched on all the new features that the Royal Caribbean Liberty of the Seas cruise ship received during its 2016 dry docking, but let’s take a moment to appreciate all that those new features mean.

Now, families and kids enjoy a new water park feature, with a trio of waterslides called Perfect Storm, and the very popular boomerang-style slide (the first of its kind at sea) called Tidal Wave. The other slides are Cyclone and Typhoon and offer their own thrills. The separate Splashaway Bay is a water park created for smaller children and is an adult-free zone.

But the renovations didn’t stop there. The new staterooms include 26 new Panoramic Ocean View staterooms, with floor-to-ceiling glass walls, for views like you’ve never before enjoyed on a cruise ship.

If you do decide to splurge on the additional dining options that aren’t included in your basic cruising fare, you’ll find that across all of the ship’s eateries, Royal Caribbean has made an effort to deliver a blend of excellent service with top-tier culinary experiences.

Beyond the main dining rooms and buffet, some of the “extra” dining options that cruisers can enjoy include the new Mexican eatery Sabor, the Cupcake Cupboard (which also hosts decorating classes, in addition to selling delicious decorated cupcakes), Ben & Jerry’s, the new Italian restaurant Giovanni’s Table, Chops Grille for steakhouse-style dining and diner-inspired favorite Johnny Rockets. Additionally, you can book entire dining experiences, including a mystery dinner theater experience and a special Chef’s Table dinner.

6. Entertainment is plentiful during your entire cruise

During any Royal Caribbean Liberty of the Seas cruise, you’ll find that the entertainment is not only high-quality, but it’s nearly everywhere, all the time. You have your primary theatrical entertainment in the huge Platinum Theatre, where there are two showings of a headliner show most evenings. Then, there’s an additional theater that runs ice skating shows (and when there’s not a show, you can actually go to the rink and get in some skating practice).

Live music can be found all around the ship. A movie screen shows films and television throughout the day in the pool area. Daily entertainment is provided by the enthusiastic staff as well, and takes the form of trivia games, art galleries, seminars and more. Game shows, karaoke and dance parties all take the stage during the evening hours.

7. You’ll never go long (or far) without a drink in hand

Watering holes aboard Royal Caribbean’s Liberty of the Seas are plentiful, that’s for sure. Night or day, you’ll find bars and lounges serving up beers, wines and your favorite cocktails. No matter what kind of bar scene you normally enjoy (loud and raucous, relaxing and quiet), you’ll find it aboard this cruise ship.

Some of your options? Try On Air Club, for karaoke nights, Wii games and low crowds. Visit Boleros for salsa, jazz and dancing. Schooner Bar is a nautical-themed watering hole with trivia and piano music. Wine lovers enjoy Vintages, where you can taste to your heart’s content and then pair your favorite vino with some tapas or charcuterie. Hoof and Claw Pub is a British-style spot.

The new R Bar took the place of the ship’s previous Champagne bar and is now a more elegant spot for wine. Star Lounge is the Art Deco lounge with games and lots of seating. The Plaza Bar is a coffee-to-cocktails watering hole. Two bars near the pool give you frozen cocktails and beer buckets.

8. Catching a spot in the sun is as easy as heading to Deck 11

If you’re on a cruise, chances are you don’t want to spend all your time indoors, even if there’s plenty to enjoy within Liberty of the Seas’s interior. So, head outside and catch some rays. There are plenty of sunny spots for you to enjoy and many are on Deck 11. That’s where you’ll find the main pool and the hot tubs, a space that’s usually pretty crowded and filled with cruisers.

If you’re fine with that, you can kick back and relax with a frosty beverage from one of two pool-adjacent bars, while people watching, maybe participating in a staff-led game or enjoying some live music.

If you want a quieter spot to sunbathe, there’s always the Solarium area, which is restricted to cruisers ages 16 and up. There’s a pool, lounge and two hot tubs here, as well as some swings. Just keep in mind — this area is actually enclosed. You’ll still get those rays, because it’s all enclosed in glass, but you won’t get that outdoor pool feel.

Deck 12 overlooks the main pool area and has lots of sun loungers. VIP suite passengers will have reserved seats here. Deck 13 has even more sun loungers, as well as some shadier spots in case you need a respite from the sun.

If you want to have a little more fun while catching your rays, you can also find a mini golf course on Deck 13.

9. Despite Liberty of the Seas’s age, it offers top-tier tech

Don’t think that just because you’re cruising on an older ship that you won’t be able to take advantage of some pretty advanced cruise ship tech. Liberty of the Seas is outfitted with the more traditional computer hub (on Deck 8, with more than a dozen computers available), but you probably won’t even need to visit the computer hub thanks to the onboard WiFi. Royal Caribbean boasts its own WiFi service, VOOM, which allows you to surf and stream for a set fee. Fees are based on internet speed.

Also Read: 11 Best Things to Do on Royal Caribbean’s Navigator of the Seas

Additionally, the cruise ship is outfitted with touch screens throughout to help you not only learn more about the scheduled entertainment and activities, but to also help you navigate your way around the ship and find certain spots.

So, ready to jump aboard a Royal Caribbean Liberty of the Seas cruise? There’s certainly lots to love and it won’t be a choice you regret.

Liberty of the Seas FAQ:

When was Liberty of the Seas built?

Liberty of the Seas is the second Freedom-class cruise ship for Royal Caribbean, following Freedom of the Seas. It was built in 18 months in Finland and was delivered in April 2007, before embarking on its maiden voyage in May 2007.

There are 18 decks in total and, at maximum occupancy, the ship holds 1,360 crew members and 4,960 passengers. Liberty of the Seas is the largest Freedom-class cruise ship.

How many pools are on Liberty of the Seas?

Liberty of the Seas offers three pool areas, with a main pool flanked by hot tubs; a child’s pool area; a waterpark with three different water slides; and an adults-only pool area, the enclosed Solarium, also with additional hot tubs.

What class ship is the Liberty of the Seas?

In regards to size, the Freedom class has now been overtaken by the Oasis class as some of the largest passenger ships in the world.

What other Royal Caribbean ships are the same as Liberty of the Seas?

While not identical, Liberty of the Seas is fairly similar to its two sister Freedom-class cruise ships, the older Freedom of the Seas and the younger Independence of the Seas. 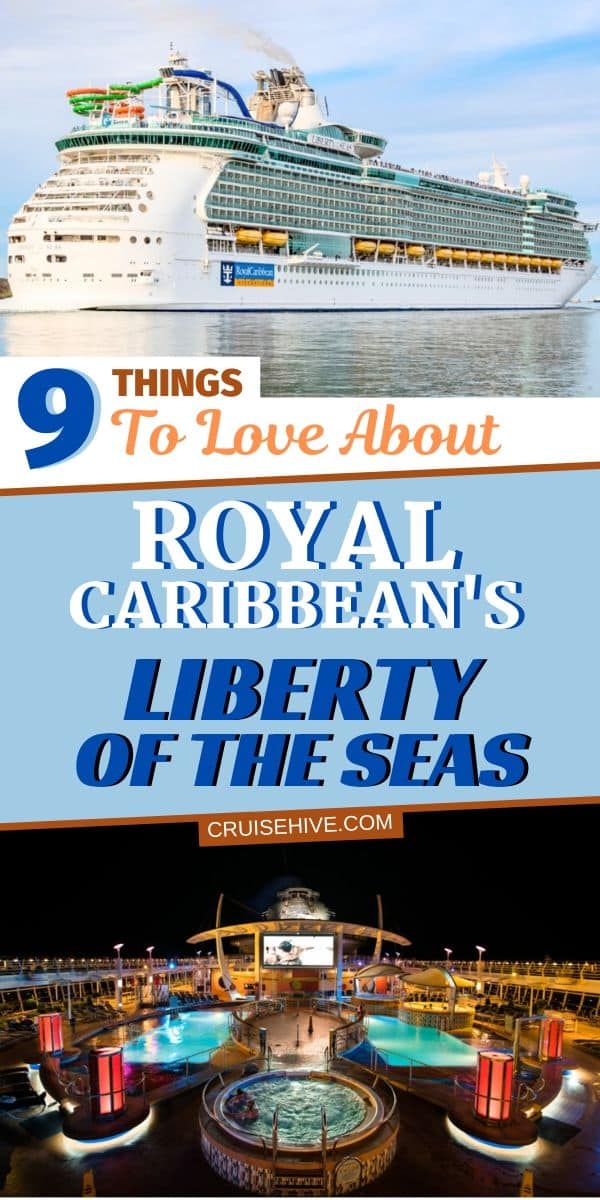