11 Things to Know About the Norwegian Getaway Cruise Ship

Here's everything to know about the Norwegian Getaway cruise ship operated by Norwegian Cruise Line (NCL). Things to do on board with stats and more.

Worth Reading: 13 Things to Know About the Norwegian Escape Cruise Ship

Norwegian Getaway, for example, was launched in 2014 as the ninth-largest cruise ship in the world at the time, with significant amenities and unique attractions. Some of these included a restaurant by celebrity chef Geoffrey Zakarian, a magic-centric entertainment venue called the Illusionarium and then a Grammy Award-themed entertainment venue.

The vessel debuted with a very “Miami” vibe throughout (and the ships’ multiple godmothers are the Miami Dolphins cheerleaders), partly in thanks to the ship’s hull.

Cuban-American Miami artist David “LEBO” Le Batard designed the ship’s hull with a Miami-centric mural featuring vibrant colors and nautical theming, and that theme extends throughout the ship, into the public spaces and guest staterooms.

1. The on-board water park is a can’t-miss attraction

While water parks are currently not that much of a new thing on cruise ships, Norwegian Getaway’s water park is really a can’t-miss attraction mostly due to its size.

2. The oceanfront dining is top-tier

One of the really innovative features to debut on Norwegian Getaway was The Waterfront space. While this is a type of space you can find on some other cruise ship’s now, it really was a unique feature when Norwegian Getaway first set sail in 2014.

The Waterfront offers oceanfront dining from the majority of the ship’s restaurants, with space for al fresco seating that allows you to overlook the water with zero interruptions. (And, for foodies, one of the restaurants where you can do so is Ocean Blue, one of the ship’s food venues created by Food Network celebrity chef Geoffrey Zakarian.)

3. Even though it’s on the smaller side now, there’s still loads crammed into Norwegian Getaway’s space

Despite this, there are still tons of restaurants and entertainment venues crammed onto Norwegian Getaway. You’d have a difficult time seeing and doing everything on the ship during just one cruise. There are a stunning 28 restaurants, more than 10 bars and lounges, a theater, a sports complex and more.

Each cruise ship has basically what you might consider its “heart” — the place where all the activity happens and where cruisers come together to mix, mingle and just have a good time. On Norwegian Getaway, that space is 678 Ocean Place.

The three-deck space stretches across Decks 6, 7 and 8 and gives you direct access to most of the ship’s bars and lounges, as well as the casino and dining options. Just be warned — sometimes this area gets a little crowded.

5. The complimentary dining options aboard Norwegian Getaway provide you with plenty of variety

With 28 different restaurants and eateries, Norwegian Getaway cruisers certainly aren’t lacking for choice when it comes to where to grab breakfast, lunch or dinner. Even if you don’t splurge on some of the specialty dining options, you’ll still have plenty of options to pick from.

Savor and Taste are the duo complimentary main dining rooms located adjacent to one another. They offer a range of international fare at breakfast, lunch and dinner. Tropicana is a third complimentary dining room that serves the same menu, but with just a different vibe and decor (think Latin supper club).

The Garden Cafe is the cruise ship’s buffet, with ocean views and snacks or full meals available just about all day long. The options are pretty varied, with all your buffet staples and lots to choose amongst.

The Flamingo Bar & Grill offers Latin-style dishes near the pool, while O’Sheehan’s serves bar food with a side of fun (seriously — the bar and grill features TV screens, a mini bowling lane, billiards tables and arcade games).

If you decide you want to explore even more of Norwegian Getaway’s 28 restaurants, you can easily do so for reasonable fees. Many of the specialty restaurants serve guests at set fees around $20-$40 per person.

Teppanyaki is a hibachi-style grill; Le Bistro is a French restaurant with an excellent wine list; Le Cucina serves Italian fare with outdoor dining available in The Waterfront area; Cagney’s is a traditional steakhouse; Moderno is a Brazilian steakhouse; Ocean Blue is Geoffrey Zakarian’s specialty creation serving upscale seafood; Wasabi is a sushi bar; and then two options, Carlo’s Bakery and Dolce Gelato, serve up eats to sate your sweet tooth.

Additionally dining experiences are offered throughout any cruise itinerary, such as cake decorating classes at Carlo’s Bakery, dinner shows in the Illusionarium and multiple-course dinners at the Chef’s Table.

7. Entertainment options board Norwegian Getaway are just as varied as the food

You won’t be left wanting for entertainment options when you take a Norwegian Getaway cruise.

The Getaway Theater offers Broadway-style shows, as well as game show-style entertainment. Movies are also on the menu. Throughout the day, you’ll find comedy shows, bingo, art auctions, demonstrations, magicians, dance classes, arts and crafts, tours — you can pack every moment of your cruise with something fun to do and never do the same thing twice.

At night, though, the entertainment really heats up, with more adult-centric activities, including adults-only comedy shows, piano duels, dancing, karaoke and more. A lot of the parties are themed, so one night might be all 80s and another might be a Glow Party.

8. There’s always a spot to grab a drink, and the lounge and bar options are plentiful

As you probably expected, given the wide swathe of restaurant options and entertainment options, when it comes to bars and lounges, the same theme continues — there are endless ways to play aboard Norwegian Getaway.

There are more than a dozen different bars and lounges, and all of them offer something different, whether it’s a cigar bar, an ice bar, an open-air bar overlooking the ocean or anything in between.

The Bar at the Atrium is a lively spot conveniently located in the ship’s main atrium; Mixx is a standard watering hole near the main dining rooms; O’Sheehan’s serves up beer in a fun setting; Bar 21 is an upscale spot near the casino; Sugarcane Mojito Bar embodies that Miami vibe the rest of the ship boasts; Sunset Bar is similarly Miami-inspired; The Svedka Ice Bar is just that — an ice bar brought to you by the vodka brand; Prime Meridian is a roomy, refined bar; The Waves Pool Bar serves up drinks poolside and The Flamingo Bar & Grill is also near the pool.

9. Getting active is just a matter of trying

If you like to stay active when it comes to your fun, versus watching a show or a seminar, you’ll find plenty of ways to do so aboard Norwegian Getaway. Beyond the various pools, including the main pool on Deck 15 and whirlpools and a kids pool nearby, you’ll have complimentary access to the fitness center (though it’s an extra fee for classes).

Then, there are five water slides, a ropes course with a real plank that stretches out over the ocean, a zip line, a rock climbing wall and a mini golf course.

And if you’re looking for a spot to soak up the sun, you can do so on Decks 16 and 17. On the former, Spice H20 is an adults-only space with hot tubs and a waterfall, and it turns into a party zone after hours.

On Deck 17, there’s Vibe Beach Club, a less raucous space that’s also adults-only, with a huge hot tub and cabanas. Spice H20 is free for everyone to enter, while Vibe Beach Club keeps things more exclusive, with an entry fee and guest cap of 60 guests.

11. Need something extra? You got it

Lastly, one of the (many) great things about the Norwegian Getaway experience is the service. The crew and staff really go out of their way to make sure that you have everything you need at every time of the day. Want some reading material? Head to the library, where you can check out both physical and electronic books.

Want a quiet spot to get away from the fam? The library will also keep you covered there. Need a little retail therapy? Head to the shops on Deck 8 for duty-free; you can also find common items and sundries you may have accidentally left behind at home.

So, ready to take your Norwegian Getaway cruise?

We don’t blame you! This cruise ship offers everything you could need during a fun time at sea. There’s no bother that this Breakaway-class ship is a bit older and smaller than some of its younger sisters. It’s just as amazing and offers all that Norwegian is known for, with attractive itineraries taking you across some of the world’s hottest waters.

Also Read: 16 Things to Do on a Norwegian Joy Cruise

How many pools are on the Norwegian Getaway?

There are three pools aboard Norwegian Getaway, along with five waterslides and nine jacuzzies. The main pool is situated on Deck 15 and is flanked by four jacuzzies, while another pool sits nearby in the water park. Another pool is located in the exclusive, VIP, Haven guest-only courtyard, near the Haven guest private spa and lounge.

What class cruise ship is the Norwegian Getaway?

How large is the Norwegian Getaway cruise ship? 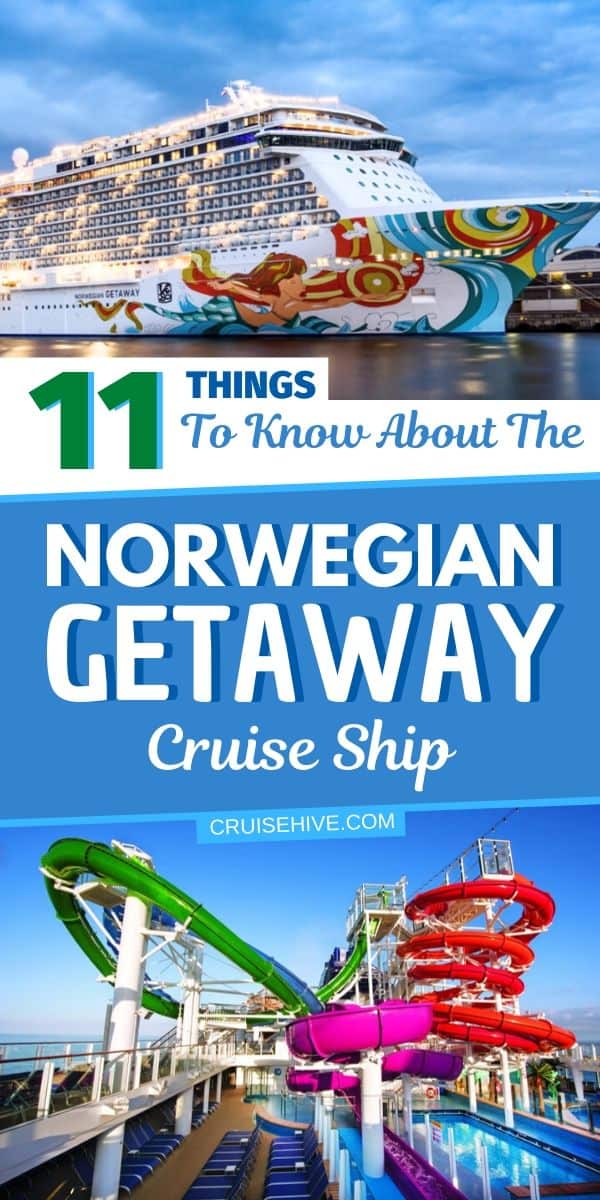