13 Things to Know About the Norwegian Escape Cruise Ship

Originally serving the Caribbean, since, Norwegian Escape has served passengers around the U.S. East Coast, New England, Canada and Northern Europe, among other popular cruising destinations.

1. If you want to experience absolute exclusivity as a VIP cruiser, well, you can

Thanks to Norwegian Escape having a huge exclusive wing, VIP cruisers have more room than ever to stretch out and enjoy being a member of the cruising elite. Norwegian calls the VIP section of its cruise ships its Haven, and Norwegian Escape boasts one of the largest Havens of all the Havens on Norwegian ships. What can you find within? There are not only more than 50 suites, but also a restaurant, lounge and pool, available only to Haven guests.

2. You can’t miss the water park — it’s one of the best activities on the ship

During your Norwegian Escape cruise, you absolutely have to spend at least one afternoon enjoying the ship’s AquaPark. The water park includes lots of fun activities, including four different water slides, a kids water park, a pool and a poolside movie screen. The AquaPark isn’t just about the aqua, though.

Other activities keep you nice and dry, including a rope course (the largest rope course at sea), a golf course and other fun activities. These are all top activities for traveling families and the perfect way to get in some family bonding time while you’re cruising. There’s something for everyone!

3. The amenities gets pretty sophisticated when it comes to tech

As a newer ship, Norwegian Escape has truly taken advantage of all the tech it can, and it weaves that technology into its various entertainment and amenity offerings. As soon as you’re aboard Norwegian Escape (or even before), you’ll want to download the all-new Cruise Norwegian app, part of the brand’s suite of tech resources. It’s branded as your travel companion, helping you experience an unforgettable cruising vacation, with everything you need right at your fingertips.

4. The spa is certainly impressive

The spa aboard Norwegian Escape really pulls out all the stops. There are two dozen treatment rooms within the spa, and an expansive spa treatment menu that even includes treatments that are suitable for kids and treatments that family members can enjoy together. When you’re not enjoying a treatment, you can take advantage of the spa’s various relaxation spots, such as the thermal suite, which is outfitted with a thalassotherapy pool, heated lounge chairs and a hot tub.

Plus, there are floor-to-ceiling windows for great views of the water while you kick back and relax. Things getting a little too heated for you? The spa also boasts Norwegian’s first snow room, where guests can relax post-sauna in a 14-degree room that literally has snow falling from the ceiling.

5. The dining options are Iron Chef-worthy

The Norwegian Escape cruise ship features Food Network’s Iron Chef Jose Garces’s very first restaurant at sea. While it’s not incredibly out of the ordinary to find celebrity chef-endorsed restaurants at sea (restaurants by Guy Fieri and Tyler Florence both come to mind), it is somewhat unique to find an eatery helmed by an Iron Chef himself.

The restaurant is called Bayamo and is a Pan-latin restaurant with a delicious seafood-heavy menu that’s sure to impress any traveling foodie. If you don’t want a full, sit-down experience, though, you can grab a quicker bite at the restaurant’s sister, Pincho Tapas Bar, also helmed by Jose Garces.

6. Things can get loud — but they’re always exciting

Don’t get us wrong. There are plenty of places to relax when you’re aboard a Norwegian Escape cruise (such as the spectacular spa or some of the spots in the VIP Haven). However, overall, this family-friendly, entertainment-heavy ship is filled with buzzing activity, all the time. So, expect things to get a little loud. However, that noise just means you’re either having a great time, or you’re about to have a great time.

7. Not everything is included in your cruise fare

As you’re reading this article, you’re likely coming up with tons of things you want to see and do during your Norwegian Escape cruise, but keep in mind — not everything is included in your cruise fare. Things that are included? Your meals at select restaurants, including the main dining rooms and buffet; theater shows; access to the AquaPark; access to the Spice H20 adults-only deck; access to the fitness center; and most daily activities.

Things that aren’t included, however? Gratuities, beverage and spa tips, spa treatments, shore excursions, WiFi, late night babysitting and special activities. Just keep this in mind as you plan out what you want to do and see during your Norwegian Escape cruise.

Also Read: 16 Reasons You Should Cruise on Norwegian Bliss

8. There are tons of dining options to choose from

Seriously, you will never go hungry aboard a Norwegian Escape cruise. There are so many different options to choose from, more than two dozen free and for-a-fee restaurants, across a range of different cuisine types. If you can think it, it’s likely you can find it to eat and enjoy during your cruise.

There is, of course, the main dining room, which offers a traditional cruise dining room feel and experience. Expect a rotating selection of international cuisine, with three courses at lunch and dinner. The Garden Cafe is a huge buffet, with just about everything you can imagine available to eat (just keep in mind this free eatery can get busy; everyone wants to give it a try!).

Other popular places to grab a bite include Margaritaville at Sea, for a Jimmy Buffet-inspired experience and plenty of margaritas and cheeseburgers in paradise; Teppanyaki, a reservations-required restaurant serving Japanese hibachi fare; Le Bistro, an upscale French eatery; The Supper Club, for a dinner theater-style experience; Cagney’s Steakhouse, for traditional steakhouse fare and outdoor seating; Moderno Churrascaria, a Brazilian steakhouse; Food Republic, easily one of the best eateries aboard the ship, offering Asian cuisine; and District Brew House, a gastropub.

However, this only scratches the surface of the eateries available aboard Norwegian Escape. There’s still more to try!

9. The theater performances are top-notch

Norwegian Cruise Line is known for having some of the most high-quality theatrical performances at sea. When you’re aboard your Norwegian Escape cruise, you’ll enjoy shows at the two-deck Escape Theater, as well as several other venues. Broadway-style shows abound, as do comedies and musicals. You’ll want to make reservations for the shows, but do note that attendance is free.

10. There are plenty of spots to take a dip

While some older cruise ships only offer one main swimming pool, that’s not at all the case when you’re aboard Norwegian Escape. There are three swimming pools in total. There’s a main pool with two hot tubs; a smaller pool with a waterfall that’s more kid-friendly; and then a separate, VIPs-only pool within The Haven.

A hydrotherapy pool is in the spa, but you have to be signed up for a spa pass to access it. There’s also a walk-through grotto on Spice H20, the adults-only deck that provides a place for adults to find a bit of peace and quiet away from the screaming, splashing kids, but it’s not really a pool, so much as just a place to wade and chill out.

If you’re traveling with kids, you won’t have to worry about keeping them entertained whatsoever. Norwegian Escape has plenty of kids activities and fun kids programming that parents can feel good about.

So, drop the kids off into the staff’s well-qualified hands and know that everyone’s going to have a great time during your cruise. Programming is available for all ages, from toddlers to teens, with activities that are well suited to each age group, from sensory play for the smallest children to appropriately chaperoned parties for the teens.

12. Leave something at home? You won’t be left wanting

Yes, Norwegian Escape offers plenty of fun at every turn, but they’ve also thought of all the little details that you might need that will make your cruise more comfortable. For example, there’s an internet cafe, where you can access WiFi from a computer, so you’re not stuck trying to check email on your slow phone.

There’s laundry service, in case you have a spill and really want your favorite shorts ready for the next day. Shops additionally sell snacks, toiletries and other items in case you accidentally left something at home.

13. There are plenty of different cabin options for you to pick from

If you’re a traveler who likes a lot of different options, you’re in luck when it comes to picking your cabin aboard Norwegian Escape. There are so many different ways to stay. You can pick from a ton of different room categories, including inside cabins, studio cabins, ocean-view cabins, balcony cabins, mini-suite cabins, full suites and spa suites.

There are accessible versions of cabins available and, if you’re traveling as a family, you’ll easily find accommodations options that can fit the whole crew, including connecting rooms, ocean-view cabins that fit five and family villas that fit six.

Ready to book your Norwegian Escape cruise? We wouldn’t blame you. There’s so much to do, see, enjoy and explore while aboard this Breakaway Plus-class ship that it’s honestly hard to fit it all into one trip! It all starts, though, with your first.

When was NCL Escape refurbished?

Since Norwegian Cruise Line’s Norwegian Escape ship is relatively new (it launched in 2015), it has not yet received any refurbishments or dry dock periods. You can expect top-tier technology, stylish staterooms and state-of-the-art amenities on this ship, thanks to its young age and the care that Norwegian Cruise Line obviously took while creating one of its very first members of the Breakaway Plus Class.

What class ship is the Norwegian Escape?

How many pools does the Norwegian Escape cruise ship have?

The Norwegian Escape cruise ship has several different pools. There’s a main pool with two hot tubs; a smaller pool with a waterfall that’s more kid-friendly; and then a separate, VIPs-only pool within The Haven. A hydrotherapy pool is in the spa, but you have to be signed up for a spa pass to access it.

How large is the Norwegian Escape? 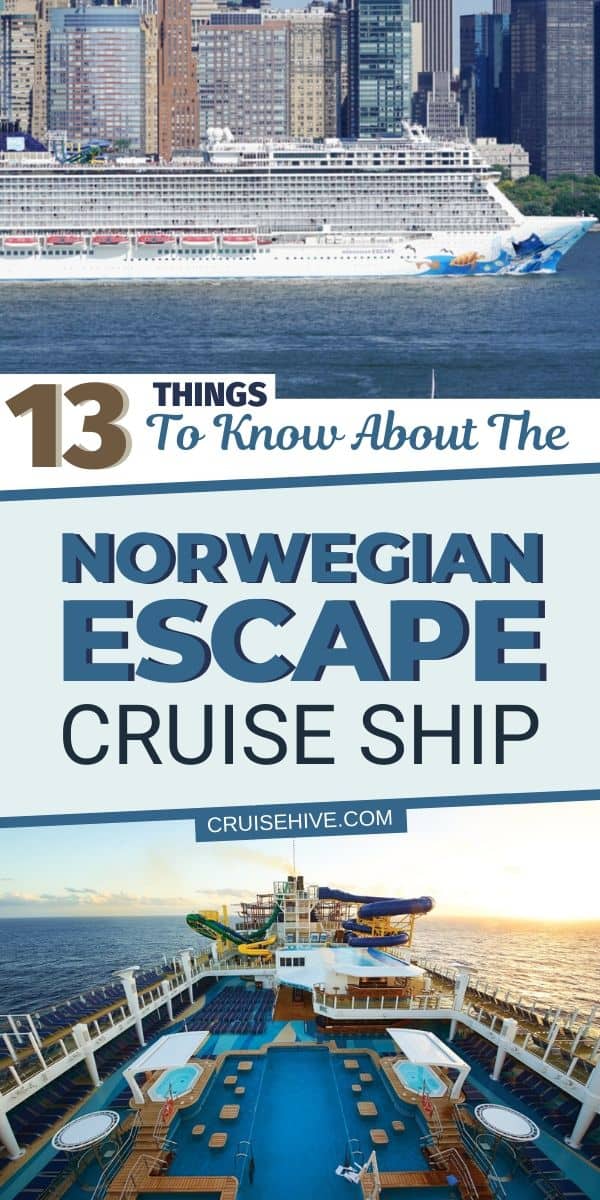