Everything you need to know about Royal Caribbean's Voyager of the Seas, the first in her class with plenty to do during the cruise.

Royal Caribbean’s Voyager of the Seas cruise ship is slightly on the older side. Launched in 1998, she’s been sailing the high seas for more than 20 years, and delighting cruisers all the while.

At construction (which occurred in Turku, Finland), the ship cost a whopping $650 million to build, giving cruisers at the time a wealth of luxury — but how does it all hold up today? Is Royal Caribbean’s Voyager of the Seas cruise ship still impressing intrepid cruisers the world over? Or has this ship certainly seen better days?

If you’re considering a Voyager of the Seas cruise, you’ll want to learn a little more about the ship and what it offers before making your final decision. One thing’s for sure — the ship does still certainly have lots of character and plenty of offerings, thanks to multiple dry docking sessions and the ship’s overall size and class. Whether or not Voyager of the Seas is a good fit for your family, though, will be up to you.

Here are 10 things to know about Royal Caribbean’s Voyager of the Seas.

1. Voyager of the Seas was, at one point, the largest ship in the world.

2. Voyager of the Seas has undergone multiple refits and refurbishments.

Over the course of multiple dry docking periods, Voyager of the Seas has been updated, primed and pruned to best fit current cruiser and traveler needs.

The ship’s first major refit occurred over the course of October and November 2014, during which the ship received the popular FlowRider surfing simulator feature, as well as an outdoor movie screen that replaced an in-line skating track.

A larger refit occurred in 2019, to the tune of $97 million. That refit added more than 70 new passenger cabins to the ship, as well as some water slides. Most recently, in January 2020, the ship received additional refurbishments, with ice rink and water slide updates.

3. Voyager of the Seas is well-suited to families and those looking for endless entertainment.

Voyager of the Seas offers something for everyone in the family. Top attractions aboard the ship include the very family-friendly water features, such as the FlowRider surf simulator and The Perfect Storm water slides, as well as the other active options, like the ice skating rink, laser tag arena and full basketball court.

For families with younger children, the other pool areas are fitting. For older members of the family, sun decks, dining options, bars and lounges and shopping abound.

4. Cruisers get a lot for their money.

When cruising aboard Voyager of the Seas, you can be assured that you’ll get a lot for your money. There’s no need to splurge to have a good time.

Complimentary inclusions within your cruise fare include all your dining at the ship’s main dining rooms and the buffet, as well as a few select other options. You get free access to the main theater shows, as well as daily activities hosted by the lively crew.

You can also enjoy getting your sweat on at the sports court, skating rink, all of the water features, the gym and even the rock climbing wall. Parents will appreciate the complimentary inclusion of the Kids Club programming for cruisers ages three to 17, and last, but certainly not least, depending on where you’re cruising from, you may even be able to get your gratuities included in the cost of your cruise.

Really, the only things you’re missing that you might want to pay more for include the for-a-fee dining options, as well as specialty services like spa treatments and fitness classes, or shopping and babysitting. WiFi is also an added cost.

5. For-a-fee dining aboard Voyager of the Seas includes all the Royal Caribbean favorites.

Each cruise line comes with its tried and true dining options. They’re the restaurants that you can always rely on, no matter which ship you’re aboard. The cruise line just adds these basic eateries to each of their ships, because cruisers have come to love them so much.

That’s exactly the case with the for-a-fee dining aboard Voyager of the Seas. If you’re a long-time Royal Caribbean fan, you’ll find all your favorite restaurants, both newer offerings and classics.

6. There are near-endless spots to grab a drink, across the ship’s multitude of watering holes.

Thirsty? You won’t be for long, when you’re aboard Voyager of the Seas. The ship offers plenty of spots to have a cool, adult beverage.

Check out The Tavern, more sports bar than actual tavern; Schooner Bar, a Royal Caribbean favorite piano bar; R Bar, a more high-class watering hole catering to small crowds; Pig & Whistle, a British-style pub; Diamond Club, the Royal Caribbean VIP lounge; Star Lounge, a live music venue; Windjammer Bar, an offshoot of the buffet; Sky Bar, which overlooks the pool; the Viking Crown Lounge, for amazing views of the ocean and a club-like feel after dark; and the Suite Lounge, for suite guests only. There are also bars off the pool and off the adults-only solarium.

7. Soaking in the sun is just as easy as stepping outside.

Don’t worry about roaming the interior halls of a cruise ship looking for daylight. You can find tons of spots to soak in the sun while aboard Voyager of the Seas.

The ship boasts three different swimming pools, as well as six hot tubs. There’s an additional adults-only pool in the Solarium, along with two hot tubs. The Solarium is a great spot to get away from the crowds and noise that can sometimes surround the main pool areas and the waterslides.

Speaking of, there are more than just pools when it comes to getting your hair wet. You can also enjoy two racing waterslides, as well as the FlowRider, which allows cruisers to try their skills at surfing or bodyboarding.

For those who prefer not to get wet, they can catch some rays on one of the many sun decks. Check out the cabanas on Deck 11, or the loungers and sun chairs that are located on Decks 12 and 13.

Want to get a little sporty (and maybe a little sweaty)? Try one of the outdoor, sun-drenched sports courts, or the rock climbing wall.

8. Voyager of the Seas offers all the health and beauty amenities you could need.

While it’s true that this Royal Caribbean ship caters highly to cruising families, if you’re a cruising couple or a single, or even just a parent looking for some alone time, you’ll be glad to know that Voyager of the Seas offers plenty of health and beauty amenities and the spaces to enjoy them amidst some peace and quiet.

Check out the Vitality Spa on Deck 12, where you can book just about any spa treatment imaginable, from a massage to a facial. The spa also has its own salon, for manicures, pedicures, hair treatments and cuts, shaving and even lash services. The only downside? Unlike many other Vitality Spas across Royal Caribbean’s fleet, Voyager of the Seas’ spa does not have its own hot tub or thermal room.

As for fitness, you’ll also find the ship’s gym on Deck 12, outfitted with all the various workout equipment that you could need. While select classes and gym usage overall are free, you can also find paid classes.

9. The childcare and children’s programming are top-tier.

Royal Caribbean is renowned for its children’s programming, and you should expect no less than the best from the brand when you cruise aboard Voyager of the Seas.

Your children, from three years old to 17, can enjoy programming built to their specifications, to meet their individual needs — educational and social. The younger kids enjoy the Adventure Ocean space, with dedicated areas for each age group and activities led by trained childcare staff. Some of the activities for the younger kids allow parents and family members to participate, too, so it’s not like you’re just dropping your child off and heading out to do your own thing the entire cruise.

The teen hideaway is dubbed “The Living Room” and comes with cool gaming consoles, many hangout areas for socializing and even its own sundeck. Teens will also like the range of events specially catering to them, such as parties and games.

The majority of the children’s programming is free, but select services, such as late-night babysitting, do come with a fee.

10. Voyager of the Seas is the first member of Royal Caribbean’s Voyager class.

Do certain aspects of this ship sound familiar? If you’ve cruised with Royal Caribbean before, then you may have cruised on one of Voyager of the Seas’ sister ships in the Voyager class (which will give you a pretty good idea of what to expect from the ship). All Voyager-class ships have very strong similarities.

Also Read: 9 Things to Love About Royal Caribbean’s Liberty of the Seas

Voyager of the Seas FAQ:

How many swimming pools are on Voyager of the Seas?

The ship boasts three different swimming pools, as well as six hot tubs. There’s an additional adults-only pool in the Solarium, along with two hot tubs.

How long is Voyager of the Seas?

What other ships are the same as Voyager of the Seas?

How large is the Voyager of the Seas cruise ship? 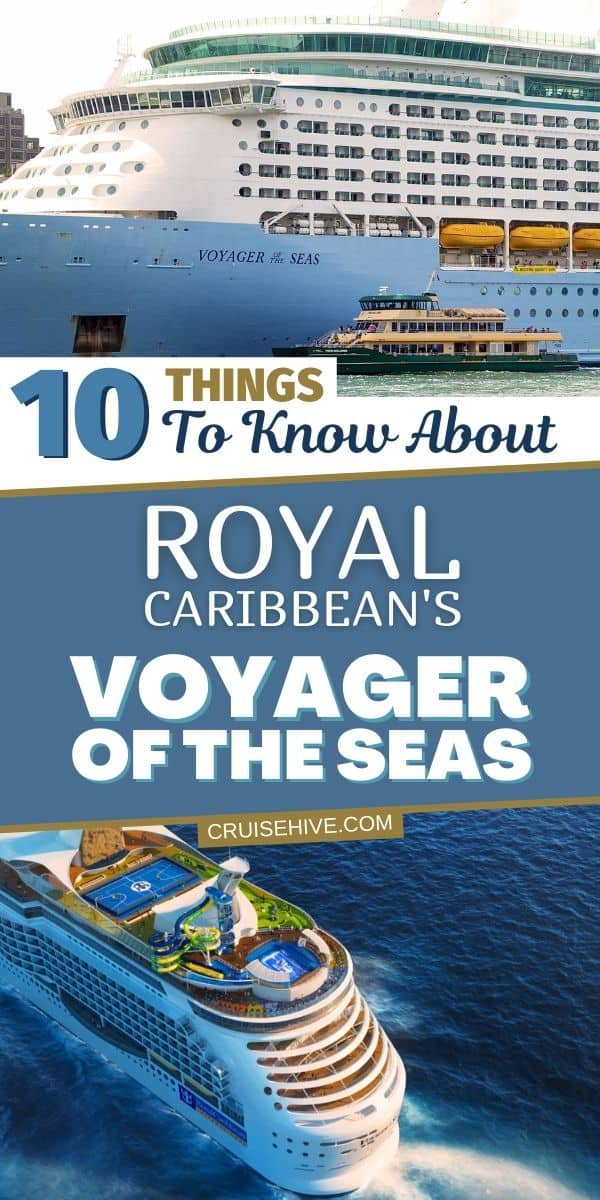