Check these things to know about Royal Caribbean's Explorer of the Seas which is part of the Voyager-class of cruise ships.

Built-in Finland, Explorer of the Seas impressed cruisers in the early 2000s with its many amenities and its state-of-the-art atmospheric and oceanographic laboratory operated by the Rosenstiel School of Marine and Atmospheric Science at the University of Miami (which is now defunct) — but can it still impress cruisers today?

The ship has sailed all over the world and, while doing so, has picked up a few improvements. Major upgrades occurred in early 2015, which increased the tonnage to what it is today with the swapping out of the ship’s prior inline skating rink with the Royal Caribbean cruiser favorite, the Flowrider surfing simulator.

Most recently, though, the ship was set to undergo an even more expansive $110 million makeover. However, due to the global health crises the lavish upgrade was cancelled and only a more limited technical update is being done.

So, can Explorer of the Seas still impress cruisers today? You’ll have to judge for yourself, but we think it still can. However, before you book a cruise on this magnificent ship, you’ll want to learn everything about it that you can. So, without further ado, here are nine things to know about Royal Caribbean’s Explorer of the Seas.

1. The ship’s top deck gives you that beach resort feel, even when you’re miles away from the nearest beach.

One of the coolest things about Explorer of the Seas is the top deck space that really makes this area of the ship feel like a posh resort in the Caribbean or Mediterranean, without making it feel overly stuffy at the same time (in other words, there’s still plenty of fun to be had).

There’s so much to do and see over the ship’s top decks now, in addition to the attractions already there, such as the FlowRider surf simulator and the Sports Court with its basketball, soccer, volleyball, rock climbing and miniature golf.

So, what can you expect?

When you step out on Explorer of the Seas’ top deck, you would have seen The Perfect Storm, aka, Royal Caribbean’s popular, cruiser favorite duo of waterslides. The waterslides are called Cyclone and Typhoon and they’ll certainly make your heart drop as you go racing through the three stories of slide. These will hopefully be added in the near future.

Then, for those who want to just relax, there’s the resort-style sunning areas, with lots of cool seating, from daybeds to hammocks, in-pool loungers to casitas. Adults can get away from the kids by escaping to the adults-only Solarium.

2. The new planned dining options will be top-notch.

Along with the outdoor attractions, the most recent planned 2020 renovations were to add some awesome new dining options to the Royal Caribbean Explorer of the Seas cruise ship. Some of these are already well known to cruisers who frequent Royal Caribbean ships and itineraries.

Other spaces to look forward to in the future is Giovanni’s Italian Kitchen, a new signature Italian restaurant, with lots of pizza, pasta, charcuterie and Italian wines. The Playmakers Sports Bar & Arcade is a space filled with TVs, all showing your favorite teams, while the bar serves up classic bar snacks and brews. Games are also on tap, from trivia to billiards. And, at Johnny Rockets Express, you get that favorited Johnny Rockets atmosphere right by the pool, including delicious, frosty spiked shakes.

The new amplifications which could still go ahead in the future also included the addition of a standalone Starbucks coffee shop, so you can get your Starbucks fix no matter how far from home you may be.

While everyone loves a little alone time during the cruise (and this cruise ship certainly allows for that, with kid-only and adult-only spaces that are sure to please), it’s also good to come together as a family every once in a while.

You can do that with some of the new features aboard the Royal Caribbean Explorer of the Seas cruise ship, such as the glow-in-the-dark laser tag arena, that just debuted in Studio B (which before also offered ice skating and ice shows). The laser tag arena pits teams against one another, in a snowy atmosphere featuring yetis and mysterious snowshifters.

4. Royal Caribbean offers only the latest and greatest for younger cruisers.

It’s true — kids really can be the biggest critics. And that’s exactly why Royal Caribbean has put a lot of thought and care into the spaces and places where kids are most likely to hang out during a cruise. Some of the most recent amplifications transformed Royal Caribbean’s award-winning kids program, Adventure Ocean, as well as the teens-only spaces.

Now, kids ages six to 12 will enjoy an imaginative, open space with lots of immersive activities, while those ages three to five will enjoy other specially designed spaces. The teens, meanwhile, get a whole new look and feel in their space, including their own private, outdoor deck, while still enjoying the latest movies, gaming and music.

5. The ship’s classic dining offerings are just as can’t-miss as the newer restaurants.

While you definitely will want to check out the cruise ship’s newer restaurants that were just added, still make time in your schedule for the classic, complimentary dining options that Royal Caribbean fans rave about.

Complimentary dining includes the classic, sit-down dining experience in the ship’s main dining rooms, something you’ll want to try a few times if you’re a first-time cruiser. The three-level, formal main dining room offers an atmosphere that you certainly won’t forget. Then, additionally, there’s the Cafe Promenade for 24-hour light fare and the Windjammer Marketplace buffet (another must-try if you’re a first-time cruiser).

Fee dining above and beyond the newer restaurants that were added include Chops Grille, Royal Caribbean’s signature steakhouse (with plenty of seafood on the menu as well); Johnny Rockets, a full-size version of the classic diner as opposed to the new Johnny Rockets, which is just an express version of the real thing; and Izumi, an a la carte sushi eatery.

Of course, you can also order room service, which may be a fun experience for first-time cruisers as well, as you sit back in bed and enjoy your breakfast alongside some stellar views of the ocean. What’s not to love?

6. There’s entertainment and fun to be had at every turn.

The Royal Caribbean Explorer of the Seas cruise ship packs in the fun for every cruiser, whether you enjoy some soaking good fun at the pool, or something a little more refined at the theater. Plan a mix of entertainment into your trip itinerary, to try a little bit of it all.

The ship’s Palace Theater is the main lounge and the spot where 1,350 of your fellow cruisers pack in to check out the Broadway-style shows and headliners. When not acting as a fun, family-friendly laser tag arena, Studio B is a space for wonderfully choreographed ice skating shows, as well as open ice skating time if you feel the need to don your own skates.

If you want to get in on the entertainment versus just watching it from your seat, that’s a possibility too, thanks to the very involved Royal Caribbean staff who go out of their way to plan fun activities for cruisers, from towel folding demonstrations to table tennis tournaments. You can also find lots of educational (yet still fun) activities, like art auctions and ballroom dancing lessons.

7. The on-ship nightlife is just as impressive as what you might find in your favorite on-land locale.

Think you can only enjoy a good nightlife experience while in an urban hub or at your favorite international destination? Think again. Royal Caribbean has packed its ships, including Explorer of the Seas, with plenty of nighttime fun, so you can bar hop or lounge lurk as much as you want.

There are a whopping 13 bars and lounges aboard this ship, including a piano bar, sports bar, English pub, dance club, cigar club, cocktail bar, pool bar, adults-only pool bar, 24-hour bar, jazz club and more. Some are available only to cruising VIPs, but most are open to all.

And if that’s not enough to fill your nightly card, you can also attend one of the deck parties, where DJs spin favorite tunes under the stars, or you can try your luck at the casino, where you’ll find 300 slot machines and nearly 20 table games.

8. Working off some calories is easy and fun.

Okay, so with all the eating and drinking you’re going to be doing aboard this ship, you’re bound to pick up a few extra calories here and there, no matter how hard you try to avoid them. Thankfully, Royal Caribbean makes it easy to work those calories off, with lots of ways to work up a sweat while having a great time in the process.

The deck area features lots of active entertainment, from the 200-foot rock climbing wall to the full basketball and volleyball courts. A jogging track goes around the sports deck, so you can get in a run while enjoying the views. Want to try a new sport? Cricket is also available.

9. Getting away from the crowds is easy, too.

Need a little respite from both the sun and your fellow cruisers? There are a few spots on this ship where you can easily escape from the noise and hubbub. Just head to the library on Deck 7, which is open 24 hours a day, or the Skylight Chapel, on Deck 15, which also happens to be the highest point on the cruise ship.

Also Read: 9 Reasons to Cruise on Royal Caribbean’s Anthem of the Seas

Explorer of the Seas FAQ:

How big is Explorer of the Seas?

What other ships are the same as Explorer of the Seas?

The Royal Caribbean Explorer of the Seas cruise ship is a member of the Voyager class. It was the second Voyager-class ship to premiere, in 2000.

How many pools are on the Explorer of the Seas cruise ship?

Explorer of the Seas offers guests three pools and six whirlpools, including an adults-only pool in the Solarium. There are additional water activities including two water slides and a FlowRider surfing simulator. 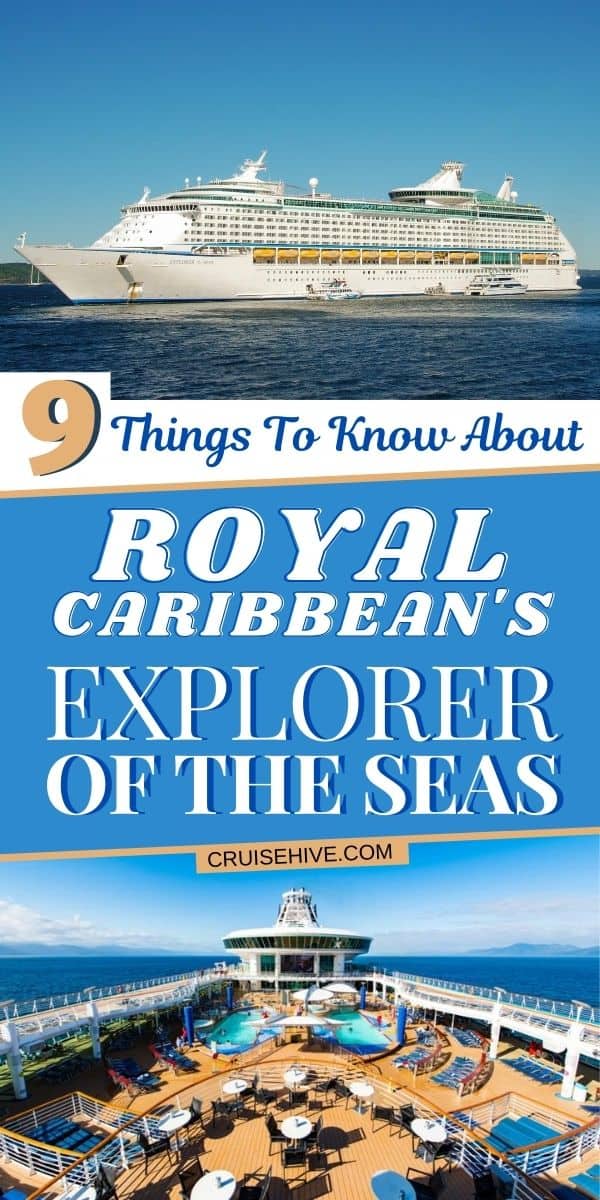