9 Things to Do on the MSC Divina Cruise Ship

All the things to do on the MSC Divina cruise ship which is operated by MSC Cruises. With ship features, statistics, and tips.

Since the cruise ship’s christening by actress Sophia Loren (for which the ship was named, at Loren’s behest), it’s traveled a range of itineraries in both the Eastern and Western Hemispheres, ferrying travelers around both the Caribbean and Mediterranean Seas.

The MSC Divina has a few various eco-friendly features. It houses its own sea water distillation plant, where the ship and crew can produce any fresh water needed, without having to take water from its cruising destinations. Additionally, the ship’s evaporators and reverse osmosis plants that it uses for this feature are pollution-free, making use of a heat recovery system for power.

Despite things like this, though, the MSC Divina cruise ship has made headlines for air and noise pollution. Immediately after its launch, the MSC Divina was accused of creating air pollution in Venice, with other accusations stating that the ship’s wake and noise levels could damage Venice’s historic canals and the buildings along them. This incident would follow MSC Divina well into the future, as in 2017, five years later, the ship was featured in an exhibition on the harms cruise ships have brought to the city of Venice.

Whatever your feelings are on cruise ships and historic ports, you can have an amazing time on the MSC Divina alone, without ever even leaving the ship. Regardless of itinerary, ports you stop at or don’t stop at, the ship itself provides an array of entertainment, elegant experiences, opportunities to relax and indulge, and more.

If you’re thinking of taking your first cruise aboard MSC Divina, then you can start planning your itinerary now, with these nine best things to do on the MSC Divina cruise ship.

1. Escape to an exclusive ship within the ship

First things first, there’s nothing wrong with the wonderful staterooms you can book for a lower fare aboard MSC Divina, but if you want to really upgrade your experience, it’s just as easy as booking a stay within the MSC Yacht Club, a haven that really is a ship within a ship.

You’ll have access to luxurious suites, 24-hour butler service, concierge service and more. Yacht Club guests enjoy access to public areas that other cruisers don’t, such as the Top Sail Lounge, with perfect views, and the One Pool Deck, with a private pool, hot tub and bar.

Even the furnishings within the Yacht Club suites are different, more luxurious and over the top. Cruisers enjoy Egyptian cotton sheets, superior mattresses and pillows, panoramic views, big entertainment areas and more.

The best place to stay in probably the entire ship, that’s also situated within the Yacht Club? The Sophia Loren Royal Suite, which was, as you probably guessed, designed by the ship’s godmother. The suite’s most special feature is the replica of Loren’s own dressing table.

All cruise lines offer a range of daily activities, both complimentary and for a fee, but cruisers seem to particularly enjoy the daily activities offered up aboard MSC Divina. You can, of course, get in on the daily games and workshops, but don’t miss the special MSC Cruises Winery at Sea program, where participants create their own wine blend and enjoy a few sips.

Nighttime activities are particularly notable, as themed events reign supreme after the sun goes down. Don your favorite black and white apparel for a black and white party, or throw on your favorite, red, white and green attire for an Italian-themed event (it is an Italian cruise line, after all). Things take a while to die down aboard the ship, with activities lasting well into the late night hours.

Seeing a show while aboard a cruise is practically a required activity, but you’ll find it’s a bit different on MSC Divina than what you might see on an American cruise line. The ship’s shows are music, dance and acrobatics-focused, though you won’t find the Broadway inspiration here that you might see on other cruise ships.

Since the ship does cater to quite a few European travelers, you can expect to find ballet, opera and French cabaret-inspired acts. Just show up at the theater and see what’s on the schedule for the day! You might be surprised at how much you enjoy the day’s shows.

If you’re going to be in a warm destination, you’ve got to spend a little bit of time soaking up the sun by the pool.

The cruise ship’s main pool is on Deck 14. This Aqua Park offers a large saltwater pool, some kiddy pools and two hot tubs. Beyond the pools themselves, the area is definitely crammed with lots to do in terms of activities. You’ll find daily games taking place at the Aqua Park on a regular basis, as well as themed parties at nights, karaoke and movie showings.

Another pool can be found further along Deck 14. Le Sirene is an outdoor area that offers a covered pool, though sometimes the cover is removed. There’s a freshwater pool and three hot tubs.

Yet another pool is one deck up, on Deck 15. The Garden Pool is adults-only, which is a nice feature, giving you a quiet spot to relax in the single, infinity-style saltwater pool.

Lastly, a private pool is reserved for Yacht Club passengers on Deck 18.

A water slide is also featured on the ship, running between Decks 16 and 15. A separate sun deck is on Deck 18, with two hot tubs, though no pool; this sun deck is an adults-only space with a bar.

MSC Divina doesn’t have the same party atmosphere that you might see aboard an American cruise line, but that doesn’t mean that the drinks aren’t flowing. You can find a plethora of bars and lounges aboard MSC Divina, with one just around just about every corner.

There’s the Divina Bar in the atrium, a relaxed space with calming music; the Silver Lounge, where you’ll find fewer crowds; the Cigar Lounge, with a humidor; the Black & White Lounge, one of the most popular bars on the ship; the Golden Jazz Bar, another very popular spot, with live music; La Luna Piano Bar, with a martini menu and live piano music; the Sports Bar, with lots of television and greasy bar food; La Cantina di Bacco, a wine bar-meets-pizzeria; Poseidon Bar and Tritone Bar, two separate venues both by the main pool and Aqua Park; The Garden Bar, next to the Garden Pool; and the Galaxy Disco Bar, which is a huge club-like space.

6. Grab a bite to eat at one of the several complimentary dining options

There are two main dining rooms that offer you the classic, upscale, sit-down dinner service that, if you’ve done any cruising in the past, you likely already know and love, for the most part. These two main dining rooms are Black Crab and Villa Rossa, and both serve the same menus at the exact same times. When you board, you’ll be assigned your dinner seating time. The menus are pretty basic, but very European in style.

Calumet and Manitou Buffets are the buffet options aboard the ship (another cruising must-experience). The buffets are, frankly, humongous, and they serve, again, many European favorites. You’ll find some American eats for offer, but you’ll find the quality is lacking compared to the European fare, so that’s really the way to go.

Otherwise, your complimentary dining options only expand if you book a Yacht Club cruise, at which point you additionally have access to the Top Sail Lounge, with its buffet of snacks; Le Muse, an upscale restaurant; and One Pool Bar and Grill, at the Yacht Club guest-only pool.

You will, though, discover by wandering the ship, that there are some snacks available at various venues throughout the day, and room service is an additional option.

7. Upgrade your dining experience for even more options

While you may not want to eat at one of the for-a-fee restaurants every single day of your cruise, it’s worth trying out a few of them. In particular, guests love the three restaurants helmed by popular Italian eats brand, Eataly. The Eataly Steakhouse offers a similar experience to what you might find at Eataly locations across the United States. Eataly also helms the Ristorante Italia, which is a little more upscale, and then additionally La Cantina di Bacco, a pizza and wine bar.

Other than Eataly-approved dining experiences, you can find extra eats at the Sports Bar, Galaxy Disco Restaurant and even a cute little Nutella cart, serving Nutella-stuffed crepes.

8. Enjoy a bit of indoor fun

If it’s just too hot outside and you’ve already sweat enough for one day, you can enjoy a bit of indoor fun aboard MSC Divina as well. The ship boasts an arcade, called Virtual World; an F1 Simulator; art gallery; casino; and a cyber cafe, in case you want to check your email without signing up for a pricey WiFi plan.

Lastly, after all that fun, you’re going to want to relax a little bit, so head to the MSC Aurea Spa on Deck 18. You’ll enjoy open air treatments, sunning on the dedicated deck, great views of the ocean, a full range of spa treatments and a separate bar and snack menu for spa patrons.

Does the MSC Davina Sound Like the Perfect Fit For Your Next Cruise?

If so, stop waiting around and book your MSC Davina cruise the next time the ship sails to your neck of the woods. A ton of fun, a unique European experience and more await.

How many swimming pools are on MSC Divina?

There are four total pools on MSC Divina. The main pool and Aqua Park is located on Deck 14, alongside some kiddy pools and two hot tubs. Le Sirene is a covered freshwater pool also on Deck 14, with three hot tubs.

How large is the MSC Divina cruise ship?

The MSC Divina cruise ship is pretty big, weighing in at 1394,00 gross tons, just a little over 20,000 gross tons smaller than MSC Cruises’s current largest ship, MSC Seaview. MSC Divina can hold just over 3,500 passengers across its just over 1,500 cabins, with a crew of nearly 1,400.

The daytime dress code is casual. The evening dress code is resort casual, with women generally wearing casual dresses or blouses with slacks, while men wear slacks and button-downs. Formal nights require cocktail dresses and suits. In the evening, cruisers are not allowed to wear jeans, t-shirts or shorts in public areas. 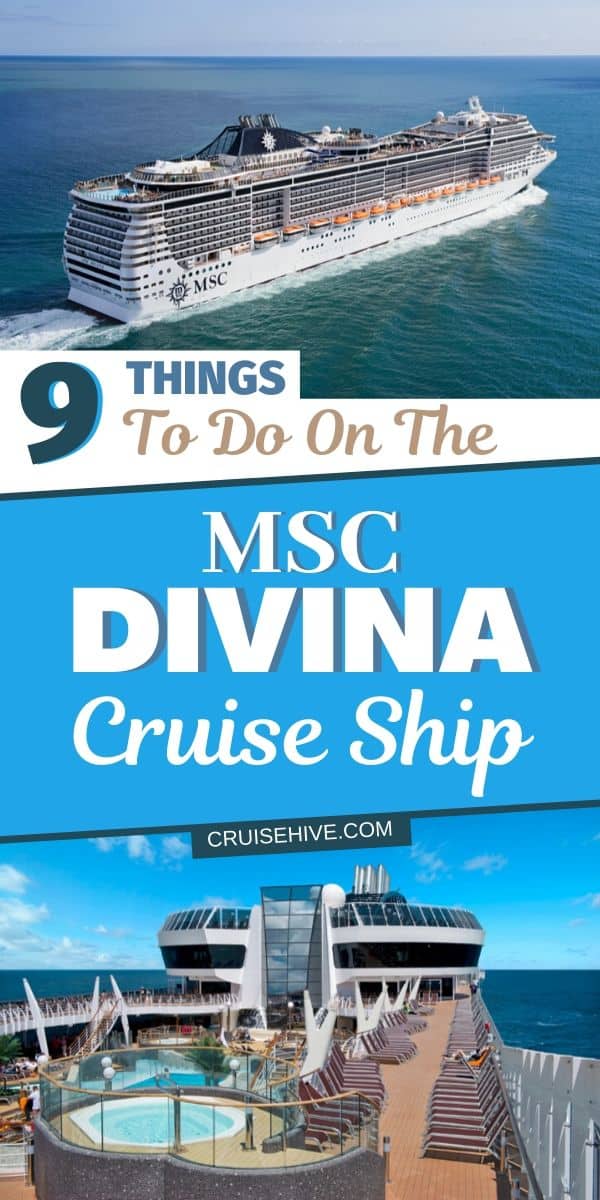