10 Things to Do on the Celebrity Eclipse Cruise Ship

Celebrity Eclipse cost a whopping $750 million to build, more than even Celebrity Silhouette, which followed Eclipse as the last Solstice-class cruise ship, by nearly $40 million. Despite this, the vessel is smaller than Silhouette, with a gross tonnage of 122,000 GT and double occupancy passenger capacity of 2,852 peoples plus crew members. The ship is 1,040 feet in length, with 17 decks. Crew members number 1,271 people.

Like its Solstice-class sisters, Eclipse was designed with efficiency, sustainability and eco-friendly cruising in mind (though do note that obviously the standards for green cruising has changed somewhat over the last decade). As such, Eclipse is outfitted with a photovoltaic system (think solar energy), an optimum hull design and coating and LED lights. The result is a ship that purportedly uses 70 percent of the energy comparable ships use.

Celebrity Eclipse boasts many of the features you would likely expect from a Celebrity Cruises ship, including multiple pools, a theatre, casino, shopping, top-tier restaurants and more. However, the ship was originally scheduled to undergo a dry dock in order to update all of its amenities and spaces in April 2020.

This dry dock was postponed thanks to the COVID-19 pandemic and its impacts on the cruising industry. Original refurbishment plans had included changing Michael’s Club to the Retreat Lounge and a sun deck, and redesigns to the buffet and wine bar. It’s now expected the dry dock will take place in March 2021.

Want to take a cruise aboard Celebrity Eclipse in the near future? Whether you cruise ahead of or after the scheduled dry docking period, there’ll be plenty for you and your fellow cruisers to enjoy. Here are 10 things to do on the Celebrity Eclipse cruise ship.

1. Hit up all the free dining options

If you know anyone who frequently cruses with Celebrity Cruises, then they’ve likely raved to you about the quality of the food aboard the ships. And they’re likely correct in their praises. Celebrity is known for putting food first on many ships, with top-notch culinary experiences available at a wide range of restaurants, both eateries included in your cruise fare and for a fee.

Additionally, the Celebrity staff plays a high level of attention to guests with dining restrictions, including those who follow vegetarian, lactose-free, gluten-free and low-sugar diets, so just about any cruiser can enjoy dining aboard Celebrity ships with ease.

Complimentary dining options include Celebrity Eclipse’s main dining room, which serves a huge amount of people in a light and airy atmosphere. The more formal dining atmosphere is nice without being overly stuffy and you can choose to make reservations for a sit-down dinner time, or you can also pop in anytime the dining room is open.

The Oceanview Cafe is the ship’s version of a traditional cruise ship buffet, with tons of options, ranging from American to international fare, pasta to pizza, sushi to Asian cuisine.

If you don’t want to step away from your fun at the main pool, you can grab grill bites at the Mast Grill (burgers, dogs, etc.), and if you want some quiet time in your stateroom, room service is also free except for during select late night hours.

If you were lucky enough to book a suite on this ship, then you’ll get some additional dining options at Luminae, which serves limited, fresh ingredient-focused menus; Blu, for multi-course dinners in a more upscale atmosphere; and the AquaSpa Cafe, for adults who visit the Solarium.

While some may shy away from booking for-a-fee dining experiences aboard a cruise ship, when it comes to Celebrity, the extra fees are often more than well worth it. There’s no worries about possibly being disappointed with a subpar meal.

One of Celebrity’s most well-known restaurants across its ships is Murano, a European-French restaurant serving a six-course tasting menu as well as an a la carte menu. For those who strictly want Italian fare, Tuscan Grille is another favorite, and aboard Eclipse, it provides great views. Qsine is a novelty, tech-centric dining experience with gourmet fare and four courses.

For more casual, for-a-fee dining experiences, you can check out Sushi on Five (suitably situated on Deck 5), which serves not only sushi but also noodle dishes (and you can order them to your state room!) or Cafe al Bacio & Gelateria, with lots of light snacks and sandwiches, as well as gelato.

3. Catch a show at the theater

You really can’t go on a cruise and not check out your cruise ship’s theater. There’s usually always something going on, no matter which cruise ship you’re on, especially if it’s during a sea day.

When sailing aboard Celebrity Eclipse, you’ll find that the theater offers more educational experiences during the day, such as lectures and cooking demonstrations, but then at night, the theater transforms into an entertainment wonderland with circus-style shows including acrobatics, choreographic, magic and more.

4. Immerse yourself in the daytime fun

If you want to be entertained non-stop, a cruise ship is where to find that non-stop entertainment, especially Celebrity Eclipse. The staff works tirelessly to provide cruisers of all ages and interests with a range of activities and fun to keep them happy and amused during their sailing.

You can take a class on all kinds of topics, from technology to dance, a foreign language to a favorite craft. Game shows are on schedule for those who want fun only, no education during their vacation required. Trivia and bingo are just two types of daily games where cruisers can easily get into the fun.

Tastings, art auctions, exhibits and more can all be found scattered throughout the ship’s many decks.

Just as Celebrity Eclipse offers a range of restaurants to suit every taste, every cruiser will find a range of bars and lounges to suit their preferences as well. Make sure to try them all during your cruise!

Passport Bar serves up craft beers near the atrium, making it a convenient stop no matter where you’re headed on the ship. The Martini Bar is, of course, a martini bar. You can even order a martini flight! Cellar Masters is a wine bar, which is served via wine dispensers rather than bar tenders in the evening. Quasar is a disco with live music. The World Class Bar serves craft cocktails.

Ensemble Lounge provides lots of seating, classic cocktails and live music. Michael’s Club (which is due for removal in 2021) currently offers men’s club-style service to VIP guests. Slush is a frozen cocktail stand near the pool. Sunset Bar is an open-air bar with great views. Lastly, the Sky Observation Lounge mixes equally great views with live music and a spacious dance floor.

Obviously you can’t go on a cruise without checking out your cruise ship’s pool.

Celebrity Eclipse’s main pool sits on Deck 14. You’ll find a family-style pool with more shallow areas for kids, a sports pool for rowdy water games and a wet zone with sprinkles and other water features that kids love. There are four hot tubs.

Adults who want to get away from the kids and enjoy some quiet time in the water will want to go to the Solarium, which only permits those ages 16 and up. There’s a pool there, as well as two whirlpools.

7. Soak in the sun, whether you want to get lost in a good book or get in on the action

There are plenty of places to enjoy some time outdoors aboard Celebrity Eclipse, without ever donning your swimsuit or getting your hair wet.

At the Lawn Club, there’s an actual, living lawn with actual, living grass. It’s a fun spot to hang out, chill and enjoy the weather. The Lawn Club also features a bocce court and putting course. Other sports activities in other areas include basketball on the ship’s basketball court and ping-pong at a series of tables on Deck 15.

For simple lounging, you can find plenty of loungers around the main pool area on Deck 14, but you can also go to Deck 16 for a pure sun deck only, where the crowds are a little less intense during sea days.

Why not treat yourself while you’re on your cruise, with some spa treatments that will leave you feeling good as new?

Celebrity Eclipse’s spa services and experiences are created alongside the famed Canyon Ranch brand, known for its high-end, luxurious spa experiences in the southwest United States. The spa menu includes your typical massages, wraps, scrubs and facials, but you can also find medi-spa services like cosmetic injections and acupuncture, as well as some extra services like teeth whitening.

A hair salon is included in the spa, offering typical cuts, colors and styling, as well as beard trims.

There’s no pool in the spa, but you will find a sauna, steam room, rain shower and ocean views.

(Pro tip: Want some more affordable spa prices? Visit while your ship is in port, for budget-friendly deals on just about every single service.)

With all the eating and drinking that goes on aboard Celebrity Eclipse, you may find yourself feeling the need to visit the gym. Luckily for you, the ship’s fitness center is completely outfitted with the latest in fitness gear and machines. You can also find fitness classes focused on the basics, like yoga and pilates. Stretching classes are available for free in the mornings, but the other fitness classes aren’t too pricey as it is.

If you’ve always preferred running, walking or jogging to working out in the gym, visit the outdoor jogging track on Deck 14.

Lastly, you can’t forget the smallest travelers in your crew. They deserve to have just as much of a relaxing time on their cruise as their parents.

Celebrity offers a range of children’s experiences, with multiple kids clubs on Deck 15.

Activities range according to age, but you can expect plenty of playtime, movies, crafts and learning experiences for the younger kids, while the older kids’ experiences focus more on social time, the latest tech, video games, media and more.

How many pools are on Celebrity Eclipse?

What class ship is the Celebrity Eclipse?

Celebrity Eclipse is part of Celebrity Cruises’ line of Solstice-class cruise ships. Sister to Celebrity Solstice, Celebrity Equinox and Celebrity Silhouette, the ship is still relatively young (on the global stage of cruising, that is), sailing for just over a decade.

How large is the Celebrity Eclipse cruise ship?

Celebrity Eclipse touts a gross tonnage of 122,000 GT and double occupancy passenger capacity of 2,852 peoples plus crew members. The ship is 1,040 feet in length, with 17 decks. Crew members number 1,271 people. 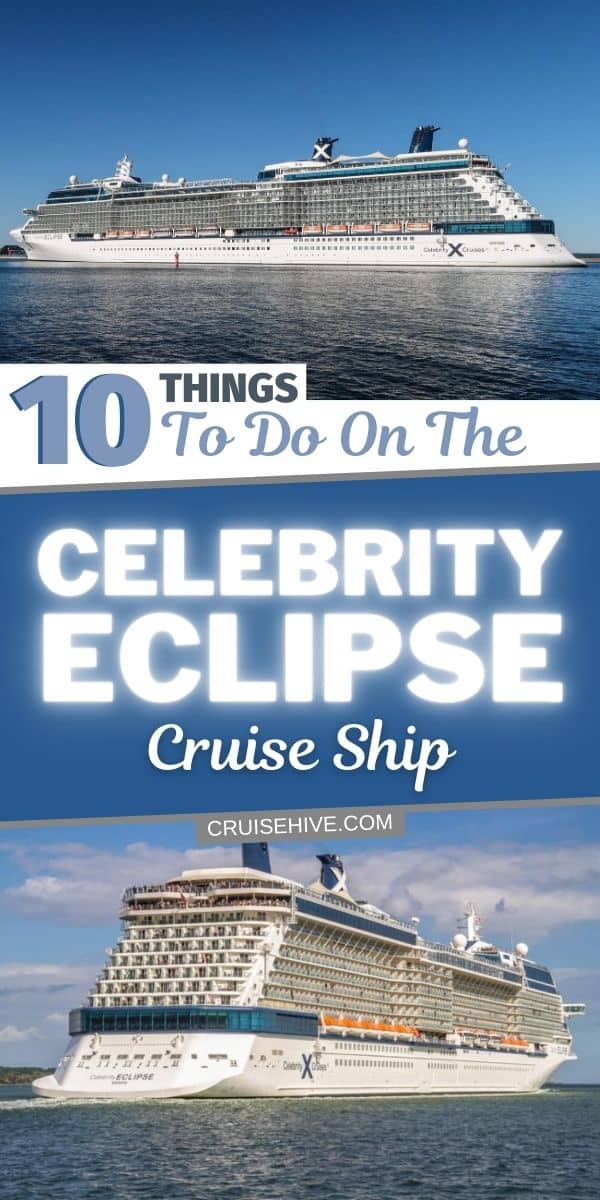