P&O Iona, the UK's largest ever cruise ship has departed on her maiden voyage out of Southampton, England. 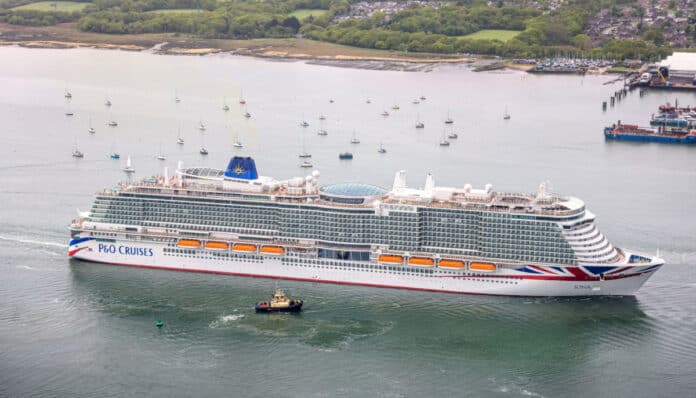 P&O UK’s newest cruise ship, the stunning LNG-powered Iona left the docks in Southampton on her first voyage at 9 PM, Saturday evening. The vessel is the fourth of nine Excel-class ships that Carnival Corporation, the parent company for P&O, intends to have sailing by the end of 2023.

The vessel, which is currently located on the UK’s west coast, is on a 7-day voyage which will see the vessel return to her homeport of Southampton on August 14.

Iona’s maiden season consists of several cruises to the Scottish isles on the West coast of the United Kingdom. Iona’s maiden voyage departed Saturday, cruised around Cornwall, and she will be anchored at the vessel’s namesake island for a kaleidoscopic firework display. After this, the vessel will do scenic sailing around the Isle of Colonsay, Lochbuie, Duart Castle, Tobermory, Bac Mòr, Fingal’s Cave, and the Sound of Jura Claggain Bay, Mull of Kintyre, and Sanda Island.

Guests onboard can enjoy entertainment from English singer-songwriter Tony Hadley, known for numerous chart-topping singles and successful albums the world over, and spectacular aerial shows in the vessel’s two-deck glass-domed SkyDome.

P&O’s President Paul Ludlow: “Iona’s maiden voyage is the start of a new era in travel as Britain’s most environmentally-friendly cruise ship, the first in the country powered by liquefied natural gas, sets sail. “For this special maiden voyage we wanted to bring guests to the island of Iona which has influenced many aspects of the ship – the sense of space in the SkyDome through to our gin still named “Columba”, the heather in our Marabelle gin distilled on board and, of course, the name of the ship.”

Iona is not just a much-hyped mega-cruise ship. She is, in fact, one of the most technologically advanced cruise ships in the world. Built at the Meyer werft in Papenburg, Germany, the vessel is powered entirely by Liquified Natural Gas. This ensures the vessel’s emissions are reduced by 25% for carbon dioxide (CO2) emissions, 90% reduction for nitrogen oxide (NOx) emissions, and a 100% reduction in sulfur (SO2) and fine particle emissions.

The 184,000 gross ton Iona has space for 5,200 guests who can enjoy 17 different restaurants onboard. Eight are specialty dining restaurants and 12 bars, including the first gin distillery at sea in partnership with Salcombe Gin.

Like her sister ship Mardi Gras, which set sail last week on her maiden voyage, Iona also features a stunning three-deck Atrium with stunning ocean views. In February of this year, the company started constructing the sister ship to Iona; Arvia, which will join the fleet in 2022.

Iona, in the meantime, will be sailing to the Scottish Isles and cruises on a more southerly course called the Southern Short Break, finding some sunshine until the end of September. After this, she will sail on a mix of cruises to Spain and Portugal, The Canary Islands, and Northern Europe.