The Popular Carnival Cruise Line AirShip is Heading for California

The Carnival AirShip which recently did a tour of the U.S. southeast is heading for another adventure in California. Carnival Cruise Line is sending the popular AirShip over at the end of December.

Carnival AirShip is Heading for California

The Carnival AirShip is making a come back but instead of returning to the U.S. southeast the iconic AirShip will head to California. Launching on December 31 the “ChooseFun” AirShip will spend a month touring the region in anticipation of the next new Carnival cruise ship which will be based there.

The month-long journey will start in Los Angeles and then onto Orange County, San Diego, San Bernardino and Riverside counties before heading to Northern California. The airship tour will promote the #ChooseFun campaign by Carnival Cruise Line and the Carnival Panorama which will begin sailing from Long Beach towards the end of 2019.

“Carnival is the number one cruise line from Southern California and the AirShip is a unique way to promote the many ways our guests can Choose Fun from the West Coast.”

The 120-foot long Carnival AirShip will be around in conjunction with Carnival’s first-ever Rose Parade float on New Year’s Day.

It will also be making an appearance at special events across California including other floats, schools, trampoline park locations of Sky Zone and the two homeports where the upcoming Carnival Panorama will be based which is Long Beach and San Diego.

The cruise line will also be launching sweepstakes and people can have a chance to win a free cruise for two. The two hashtags #ChooseFun and #JumpIntoFun need to be used on social media for the chance to win.

Further details will be announced about this closer to December 31 which is when the AirShip begins the tour. Carnival will make a donation to one of its favorites charities, St. Jude Children’s Research Hospital.

Carnival Panorama will be the third Vista-class vessel, she will introduce the first SkyZone trampoline park at sea when she debuts with a special 3-day sailing from Long Beach on December 11, 2019. The new ship will begin a year-round service sailing 7-day cruises to the Mexican Riviera on December 14, 2019.

Carnival Imagination and Carnival Inspiration are already based on the U.S. west coast and all three vessels combines are expected to carry over 600,000 guests annually which is more than any other cruise line.

Carnival Panorama is currently under construction by Fincantieri in Italy and once complete will be 133,500 gross tons just like her sister ships Carnival Vista and Carnival Horizon. 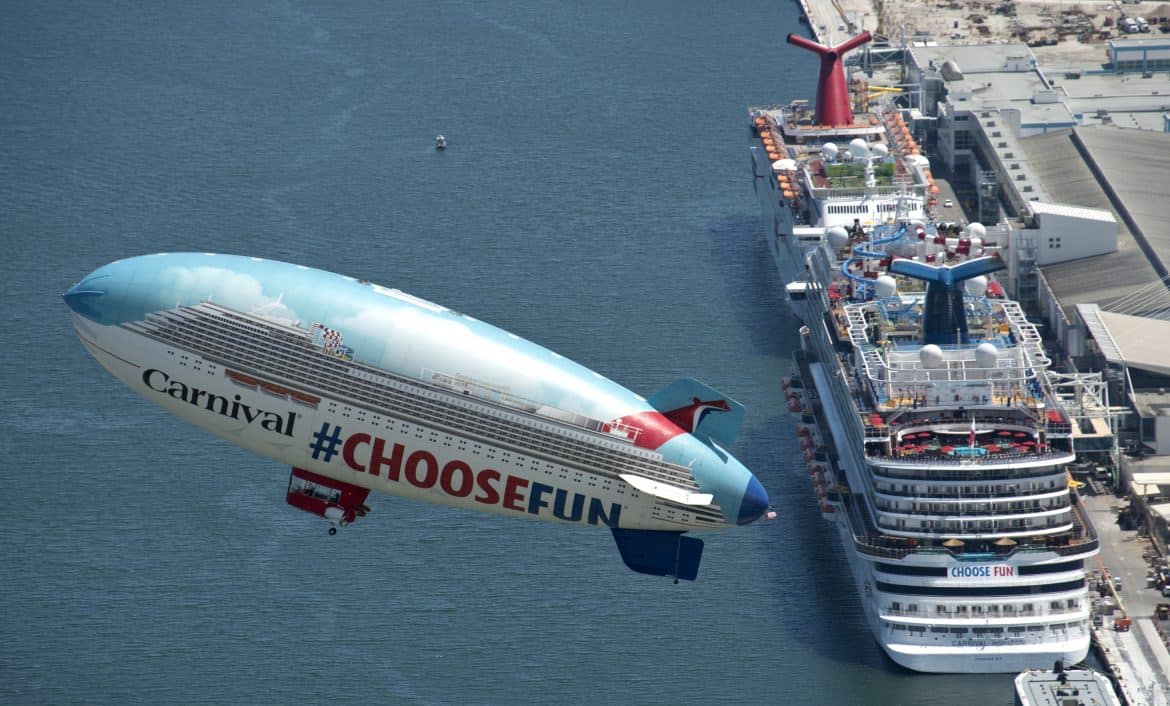