The Grinch Is Coming to Carnival Cruise Line This Christmas

This Christmas The Grinch will be coming to Carnival Cruise Line in his famous Santa outfit and part of the cruise lines Seuss At Sea program.

The legendary green character who’s as “cuddly as a cactus” and “charming as an eel” will surprise and delight guests of all ages as he makes appearances on all Carnival holiday cruises taking place throughout the month of December. The young and the young at heart can catch a glimpse of the cantankerous curmudgeon as he slinks and slithers throughout the ships with both scheduled appearances and spontaneous pop-up visits.

“The Grinch is an iconic and beloved Dr. Seuss character and we’re looking forward to incorporating his mischievous personality into our fleet wide holiday activities next month.”

Never a fan of the holidays, The Grinch will be up to his usual tricks in an attempt to “stop Christmas from coming!” He will playfully disrupt the on-board festivities and steal various items from crew members throughout the ship.  He will also participate in the end-of-cruise holiday show which promises lots of surprises. Whoever will be acting as the Grinch character will have a great time we’re sure!

There will be tons of special activities to keep the kids busy throughout December including The Grinch featuring at  Seuss at Sea’s Green Eggs and Ham Breakfast with The Cat in the Hat and Friends. The new “Grinchmas” program will be part of the Dr. Seuss Enterprises which debuted in 2014. The Grinch will make an appearance on all cruise ships in the fleet so beware! 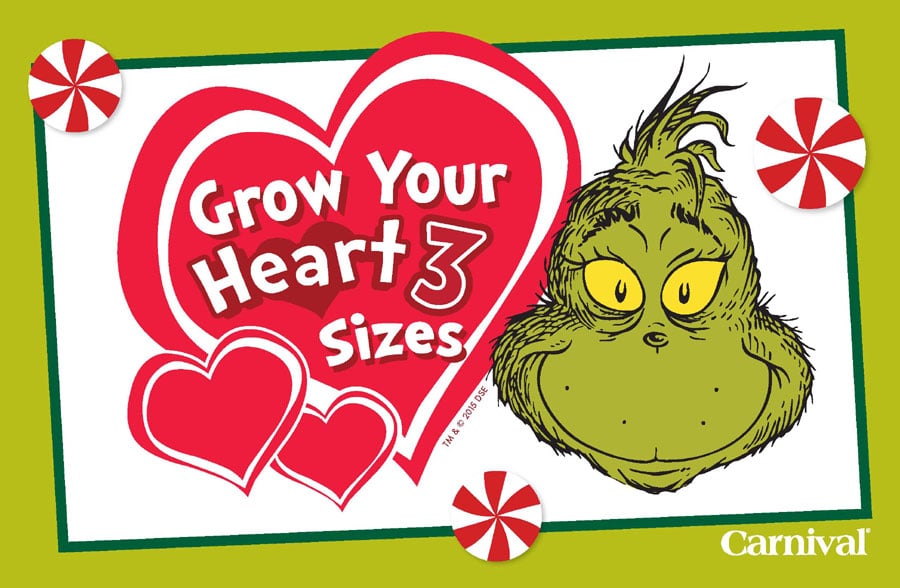