The Crowds In Liverpool Gave Queen Mary 2 A Joyful Send Off!

Cruise Hive has come across a video of the joyful crowds sending off Queen Mary 2 on her historic  transatlantic crossing which is part of Cunard Lines 175th Anniversary.

Huge crowds along the Mersey gave the Queen Mary 2 a grand send off for her Anniversary transatlantic crossing on July 4th. The video above shows the crowds enjoy the celebrations, it’s cruise ship departure like no other and we just wish every ships departure was this much fun! The crowds can be seen singing along to “New York, New York” and waving off the Cunard cruise ship.

The Queen Mary 2 is paying tribute to the original voyage made by the company’s first flagship, Britannia, on 4 July 1840. This journey inaugurated the first scheduled mail and passenger service across the Atlantic and Cunard will be celebrating this historic milestone in three cities which hold a special place in the company’s storied past: Halifax, Boston and New York.

Also here is official footage as Queen Mary 2 departs Liverpool under a sky full of fireworks:

The 150,000 gross ton vessel is now sailing towards Halifax, Nova Scotia where she will arrive on July 10th at around 6 AM local time. The arrival of once the largest cruise ship in the world will begin Anniversary celebrations on the united States east coast. The ship will end the festivities in New York. 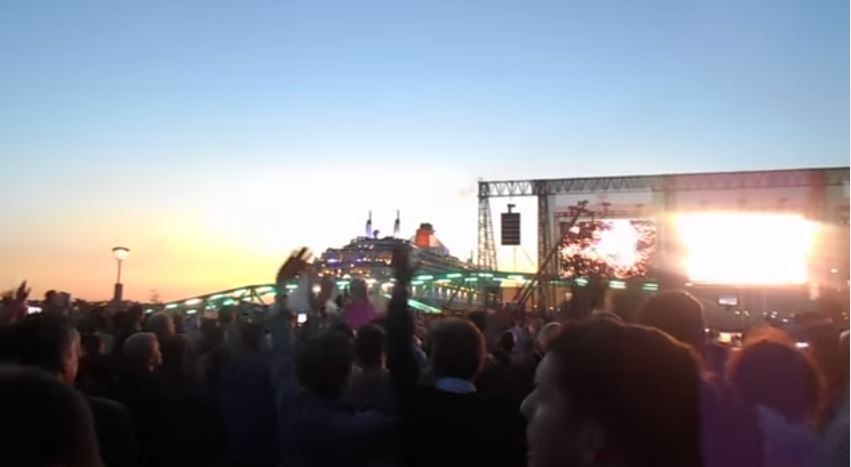