Details have been revealed on the first ever underwater lounge where guests can truly be among the ocean’s marine life.

We posted about the world’s first underwater lounge back in April 2016 and now further details have been released on this impressive space. Ponant, a French-owned cruise line will be featuring the “Blue Eye” lounge which will be located at the bottom of the hull under the water line.

“The state-of-the-art technology developed with PONANT lets guests become modern-day explorers, following in the wake of Jules Verne, Jacques-Yves Cousteau and the great adventurers. They will be able to observe the fauna and flora of this sub-aquatic universe and discover its sonorities. The sound system in the Blue Eye lounge will be installed by Michel Redolfi so as to reveal to the guests the amazing listening capabilities of their bodies. For the first time in the world, the public, during a cruise, will be able to ‘feel’ and be at the heart of an underwater world. They will need to use all of their senses.”

Ponants upcoming vessel the Le Lapérouse will be the first in the fleet to feature the stunning passenger underwater lounge. Le Lapérouse and Le Champlain will join the fleet in 2018, followed by Le Bougainville and Le Dumont-d’Urville in 2019. All the ships will have the Blue Eye Lounge.

The underwater lounge will be inspired by the life under the ocean with design elements inspired by marine life. The lounge will be breathtaking with technologies that project views on large screens live from the ocean. Ambient msuic and sounds will increase the atmosphere in the exclusive space.

It’s worth booking a sailing on one of the upcoming new ships just to experience the Blue Eye. 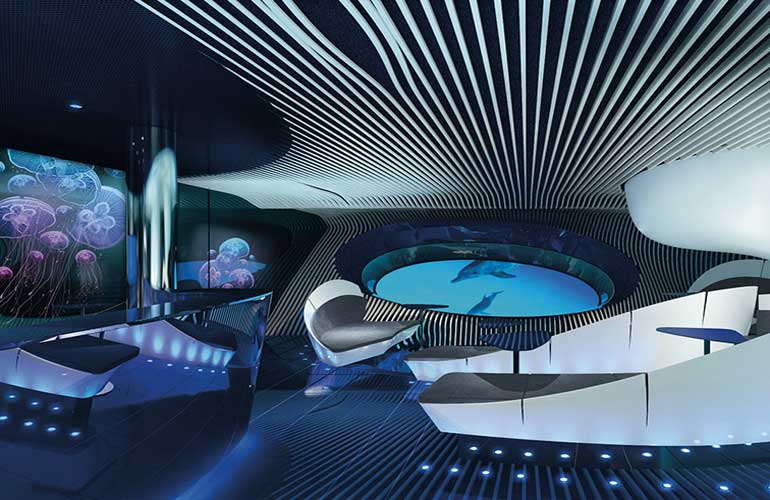