Cruise hive is sad to report that a passenger who was cruising aboard the Carnival Glory has gone overboard and had been reported missing Sunday morning 8th March, 2015.

The missing passenger is a 21-year-old male and a student from Virginia Tech. CCTV footage onboard the Carnival Glory has confirmed that he went overboard Sunday morning. At the time the Carnival cruise ship was just off the coast of Great Abaco Island in the Bahamas.

Here is a statement received from Carnival:

On Sunday morning, a 21-year-old male guest was reported missing on Carnival Glory and a review of camera footage confirmed a man overboard.  Authorities were notified, including the U.S. Coast Guard which commenced search and rescue operations. Additionally, the cruise ship Carnival Ecstasy deviated course at the company’s direction and assisted in the search up until yesterday evening in collaboration with USCG, along with other vessels in the area.  Carnival Glory also returned to the location and participated for a period of time in the search.

The search and rescue effort by USCG is continuing today and is taking place in the vicinity of Great Abaco Island, Bahamas. The company’s CareTeam is providing support to the guest’s traveling companions and family. We extend our heartfelt sympathy and concern for the family and loved ones of our missing guest. Carnival Glory is homeported in Miami and is on the first leg of a seven-day Caribbean cruise that departed Saturday.

Carnival Glory sailed back to where the student went overboard to begin a search which was also assisted by the Carnival Ecstasy. Both Carnival ships searched until resuming normal service on Monday March 9th. The United States Coast Guard is continuing to search the entire area.

The Carnival Glory is on a 7-night Eastern Caribbean cruise and had just started the itinerary when the passenger went missing. Due to the search efforts by the ship the port of call Half Moon Cay was skipped. The voyage has gone back to normal stopping at St Thomas, San Juan, Grand Turk and then arriving back at its home port of Miami, Florida on March 14th. 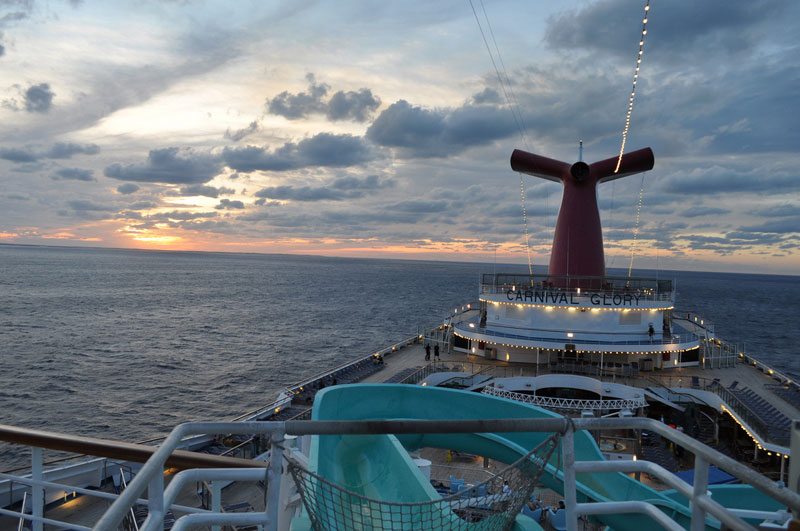