A Sneak Peek at Symphony of the Seas Ultimate Family Suite

Take a look at the Ultimate Family Suite features on Royal Caribbean's Symphony of the Seas, the fourth Oasis-class cruise ship.

Royal Caribbean’s Symphony of the Seas is almost upon us and the cruise line has released a new sneak peek of the ships ultimate Family Suite. We must say if only this could be enjoyed by all cruisers because it sure is a suite like no other!

Symphony of the Seas will soon be the new world’s largest cruise ship and when she does arrive in March 2018 guest who booked the all-new Family Suite are in for a treat. We get a sneak peek at the suite with behind the scenes footage and the design which is first being introduced on the Royal Caribbean cruise ship.

This adventures family suite has been designed to offer the best experience at sea. The 2-level Ultimate Family Suite includes a slide, LEGO wall, 3D movie theater-style room, balcony jacuzzi and all the modern accessories for the final touches. A great idea for when you furnish your home maybe?

Symphony of the Seas is Coming!

The Ultimate Family Suite will be featured on Symphony of the Seas which currently in the very final stages of construction at the STX France shipyard. The fourth Oasis-class vessel will depart on its maiden voyage on March 31 from Barcelona, Spain. The new cruise ship will spend its inaugural season in Europe and will depart on a transatlantic voyage in late October 2018 to begin a new service from PortMiami, Florida. Royal Caribbean’s Symphony of the Seas will offer week-long Eastern Caribbean cruises from its new homeport in November.

The build-up is really starting now for the ship’s arrival and we’ve already posted the latest construction photos from the shipyard, take a look at them all here.

Symphony of the Seas will be 230,000 gross tons and once in service will overtake sister ship harmony of the Seas as the world’s largest cruise ship. 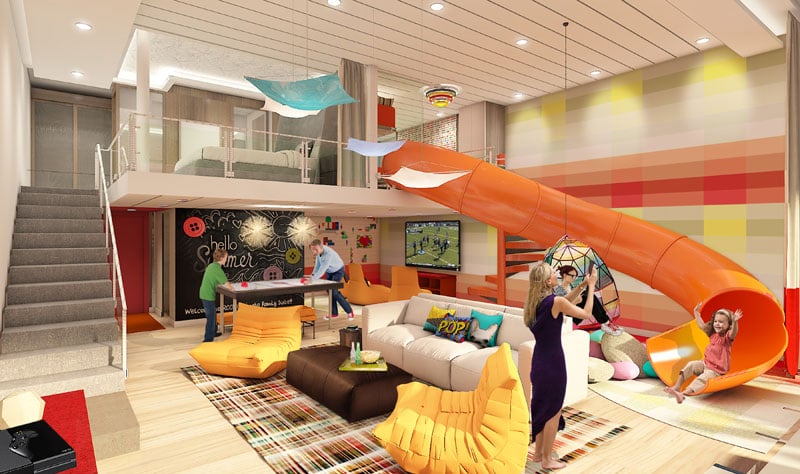 Criticism Against the CDC on Resuming Cruises in Recent Senate Hearing

Norwegian Cruise Line Sends Reminder to CDC After No Response