A woman went overboard from MSC Meraviglia early Thursday morning and the ship will now be delayed arriving back to its homeport. 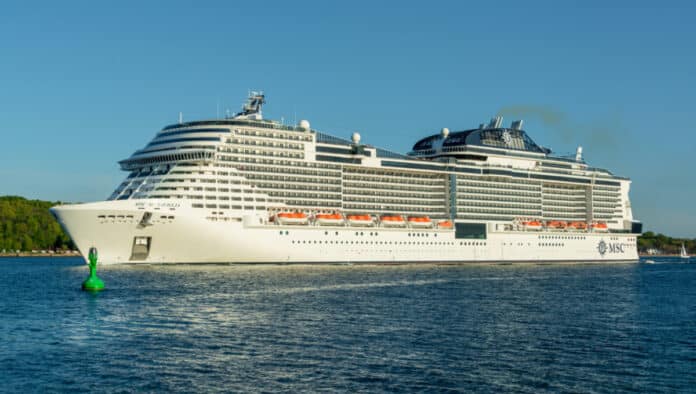 A woman overboard from MSC Cruises’ MSC Meraviglia was sadly found deceased off Port Canaveral early on Thursday, December 15, 2022. The ship was en route to return to its homeport when the incident occurred.

After a search of just a few hours, a 36-year-old woman overboard from MSC Meraviglia was found deceased offshore of Port Canaveral.

According to guests onboard, the initial call for an overboard situation was made at approximately 5 a.m., indicating the passenger went overboard on the ship’s port side.

Crew members conducted an onboard search to account for all guests, and other emergency measures were immediately initiated. The cruise ship began zig-zagging in the presumed search area, and additional air and marine assets from the United States Coast Guard (USCG) joined the effort.

Unfortunately, the woman’s body was found after a relatively short search, approximately 18 miles (29 kilometers) off the coast of Port Canaveral.

The woman’s identity and other details of the incident have not yet been released, as the investigation is still ongoing and family needs to be notified.

MSC Meraviglia was en route to Port Canaveral at the time of the incident, returning from a 4-night cruise to The Bahamas, having departed on Sunday, December 11 and visited Nassau and Ocean Cay MSC Marine Reserve.

The ship was due back in Port Canaveral to begin debarkation at approximately 7 a.m., but the emergency has delayed the vessel by several hours.

Tracking data now shows MSC Meraviglia with an estimated arrival time into Port Canaveral of 11:15 a.m., which will delay both debarkation as well as embarkation for the next cruise. The ship is currently moving at close to top speed at 20 knots (23 miles per hour / 37 kilometers per hour) as it returns to the port.

This may permit the ship to arrive earlier than the estimated time, but the vessel will need to slow as it enters the port channel and docks at terminal 10. After docking, the vessel still needs to clear customs inspection before debarkation can begin.

Only two other ships are in Port Canaveral today – Carnival Cruise Line’s Carnival Freedom at terminal 6, and Royal Caribbean International’s Mariner of the Seas at terminal 5.

MSC Meraviglia‘s next sailing is a 3-night Bahamas sailing that will visit Ocean Cay MSC Marine Reserve, MSC Cruises’ private island destination in The Bahamas, for an extended say before returning to Port Canaveral on Sunday, December 18.

The 171,600-gross-ton cruise ship can welcome as many as 4,428 guests at double occupancy, and up to 5,642 passengers when fully booked. Onboard, 1,536 international crew members provide excellent service as guests enjoy the ship’s 15 decks.

The ship is homeported at Port Canaveral through early April 2023, offering a variety of Caribbean and Bahamas itineraries, after which she will reposition to New York to offer longer Caribbean sailings from that homeport.

Sadly, this is not the only overboard incident to be reported recently. Just yesterday, a 23-year-old woman was missing overboard from P&O Cruises Australia’s ship Pacific Explorer near Australia, and she was found deceased after a search of several hours.

In late November, a man went overboard from Carnival Valor but was found alive in the water and rescued after an extensive search of nearly 20 hours.

Cruise Hive’s thoughts are with the family and friends of the woman at this difficult time, as well as with crew members and other guests onboard MSC Meraviglia in light of this tragic incident at the end of a holiday getaway.