MSC Cruises has taken delivery of their second Meraviglia-class cruise ship which is the largest in the fleet so far. A ceremony was held at the shipyard to welcome MSC Bellissima into the fold.

One of the fastest growing cruise lines has now welcomed another new cruise ship to the fleet at the Chantiers de l’Atlantique shipyard in Saint-Nazaire, France. The cruise line and shipyard celebrated the delivery ceremony and executives from both parties attended.

Now that the ship has been delivered MSC Bellissima is departing this evening straight for Southampton, UK for the much-anticipated christening ceremony on March 2, 2019. It will be the largest naming ceremony ever held at the British port. You can read more about it right here.

“Today’s delivery marks another chapter in the story of our partnership with Chantiers de l’Atlantique. Together, we have already brought to life 14 highly-innovative cruise ships, paving the way for our Company’s initial growth. Many more will be built together over the coming years to further deepen the reach of our fleet. Furthermore, MSC Bellissima’s elegance and beauty, as well as focus on the best and latest maritime and environmental technology at sea, bear testament to our restless pursuit for innovation.”

MSC Bellissima is the fourth new cruise ship to join the cruise line in less than two years! There are another 13 next-generation vessels to arrive by 2027 so expect to see more from MSC especially with ongoing expansion plans out of Miami, Florida.

Also Read: 2 New Ships and a Private Island Coming to MSC Cruises in 2019

The new ship will depart Southampton on March 4 for her maiden voyage. The ship will sail to Genoa, Italy to spend an inaugural season sailing western Mediterranean itineraries. In November 2019 MSc Bellissima will begin cruises out of Dubai and then in April 2020 will redeploy to the East China Sea.

The new Meraviglia-class vessel will more environmentally friendly with a cutting-edge exhaust gas cleaning system, an advanced wastewater treatment plant and more technologies to push the boundaries further. There are Liquified Natural Gas ships already on order from the cruise line too.

Guests will enjoy the world’s first virtual personal cruise assistant called “ZOE” which will be in every cabin. The ship is 171,598 gross tons, has a guest capacity of 4,434 at double occupancy, has 2,217 cabins along with 1,536 crew members. 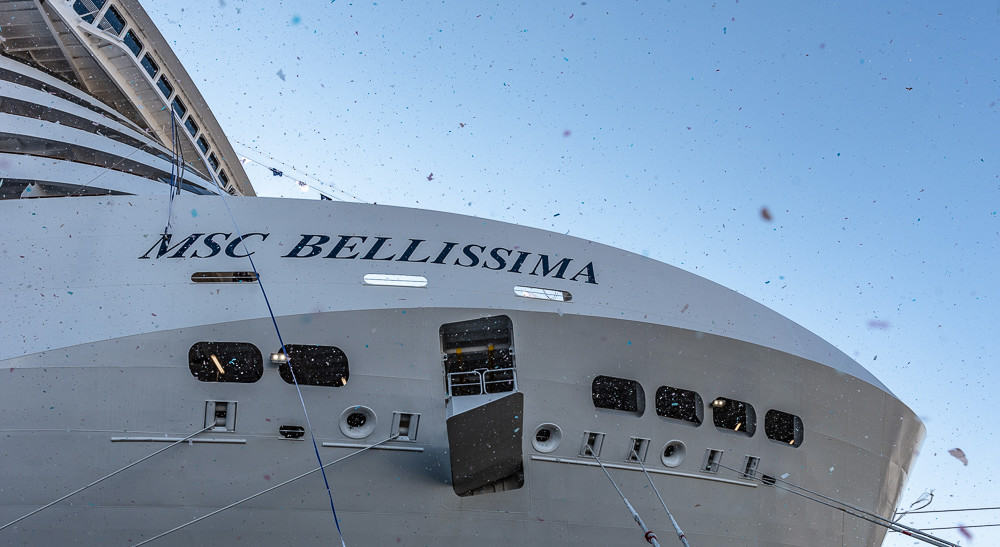