The cruise ship which is operated by Princess Cruises has been in the media a lot over the past week for many different reasons and now hopefully all the problems will be fixed.

The Sea Princess has just had a gastrointestinal outbreak causing over 200 guests to be sick on its 14-night voyage to Singapore and back. This is otherwise known as Norovirus which can also spread on land. The ship arrived back in Fremantle, Western Australia on Saturday with much attention due to the outbreak.

That cruise there were also some mechanical issues which stopped the ship from calling at ports. According to Cruise Critic it seems to be related to the ships propulsion as the Sea Princess had been sailing at a reduced speed.

Cruise Hive has received a response from Princess Cruises which states the following:

We have been carrying out a program of work on Sea Princess to address a technical problem that has affected the ship’s ability to sail at her full speed on recent itineraries. In order to make the necessary repairs, the work continued while Sea Princess has been alongside in Fremantle following her arrival in the port on Saturday. As repairs were carried out, an additional technical issue was identified, and it was determined that all technical issues must be addressed immediately.

On this basis and with the deepest of regret, we have made the difficult decision to cancel Sea Princess’ current cruise and proceed to dry dock where all the required repairs can be made. We are profoundly sorry for the disappointment of our guests who have already been so understanding and patient in relation to earlier necessary changes to their original itinerary.

All guests will receive a full refund of their cruise fare plus a 100% future cruise credit.

We have a Care team on the way to Fremantle to assist our guests as fully as possible, including with air flights if needed. While these arrangements are made, guests will be able to remain onboard Sea Princess with access to her full hotel facilities.

Sea Princess is a currently on a 14-day cruise between Fremantle and Brisbane.

Princess Cruises has now cancelled the next cruise which was scheduled to depart the same day the Sea Princess arrived in Fremantle on September 13th. Instead of sailing a 14-day cruise the vessel will spend time in dry-dock so that engineers can solve all the mechanical problems at once. As a result many passengers for the 14-day cruise to Brisbane have received a full refund from the cruise line along with a future cruise credit of 100 percent.

It’s not clear what the technical issue is or how long the ships dry dock will be but the cruise line is expected to release further details soon. The Sea Princess is not as large as the new ships like Royal and Regal Princess but is still a popular choice for cruiser in Australia and the surrounding region. The ship is 77,500 tons and can carry 1,950 passengers. 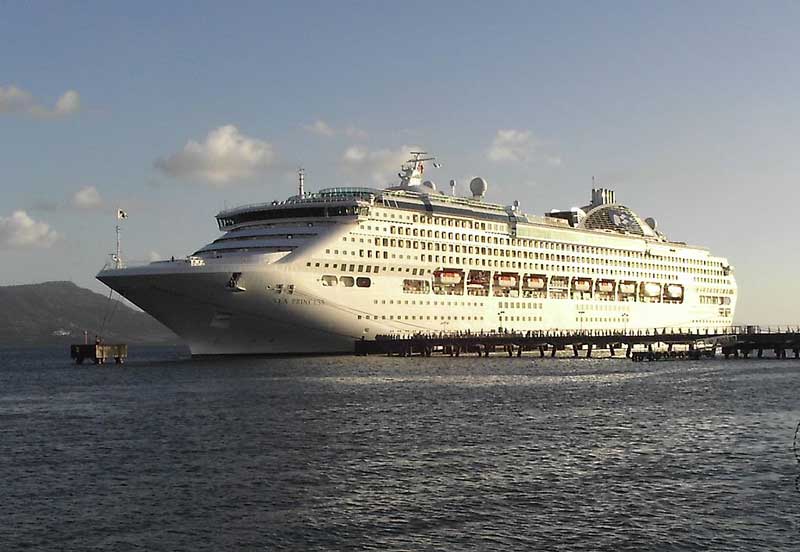