Santa Claus is very busy at the moment preparing for the delivery of billions of gifts around the world. He managed to find some time to try out the BOLT rollercoaster that’s been installed on the new Carnival cruise ship, Mardi Gras.

One of the most anticipated new cruise ship features has had Santa’s approval! Sana took some time out of his busy schedule to ride on the BOLT roller coaster installed on the new Mardi Gras cruise ship.

Santa zipped along and enjoyed the thrills that the first roller coaster at sea offers. The track is 800 feet long and features a hairpin curve around the iconic funnel. The ride can reach speeds of up to 40 miles an hour. BOLT is electric powered and can cater to two riders each time.

The feature has been developed by Germany-based Mauer Rides and is the first cruise ship attraction of its kind.

We’re not sure if the views 187 feet above the water line can beat those from his sleigh, here’s what he said:

“Never in my wildest dreams would I think a rollercoaster could be on a cruise ship.  It’s something we’ll be talking about at the North Pole for a long time!”

Now that Santa has approved of the new Carnival cruise ship she can be delivered to Carnival Cruise Line later in the week. The ship is currently receiving the very final touches at the Meyer Turku shipyard in Finland. Once delivered, Mardi Gras will have to remain on hold until April 24, 2021.

The vessel will offer Caribbean cruises out of the new Carnival Terminal 3 at Port Canaveral, Florida. The ship was originally scheduled to debut in August 2020.

The ship is the first in the fleet that’s powered by Liquified Natural Gas (LNG). She’s 180,800 gross tons with a guest capacity of 5,282 at double occupancy. Until the ship finally begins cruises, Carnival is working on implementing new health measures and following the framework on the CDC Conditional Sailing Order. 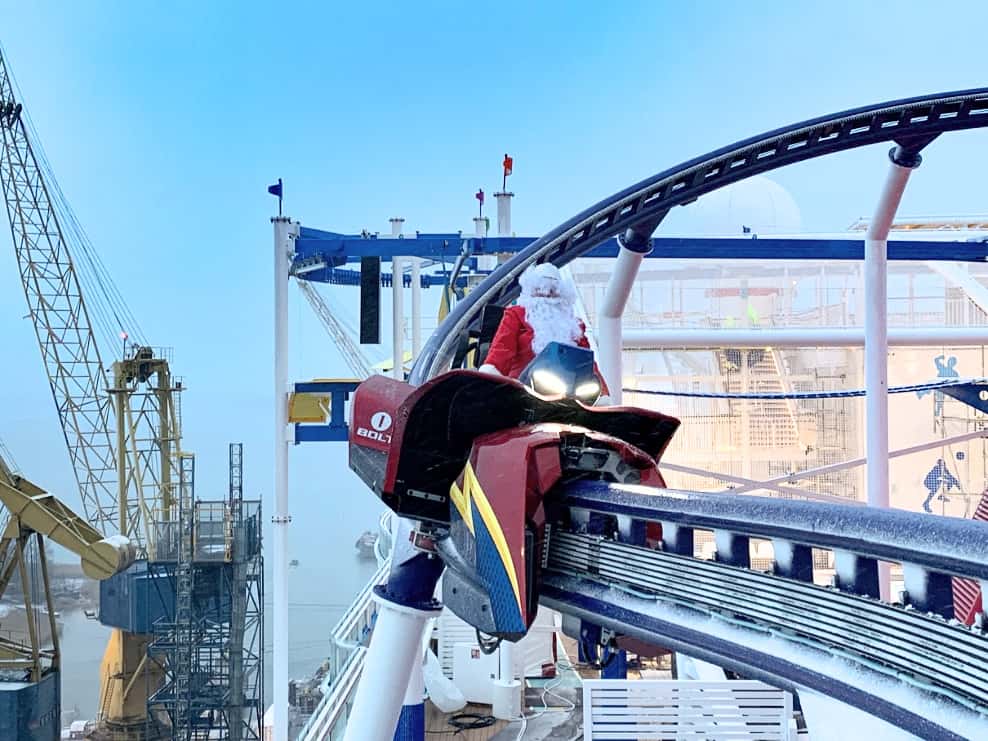