Royal Caribbean unveils the entertainment lineup onboard the world's largest cruise ship, Wonder of the Seas, with four new productions. 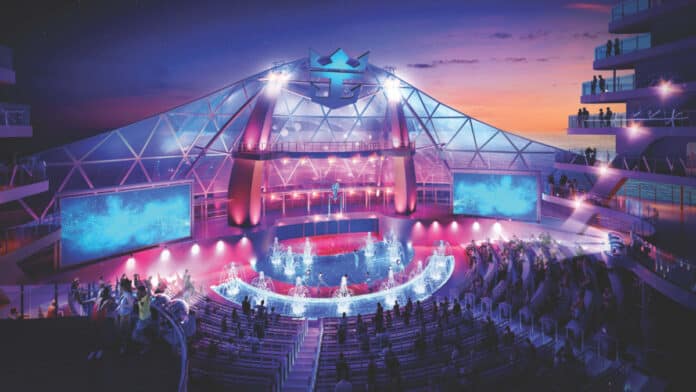 As Wonder of the Seas steadily makes her way across the Altanlct Ocean, Royal Caribbean International revealed details on the entertainment options guests can expect onboard. The cruise line calls the lineup a ‘Wonder for the Senses Across Air, Ice, Water, and Stage.’

More than 100 world-class performers and technicians will ensure the shows provide the high-class entertainment Royal Caribbean is known for. Shows include an aquatic display in the AquaTheater, champion ice skaters performing in Studio B, and live music such as salsa, jazz,  and acoustic performances in the various bars and lounges around the biggest ship in the world.

Four Main Shows to Headline on Wonder of the Seas

With the massive size of the Oasis-class Wonder of the Seas, there is more than enough room to have a wide variety of entertainment onboard. Royal Caribbean will feature four main production shows once she starts operations on March 4 from Florida.

Revolving around ‘A Wonder for the Senses Across Air, Ice, Water and Stage,’ Royal Caribbean hopes to bring wonder, adventure, and innovation to life across the cruise line’s four signature and high-tech “stages,” air, ice, stage, and water.

The iconic Studio B ice-skating rink will host a unique story about the earth’s changing seasons. A variety of visual effects and lighting will transform the venue from one season to the next, enhancing the performers’ characters and every move.

Royal Caribbean’s very own superheroes, The Effectors: Captain Viz, Lume, Pixel, and Reverb, will debut in the Royal Theater later this year to battle against their archnemesis Crash and his sidekick Burn. To save the planet, the heroes rely on their artistic talents, performance skills, and the limitless power of their creativity. The Effectors’ latest installment features trailblazing uses of autonomous technology pioneered by Royal Caribbean.

Voices: An Intimate Performance on a Grand Scale

With this production, the modern world of virtual communication comes together with the evocative power of live performances in a completely new style of musical presentation. This bespoke performance, featuring a medley of music, singing, and dancing, will emphasize the power of performance art to bring people together.

Besides the four main production shows, there will be much more to enjoy on Wonder of the Seas. There will be live country music at The Mason Jar Southern Restaurant & Bar, live Caribbean music and DJs at The Lime & Coconut and the pool deck, and Jazz music at the Music Hall.

For those looking to bring their dancing shoes for some Latin moves, a six-piece band will be playing salsa, cumbia, merengue, samba, and more at Boleros. Those who like to sit and enjoy a pint while enjoying acoustic performances can head to the Cask & Clipper English Pub.

The 5,734-passenger, 236,857 gross tons, Wonder of the Seas, sets sail on March 4, 2022, from Port Everglades, Fort Lauderdale. In April, she will head back to Europe for a summer in the Mediterranean from Barcelona, Spain, and Civitavecchia, Italy. By October, Wonder of the Seas will return to the US, this time sailing from Port Canaveral.