The most important aspect of the entertainment that Royal Caribbean is bringing to its guests is “new” and “cruise industry” firsts. The cruise line has so many different shows and performances to offer and some really will be breaking the barrier in innovation which even Broadway or London’s West End would be jealous of.

[quote_box_center] “The level of ingenuity, creativity and sheer imagination that has gone into the creation of the entertainment onboard Quantum of the Seas is staggering,” said Lisa Lutoff-Perlo, Executive Vice President, Operations, Royal Caribbean International. “We are taking a quantum leap in all aspects of ship design and programming with the Quantum class, but the entertainment is especially remarkable. These shows and productions are truly one-of-a-kind, and we are confident that our guests will be WOWed.”[/quote_box_center]

Two70 which is a dedicated space onboard Quantum of the Seas where there will be futuristic and innovative performances will be in the driving seat for Royal Caribbeans entertainment. One of the main highlights of Two70 is Vistarama which are a floor to ceiling windows that also project amazing images in 12K resolution. Also featured at Two70 are the only performance of its kind at sea and on land, it;s the Roboscreens which move on large robotic arms displaying a perfect 3D and visual experience.

[quote_box_center]“The entertainment in Two70° is simply magical,” said Nick Weir, Vice President, Entertainment, Royal Caribbean International. “There is an incredible team of risk takers and dreamers here at Royal Caribbean. Together, we saw the magnitude of what this room could do and shot for the stars. We’ve always brought the best of land to sea, but in Two70° we are creating something that has never been done anywhere else in the world.”[/quote_box_center]

Take a look at a new video posted by Royal Caribbean teasing all the different entertainment on offer for Quantum of the Seas:

Quantum of the Seas sister ship Anthem of the Seas will also be featuring similar entertainment and that ship will launch in 2015. Has Royal Caribbean gone all out this time? Let us know what you think in the comments below. 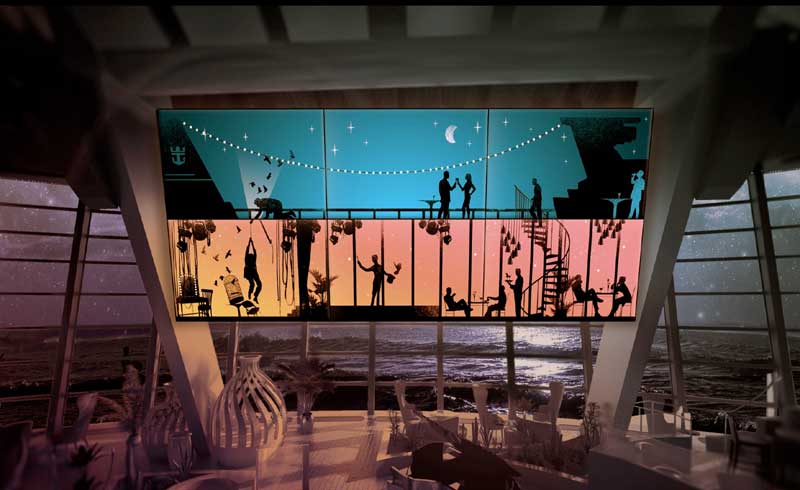