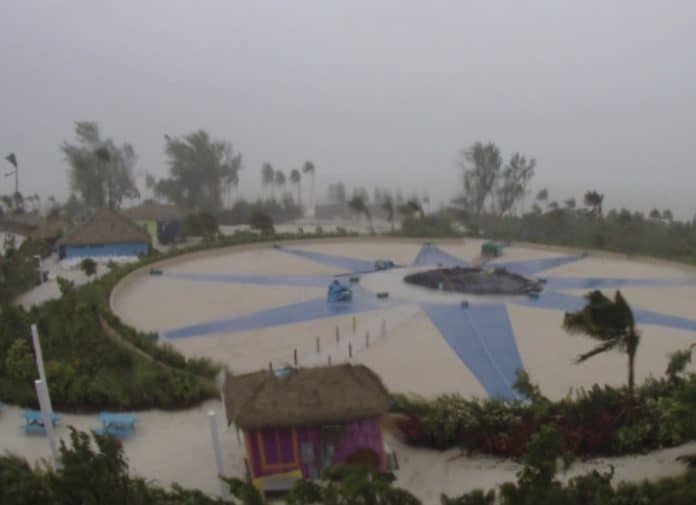 Royal Caribbean has released photos of the private island CocoCay in the Bahamas during Hurricane Dorian.

We glad to report that Royal Caribbean’s private island Perfect Day at CocoCay in the Bahamas has relatively come through with no major damage from Hurricane Dorian. The photos were first released by the cruise line’s Chief Meteorologist James Van Fleet who has been keeping everyone updated on the developments of Dorain and the impact to cruises.

You’ll see above the large helium balloon feature in the middle named “Up, Up And Away” has been deflated and is being held down by weights so the high wind gust will not blow it away. As you can see the island is still being impacted by the now category 4 Hurricane with the eye currently located on Grand Bahama Island 110 km to the north.

In another photo which shows the “Thrill Waterpark” everything seems to be in place with no major structural damage. In fact, there really doesn’t seem to be any impact with not even any broken branches or vegetation scattered around the walkways.

With Dorian expected to start moving north just off the Florida east coast on Tuesday morning, things should soon return to normal for the cruise line’s newly renovated private island.

The island closed to cruise ships on August 28 and Royal Caribbean is planning on reopening it on September 4. The island was also closed so that the majority of 400 Bahamian employees could return back to their homes around the Bahamas to prepare for the Hurricane.

Update: We’ve just posted about Royal Caribbean delaying the opening of the island until Saturday so that a full assessment of any damage can be completed. Here are the details.