Royal Caribbean has been busy recently with Hurricane relief efforts in the Caribbean due to devastation across several islands from Hurricane Irma and Maria.

The Royal Caribbean cruise ships have also been involved in evacuating stranded tourists and local residents from several islands in partnership with local governments. As seen in the image above the cruise live has delivered a total of almost 1 million cases of relief aid to Hurricane hit destinations.

Adventure of the Seas recently arrived back in Port Everglades, Florida on October 3 where evacuees of Hurricane Maria from Puerto Rico, St. Croix and St. Thomas disembarked. The ship loaded back up full of essential supplies ready for its voyage to Puerto Rico on October 6.

Photos of Adventure of the Seas back in Port Everglades

Adventure of the Seas Hurricane Relief
1 of 10

Not just Royal Caribbean but several other cruise lines are actively providing supplies and aid to those residents impacted by Hurricane Irma and Maria in the Eastern Caribbean. It will take a long time to recover and sadly many residents never will. Cruise Lines are starting to make a return to ports including Puerto Rico, Grand Turk and even Key West in South Florida. The sooner ships begin regular calls at destinations like St. Thomas and St Maarten the better so businesses can thrive once again from the passenger income.

Our thoughts are with all those impacted by the devasted Hurricanes in September. 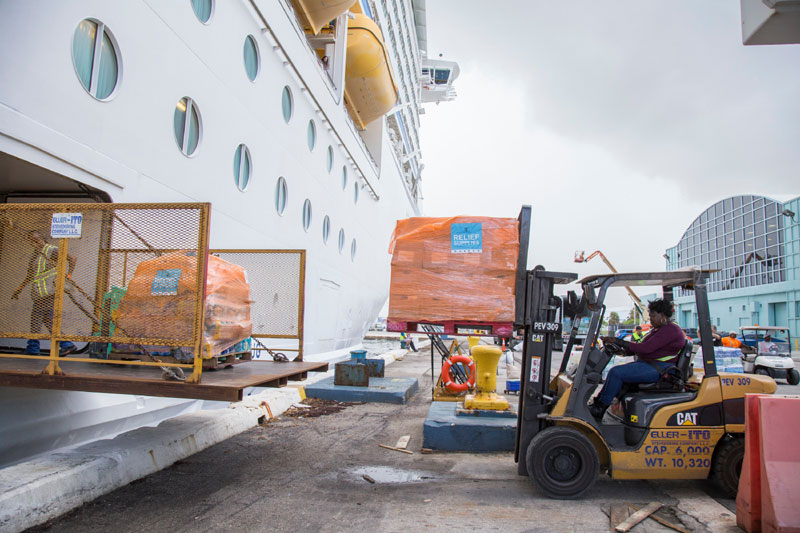