The record-breaking cruise ship Oasis of the Seas which took Royal Caribbean into a new era of cruising in 2009 is to have a $165 million upgrade, a renovation that will take 63 days to complete.

Oasis of the Seas, which is the first in her class and at the time of delivery was the world’s largest cruise ship by far, is set to have a worthy upgrade. Royal Caribbean is spending $165 million to add new features and enhancements to the ship during a 63-day dry dock.

To bring the vessel in-line with the newest and most recently upgraded ships in the fleet, entire areas will be re-imagined to offer an even better cruise experience on the Oasis-class ship. The amplification of the ship is part of the cruise line’s Royal Amplified investment program of $1 billion on 10 ships across four years.

“When Oasis of the Seas debuted as the world’s largest and most groundbreaking cruise ship a decade ago, the typical cruise vacation as the world knew it was forever changed. Today, our Oasis Class ships continue to lead the industry and attract vacationers new to cruising.”


“Now with the opportunity to disrupt the industry once again, we’ve gone all-in with our biggest and boldest amplification yet. Oasis will turn heads when she arrives to Miami this November and the Northeast in May 2020.”

One of the biggest highlights during the long dry dock will be the completely renovated pool deck. The one neighborhood out of a total of seven will have a new Caribbean-inspired look featuring the Splashaway Bay aquapark and The Lime & Coconut signature bar.

Popular favorites already seen on some other Royal Caribbean ships include the 10-story high Ultimate Abyss slide at the aft, Perfect Storm waterslides, and the Music Hall from the Quantum-class ships. Oasis of the Seas will also feature the first in the fleet barbecue concept called Portside BBQ and a new Spotlight Karaoke.

Oasis of the Seas New Spaces
1 of 6

Also Read: Oasis of the Seas to Sail from Cape Liberty in 2020

Once the amplification is completed, the huge mega ship will debut on November 24, 2019, out of the shiny modern Royal Caribbean Terminal A at PortMiami, Florida. She will sail 7-day cruises to the eastern and western Caribbean. The 220,900 gross ton cruise ship will begin sailing from New York in May 2020 for the very first time, and she will then reposition to the nearby Cape Liberty port in Bayonne, New Jersey in summer 2020. From there she will offer 7-night cruises to the Bahamas. 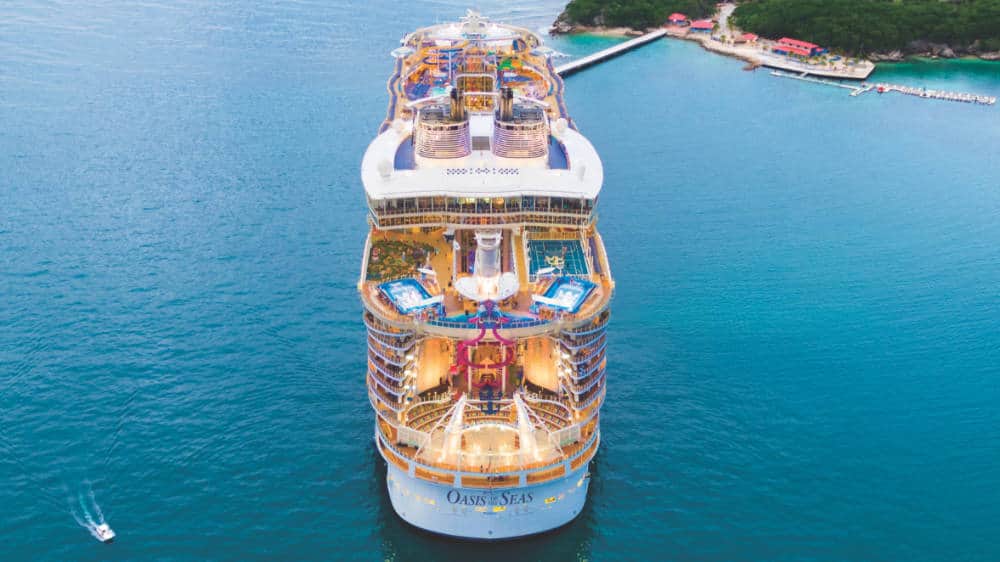