We’ve been making sure readers stay updated on the impact Hurricane Florence and Isaac impact the cruise industry. For Royal Caribbean, only one cruise ship has been forced to alter itineraries.

Grandeur of the Seas Altered Itineraries

The impact Hurricane Florence has caused to cruise ships has been limited thanks to cruise lines altering itineraries and keeping guests far from the storm. Royal Caribbean has only had one ship so far affected by Florence and now further updates for two itineraries of Grandeur of the Seas have been released.

The Royal Caribbean cruise ship is already sailing a modified September 8 sailing from Baltimore, Maryland on the U.S. East Coast. Instead of 5-night sailing to Bermuda, the ship is sailing to Nassau, Bahamas today and then will be in Port Canaveral on September 12 and 13. The ship will arrive back in Baltimore on September 16.

As of writing this the next scheduled departure from Baltimore on September 13 has been altered. No specific details have yet been released by Royal Caribbean but the cruise is now set to be delayed until September 16. The cruise line stated “The departure date and time, as well as the itinerary, are currently being finalized. We do not expect the departure date to be later than Sunday, September 16th. We will provide another update at 7 pm EDT, September 11th.”

If you do have any upcoming cruises this week do check for official updates from the cruise line. Royal Caribbean is monitoring all the storms and Hurricanes in the Atlantic and the Caribbean right now and making sure those on ships are kept far away.

Hurricane Florence is a category 4 storm and is very dangerous with maximum sustained winds of 140 mph. Florence continues to gain strength as it moves west towards the U.S. east coast.

We’ll keep updating Cruise Hive readers on any new developments impacting cruises, there’s a lot coming out right now as Florence gets closer to the U.S. coastline and new storms develop in the Caribbean. Don’t miss anything by checking our Hurricane coverage here. 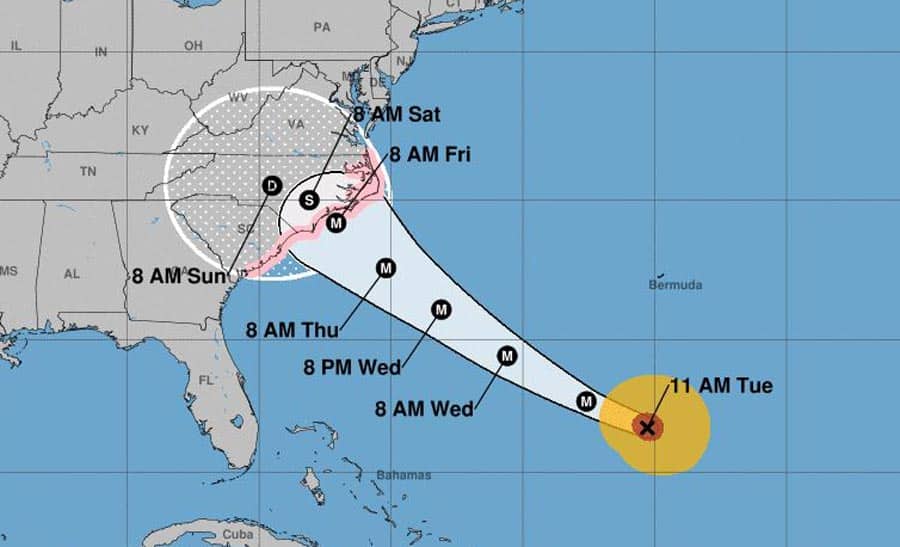