Royal Caribbean is forced to cancel a port of call at Cozumel in Mexico due to Tropical Storm Grace, which is sweeping across the Caribbean and will shortly become a Hurricane. 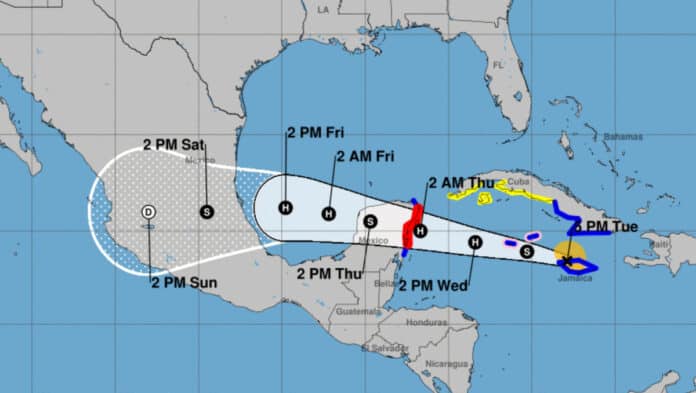 Royal Caribbean is forced to make an itinerary change for Symphony of the Seas due to Tropical Storm Grace sweeping across the Caribbean and heading for Cozumel, Mexico.

Symphony of the Seas Itinerary Change

Tropical Storm Grace which is expected to become a Hurricane in the coming hours, has forced the first cruise ship itinerary change. Unfortunately, it’s for Royal Caribbean’s Symphony of the Seas.

The world’s largest cruise ship is currently sailing a week-long Western Caribbean cruise and was scheduled to make a call at Cozumel, Mexico, on Wednesday, August 18. Grace’s route is currently directly over the island when it hits on late Friday and early Thursday as a Hurricane.

As a result, Symphony of the Seas’ call to the island is cancelled, and will instead spend a day at sea. Royal Caribbean has added a visit to Nassau in the Bahamas to make up for the cancelled call.

The Royal Caribbean cruise ship will stay in Nassau from 1:00 PM to 8:00 PM, and the ship will then make her final call at the cruise line’s private island of Perfect Day at CocoCay on Friday as normal.

The vessel will still arrive back home in Miami, Florida, as scheduled, and guests will be happy to know they were kept away from the storm and still managed to enjoy the same number of port visits. Symphony of the Seas has already made a call at Costa Maya in Mexico on Monday and is calling at Roatan today, August 17.

Monitoring Independence of the Seas Sailing

The cruise line is keeping a close eye on the growing Tropical Storm as there could be an impact on Independence of the Seas’ scheduled arrival on Friday, August 20. There are no itinerary changes for that ship, but that could change in the coming days.

Do keep checking for any official updates from Royal Caribbean if you are on the Independence of the Seas seven-night Western Caribbean cruises that departed the Port of Galveston on August 15. In fact, this is the ship’s first sailing back since March 2020 and the first in the fleet to restart operations out of Galveston, Texas.

Grace to Become a Category 1 Hurricane

Tropical Storm Grace is becoming stronger, and the National Hurricane Center (NOAA) is expecting it to become a category 1 hurricane in the coming hours. The storm is currently located over another cruise destination, Jamaica, 5 miles south of Montego Bay. The port where the Carnival Sunrise became the first cruise ship to return since the island first closed to cruises in 2020.

Grace is currently moving west at 15 MPH and has maximum sustained winds of 50 MPH. As the storm heads over warm water, the strength will intensify, which is very concerning for the Cayman Islands and the island of Cozumel, both popular cruise ports.

Cruise Hive will keep readers updated on this developing news, including any impacted cruise ships and ports.