Royal Caribbean has revealed plans for a dramatic new cruise terminal for PortMiami. The new facility will be able to cater for the Oasis class ships and scheduled to be completed in 2018.

The agreement with the city to build the striking new cruise facility still needs to come before the Miami-Dade County Board of County Commissioners on July, 2016. If all goes well there will be a new PortMiami view in the near future.

“We are truly excited to be working with Miami-Dade County and PortMiami to create not just another cruise terminal, but a truly iconic building. This new terminal is a symbol of our commitment to Miami, the city where our company first started almost 50 years ago. We can’t wait to bring an Oasis-class ship to PortMiami.”

The terminal will be 170,000-square-feet and nicknamed ‘Crown of Miami” because of its distinct shape. The modern looking building will also light up at night and feature the cruise lines logo on the left.

Just take a look at the stunning new renderings below:

All Renderings By: Royal Caribbean

Royal Caribbean has also hinted that an Oasis class ship could be based at PortMiami once the new terminal is completed. At the moment the Oasis class ships can only sail from Port Everglades, Port Canaveral and of course PortMiami, Florida is the capital of the cruise industry and deploying the world’s largest class cruise ship there would make sense. We can expect more details about this in the near future.

Once the new terminal is built Royal Caribbean is anticipating on generating 1.8 million cruise passengers per year. 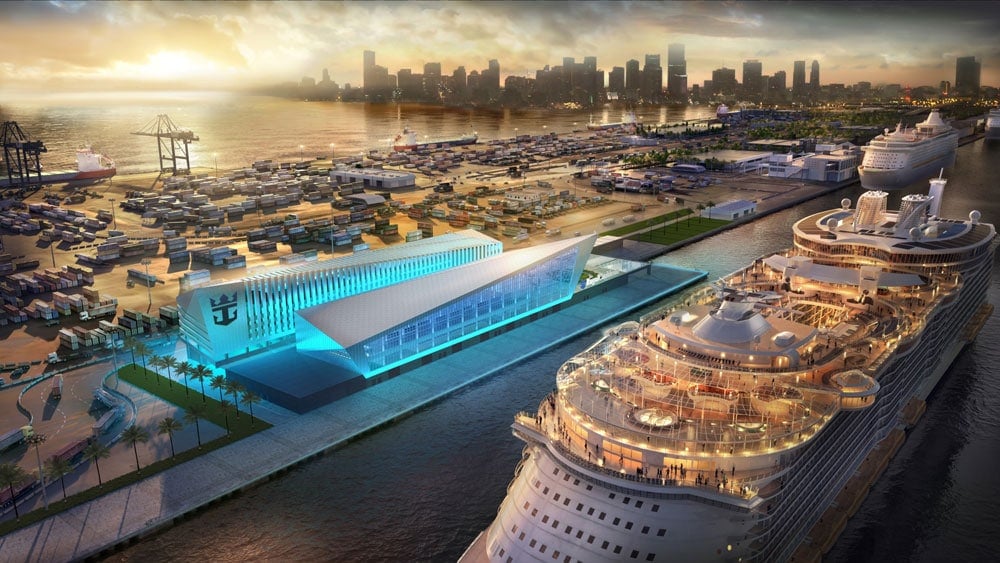