9 Reasons to Cruise on the Norwegian Breakaway Cruise Ship

Launched in the spring of 2013, Norwegian Breakaway was one of the first two ships in the Breakaway series that Norwegian Cruise Line ordered, alongside sister ship Norwegian Getaway. The two are the only Breakaway-class ships, with Norwegian then switching its attention to larger and newer Breakaway-plus class ships, including Norwegian Escape, Norwegian Joy, Norwegian Bliss and Norwegian Encore.

If you’re more familiar with the newer and larger Breakaway-plus class, you might be hesitant about cruising on Norwegian Breakaway or Norwegian Getaway. However, you definitely shouldn’t be. These two Breakaway-class ships both deliver stellar cruising experiences.

With construction starting in 2011, Norwegian Breakaway has since traveled up and down the East Coast of the United States and around the Caribbean. The ship, with its hull art designed by Peter Max and its godmothers (yes, that’s ‘godmothers’ plural) being The Rockettes, certainly encapsulates a certain New York City style that you’ll be hard-pressed to find on some other cruise ships.

Over its lifespan, Norwegian Breakaway has made headlines several times. In 2018, the cruise ship sailed through a blizzard, during which there was onboard flooding and some guests claimed they were traumatized by the rough waters. Then, in 2020, the ship sailed during the very beginning of the COVID-19 pandemic, and several passengers came down with the deadly virus, including some that did succumb entirely.

1. Norwegian Breakaway offers more of a resort feel than a cruise ship feel

It’s true. If you love the endless activities, near-endless options, extreme variety and non-stop entertainment that you can find at a high-end, Caribbean resort, then you’ll love Norwegian Breakaway. This is no subpar cruise — it’s a fun-filled, total-package experience that honestly will make you feel as if you never even want to leave the ship (when, in comparison, on some cruises, all you want to do is get to the next port!).

Of course, with any great resort experience, you’re going to want a great pool, and that’s exactly what Norwegian Breakaway offers. The ship has a main pool on its Deck 15, four hot tubs and then a separate pool in The Haven (for VIPs only).

However, beyond the pool, there’s an amazing Aqua Park that really blows minds. While some on-board, cruise ship waterparks only offer two or three slides and a kiddy pool, Norwegian goes above and beyond, offering a huge variety of waterslides, such as two free fall slides to start things off, followed by a few more, different slides. There is, of course, a kiddy pool, too.

But if you want to stay nice and dry during your cruise, there are still plenty of ways to soak up the sun on Norwegian Breakaway’s multiple decks. There’s a Sky Trail, which is a ropes course; a bungee trampoline; a zip line; a rock climbing wall; and a sporting area for ball games such as basketball and soccer.

And, if you don’t really feel like getting your sweat on, but you still want to get some rays, you can do so on one of the several sun decks, including the one next to the pool and others on Decks 16 and 17.

Two adults-only decks exist, SpiceH20 and Vibe Beach Club. The former is free to enter and hosts parties at night. The latter requires a fee, but comes with extra perks such as luxurious seating, whirlpool tubs, free drinks and snacks and chilled towels.

4. The entertainment continues inside

Want to stay cool as you sail around warmer climates? You’ll find similar indoor entertainment options at just about every turn.

In the theater, which holds 800 people, you can check out a variety of shows, from family-friendly performances to Broadway favorites to music and dance extravaganzas.

There’s always plenty of fun going on with daily activities coordinated by the crew, too, so one day you might find a cooking demo, the next, a dance class. You can catch live game shows, friendly competitions and more.

While there are definitely more extra-cost dining options aboard Norwegian Breakaway than there are complimentary dining options, you certainly won’t feel a lacking for any dining experiences if you just go with the eateries included in your cabin fare.

One great thing about Norwegian Breakaway dining is that it’s pretty freestyle, meaning you can eat when and where you want, without waiting on a bunch of reservations.

O’Sheehan’s is a 24-hour pub-style restaurant, serving breakfast to dessert. Shanghai’s Noodle Bar is the place to go for your complimentary Asian cuisine at lunch and dinner. The Garden Cafe is the required cruise ship buffet, serving food nearly all day long, 6 a.m. to 11:30 p.m., with just a few short breaks between service, so the staff can reset the buffets. Uptown Grill is another buffet, but it’s on the smaller side (though that doesn’t mean you’ll necessarily run into crowds here) and it focuses on American fare primarily.

Lastly, The Haven restaurant is included as a complimentary dining option, but only for Haven VIP guests. It’s another traditional cruise ship restaurant, like Savor and Taste, but the menus are a bit more upscale.

Oh — and you can also get some room service items for free, if you’re in a Haven stateroom or a suite. Otherwise, you can still get complimentary room service for some items, but you’ll have to pay for a convenience fee and your gratuity.

6. Upgrading your dining experience is both easy and well worth it

On some cruise ships, sure, it doesn’t make sense to eat anywhere other than those restaurants that are included in your cruise fare. However, that’s not the case with Norwegian Breakaway. Norwegian Cruise Line as a whole knows how to do culinary experiences well, and so any upgrades you’ll make to your dining while on a Breakaway cruise will be well worth the money.

As you can see, there are so many different options when it comes to dining aboard Norwegian Breakaway.

And, if you want to take things further, you can always book a spot at the Chef’s Table, where you’ll enjoy an intimate dining experience alongside 11 of your fellow cruisers. Over three hours, diners enjoy a true foodie experience coordinated by the executive chef.

Other similar experiences available for booking are the Cirque Dreams and Dinner, and Wine Lovers the Musical, two dinner and a show-type experiences.

7. Bar experiences include new venues that came about in the ship’s 2018 refurbishments

Norwegian Breakaway did get some new additions when it underwent some refurbishments in 2018, and these additions extend to the ship’s bars and lounges. At that time, Norwegian axed its previous Fat Cats Jazz and Blues Club and replaced it with a new Norwegian venue, completely new to the cruise line as a whole, Syd Norman’s Pour House. The concept is a rock bar and lounge with specialty cocktails and live music with all your favorite classic rock hits.

Even if you’re not into the rock bar concept, though, you’ll still find great bars and lounges all across the ship, many where music and drinks go hand-in-hand. Try Mixx Bar, next to two of the main dining rooms; Atrium Bar, for people-watching; O’Sheehan’s Bar, for a pub feel; Bliss Ultra Lounge, a disco-themed watering hole; Prime Meridian, which provides a club experience; Maltings, for your favorite beers and whiskeys; Shakers, a cocktail bar; several bars situated around the pool; a Svedka Ice Bar (which is exactly what it sounds like); and the Uptown Bar & Grill, a casual outdoor spot. The Haven Lounge offers drinks to Haven guests only.

8. Special hideaway spots are just a short walk away

Need a little peace and quiet away from the more crowded spots on the ship? You can find it. Norwegian Breakaway hosts a library and card room, with books and games. There’s a mini-museum dedicated to The Rockettes, the ship’s godmothers.

An internet cafe allows you to check your email if you don’t want to splurge on an entire WiFi plan. Then, of course, if you want to do just a little quiet shopping, you can find lots to pick over, from clothing to jewelry, international wines and spirits to toiletries.

9. And don’t forget about the kids! They’ll have an awesome time, too

Lastly, don’t forget about the children in your traveling crew. What kind of cruise ship would Norwegian Breakaway be if it didn’t have endless entertainment options for the kids as well?

From tots to teens, everyone has their own space and way to play aboard this cruise ship. Teens have their own club-like environment at Entourage, with team-building events, games, themed nights and parties. Younger kids enjoy Splash Academy, where children are split into groups and given enriching programming in a supervised setting. Infants over the age of 6 months also have their own programming (though parents are asked to participate).

So, ready to take your Norwegian Breakaway cruise?

How many swimming pools are on Norwegian Breakaway?

The ship has a main pool on its Deck 15, four hot tubs and then a separate pool in The Haven (for VIPs only).

What other NCL ships are the same as the Norwegian Breakaway?

Launched in the spring of 2013, Norwegian Breakaway was one of the first two ships in the Breakaway series that Norwegian Cruise Line ordered, alongside sister ship Norwegian Getaway.

How large is the Norwegian Breakaway cruise ship? 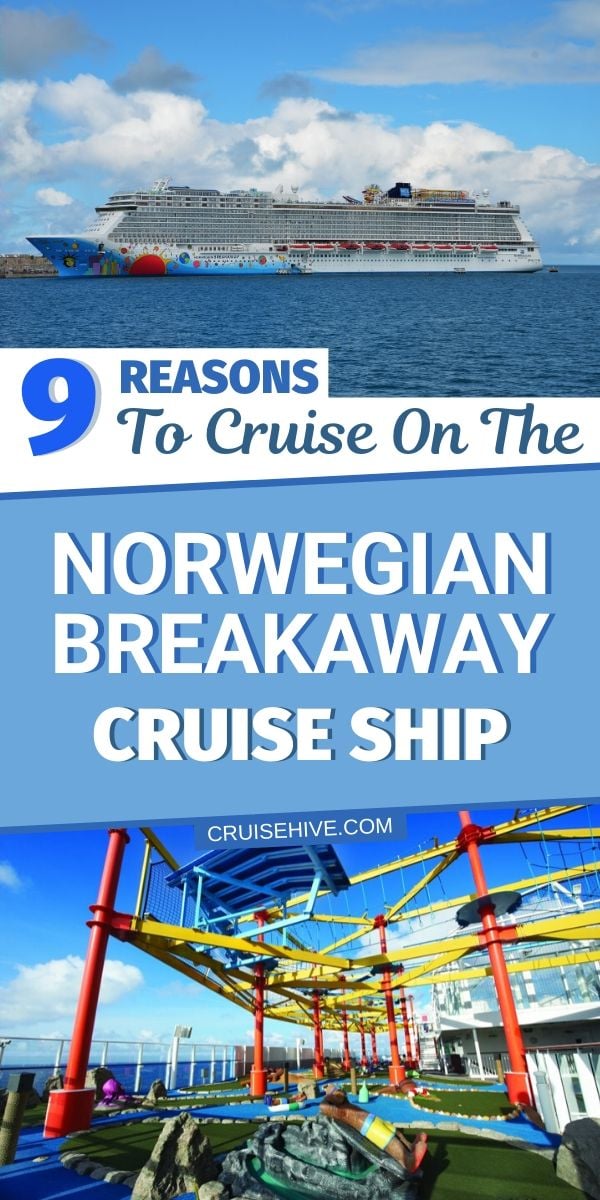